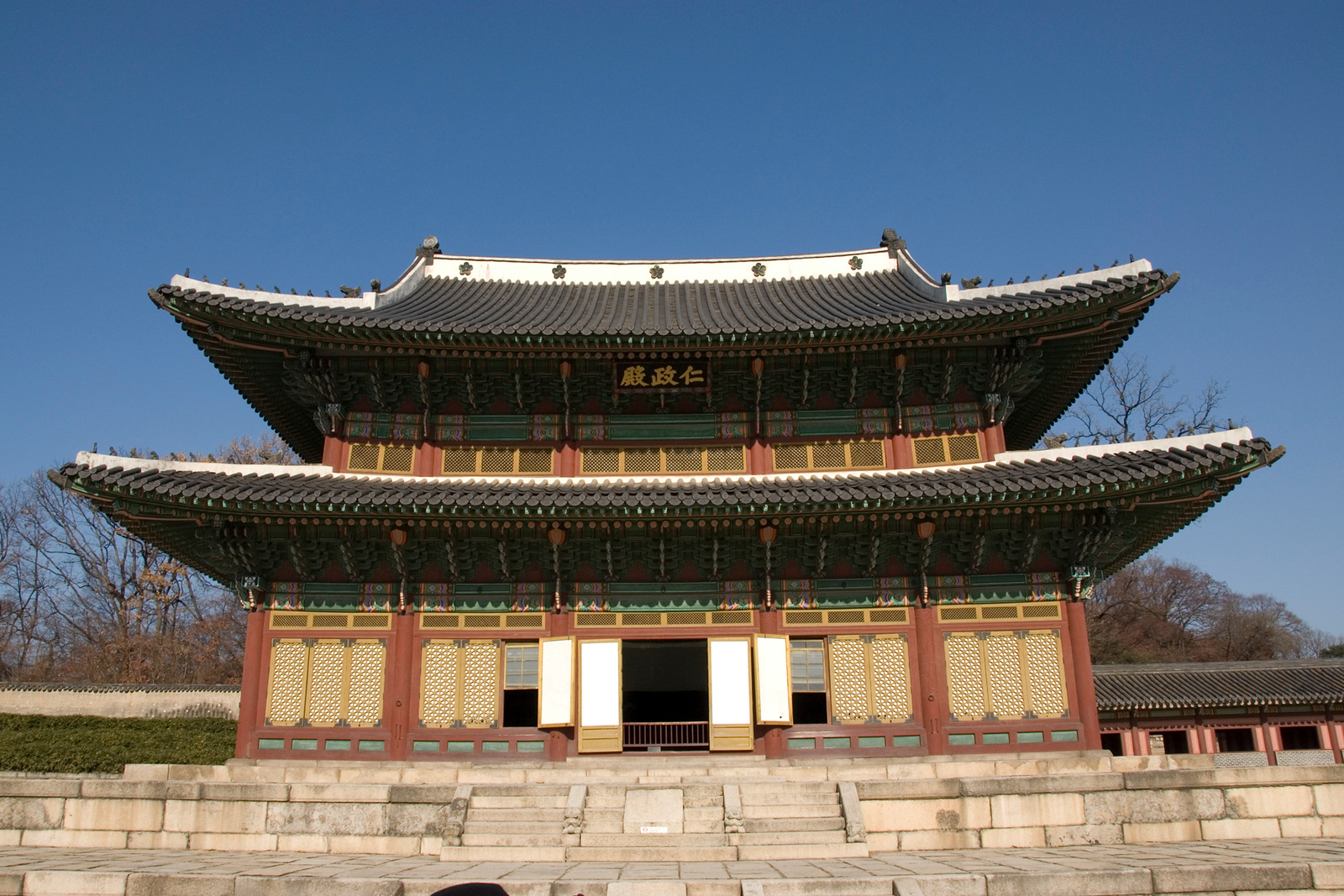 From the World Heritage inscription for the Changdeokgung Palace Complex:

In the early 15th century, Emperor T’aejong ordered the construction of a new palace at an auspicious site. A Bureau of Palace Construction was set up to create the complex, consisting of a number of official and residential buildings set in a garden that was cleverly adapted to the uneven topography of the 58-ha site. The result is an exceptional example of Far Eastern palace architecture and design, blending harmoniously with the surrounding landscape.

The Changdeok Palace sits in central Seoul and is an intact, impressive former seat of the Korean monarchy. Unfortunately, the palace seems rather sterile because all of the artifacts and furnishings have been removed. It is a collection of mostly empty buildings. Unlike most World Heritage sites, you can’t just buy a ticket and stroll about the grounds. You have to have a tour guide, and tours leave about every hour/half hour in different languages. Tours last about an hour.

It is situated across the street from the Jongmyo Shrine, which makes it easy to visit both world heritage sites in a single trip.

This was the second royal villa that was constructed for by the Joseon Dynasty following the completion of the Gyeongbukgung Palace during the early 15th century.

History of the Palace

The Changdeok Palace was the primary palace that was used by the kings of the Joseon Dynasty since it is the best-preserved out of the five royal Joseon palaces. There is also a public palace area within the palace grounds, along with a royal residence and rear garden. The rear garden in itself contains a gigantic tree that is over 300 years old. The garden features a pavilion and a small pond.

The palace gained importance when the 9th king of the Joseon Dynasty took his seat. From then on, a number of kings had used it as a royal residence. However, it was destroyed by fire in the late 16th century after the royal family abandoned their abode during the time of the Japanese invasion in Korea. The angry citizens burned the palace down. It was restored in 1611.

Below are some important structures and buildings that belong to the Changdeok Palace and UNESCO World Heritage Site property:

Donhwamun Gate: The main gate to the palace, this structure was built in 1412. It is a two-story, pavilion-type structure destroyed during the Japanese invasion but was restored in the early 17th century.

Geumcheongyo Bridge: This bridge was built in 1411 and the oldest bridge that still exists today in Seoul.

Injeongjeon Hall: This is a National Treasure and serves as the throne hall of the Changdeok Palace.

Seonjeongjeon Hall: This serves as the office for the ruling officials.

Huijeongdang Hall: This used to be the bedchamber for the king but later became his workplace.

Daejojeon Hall: This is the official residence of the queen.

Juhamnu Pavilion: This is the site of the royal library.

Yeon-gyeongdang Residence: This is the audience hall that was built in the fashion of the typical literati house.