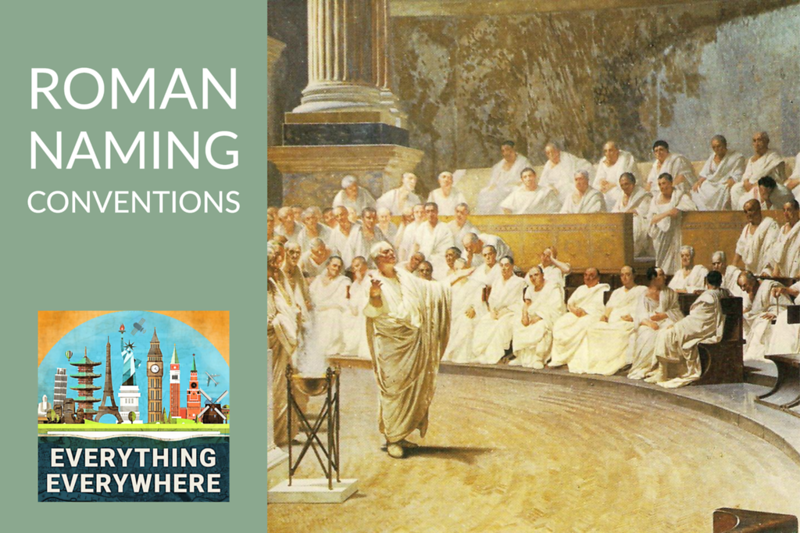 One of the most complicated naming systems in history had to be that used by the ancient Romans. They had a very elaborate system for naming people, with different rules for men and women, and even special rules if you were adopted.

Learn more about Roman naming conventions on this episode of Everything Everywhere Daily.

The genesis of this episode came from a time when I was explaining how Icelandic naming conventions worked. There are different systems for how people are named all over the world, and that is going to be the subject of a future episode, sooner rather than later.

As I began doing research, I wanted to talk about the history of how people were named, and I realized that explaining how the Roman naming system worked was going to take up most of the episode, so I figured I’d do a separate show on it.

The essence of the Roman naming system was known as the Tria nomina, or three names.

You might be thinking that if there are three names, it must be like the modern western naming system where people have three names: a first name, a middle name, and a last name.

However, that is not quite the case.

The three parts of the tria nomina were the praenomen, the nomen, and the cognomen.

I’m going to start by explaining the system for men, which was different than the system used for women.

Just so you have a reference, I’ll use as an example a name that you might be familiar with: Gaius Julius Caesar.

The praenomen was the first name. So, in my example, the praenomen used by Caesar was “Gaius”.

The thing was there weren’t many praenomens that were in use. In the early republic, there were maybe 3 dozen praenomens, and that dropped down to about 18 in the first century BC.

If you ever hear of any story in ancient Rome, it will be filled with guys named Marcus, Gaius, Lucius, Sextus, Tiberius, Publius, etc.

Also, the eldest son of a Roman would usually get the exact same praenomen as his father.  Subsequent boys would be given the praenomen of uncles or other ancestors.

There is of course a massive problem with every man getting the same praenomen as his father, and there only being about a dozen and half praenomen to go around. It would get real confusing real quick.

Practically, only close friends and family would refer to someone by their praenomen.

This problem was partially alleviated by the second name, the nomen.

This is where the three-name system differs from the modern western system. The nomen isn’t a middle name. It is a family name, but not quite a family name.

In Latin, it would refer to what was known as a gens. The closest thing I can think of which would describe a Roman gens would be a Scottish clan. It is an extended kinship with a common, if often remote, ancestry. If your last name is Macalister, for example, you can claim membership in clan MacAllister, even if you aren’t closely related to other people in the clan.

In my example above, Gaius Julius Caesar was a member of the gens Julia, which was a very ancient clan, patrician clan.

One of the things which became common in the later Empire as Roman citizenship was expanded to more and more people, was for these new citizens to take the nomen of the Emperor who bestowed citizenship on them.

In the year 212, Emperor Marcus Aurelius bestowed citizenship upon every free adult male in the empire. This led to a whole bunch of people who adopted the nomen Aurelius, who otherwise might not have had a nomen because they weren’t Roman.

Just having two names, one of which was very common, didn’t actually solve the problem of a unique identity as some clans were rather large.

The final part of the tria nomia was the cognomen. The cognomen was was more of an actual family name that was used within a clan. Going back to my Scottish clan example, you might be one of the Glasgow Macalesters as opposed to the Aberdeen Macalesters.

The thing is, the cognomen actually developed as a nickname that just became hereditary.

Caesar wasn’t hairy, in fact, he was notoriously going bald, and Strabo wasn’t cross-eyed. However, at some point in the past, they had an ancestor who was, and the name just stuck.

Just to make things more complicated, there was also a fourth name that was often used in the tria nomia which was known as the agnomen.

An agnomen wasn’t something that most Romans had, but it further helped distinguish men with similar names.

An agnomen was sort of an honorific which became hereditary. For example, when Publius Cornelius Scipio defeated Hannibal at the Battle of Zama in Carthage, he was given the agnomen Africanus.

This was a common practice for generals who conquered a particular territory. Germanicus, Britannicus, Gothicus, Asiaticus, were all agnomens given out.

Augustus was an agnomen used by all subsequent emperors.

In the later empire, more names began being used by the upper class as there were attempts to add in names that represented their maternal ancestry as well. If you were related to an emperor through your mother’s side of the family, for example, then you would want to have that in your name so everyone knew it.

One other wrinkle is that sometimes if you really wanted to be specific and formal when referring to someone, you would use the person’s filiation. Filiation is just referencing who that person’s father was.

They wouldn’t be used in normal speech, and you can usually find them on inscriptions for tombs and on buildings.

When a son was adopted, he would take the name of their adopted father, except that he would usually use the diminutive of his previous nomen as his agnomen. For example, when Gaius Octavius was posthumously adopted by Julius Caesar, his new name became Gaius Julius Caesar Octavianus.

The naming convention for women was very different.

I should note that Rome was a patriarchal society. By that I don’t mean it in the way the term is used today, I mean it in a very literal sense. The “patri” in patriarchal is the Latin word for father, and the father, aka the paterfamilias, literally had the power of life and death over his family.

For example, the daughter of Gaius Julius Caesar was simply known as Julia.

What if there were more than two daughters, you might be wondering? Then, just like the sons of the boxer George Foreman, they would be numbered.

If a family had four daughters named Julia, they would be Julia Maxima, Julia Secunda, Julia Tertia, and Julia Quarta.

Over time, in the imperial period, the practice of naming women expanded, and often times more than one name would be given. The second name would often come from the mother, another female relative, or just a male relative from the other side of the family.

These second names replaced the tradition of numbering daughters by just giving them individual second names. For example, the wife of Augustus, and one of the most powerful women in Roman history, was Livia Drusilla. Both her names came from her father Marcus Livius Drusus Claudianus.

She was later formally adopted into the Julian clan and she was then known as Julia Augusta.

I should finally note that women did not change their name when they got married, including their family name.

I’ll end by showing just how confusing all of this can be by going through the progression of the changes to the name of the first emperor Augustus.

He was born Gaius Octavius.

His father then added a cognomen so he was Gaius Octavius Thurinus.

After he was adopted by Julius Caesar he would have become, Gaius Julius Caesar Octavianus, however, he never used this because he wanted to play up his ties to Caesar.

When Caesar was deified and declared a god by the senate, he started to go by Gaius Iulius Divi Filius Caesar, or Gaius Julius son of the divine Caesar.

When he was given the title imperator, he then went by Imperator Caesar Divi Filius, which is Emperor Caesar, son the divine.

Then he was given the title Augustus, and his name became Imperator Caesar Divi Filius Augustus.

His full title at the time of his death, translated into English, would have been Emperor Caesar Augustus, son of the divine, Pontifex Maximus, Consul 13 times, hailed Imperator 21 times, held tribunate power for 31 years, and father of his country.

Finally, after he died he simply became known as the Divine Augustus.

If this all seems sort of confusing, that is because it was. Usually, in casual use, even the Romans would just refer to someone by their cognomen, which is why Caesar is known as Caesar, and Cicero is known as Cicero.

All of this fell apart when the western empire collapsed and naming conventions became radically simplified. That, however, I will leave for another episode.

One of the best podcast that I’ve [listened to], rich and interesting information and well explan[ined]. Thanks.

Obrigado, Marco! I am happy to say that you are my first review from Brazil. I’ve only been able to visit a small part of your country so far. I’ve only been over the border to see Iguazu Falls. I was supposed to visit Rio two years ago, but the pandemic stopped that.

Remember, if you leave a review or send in a boostagram, you too can have it read on the show.