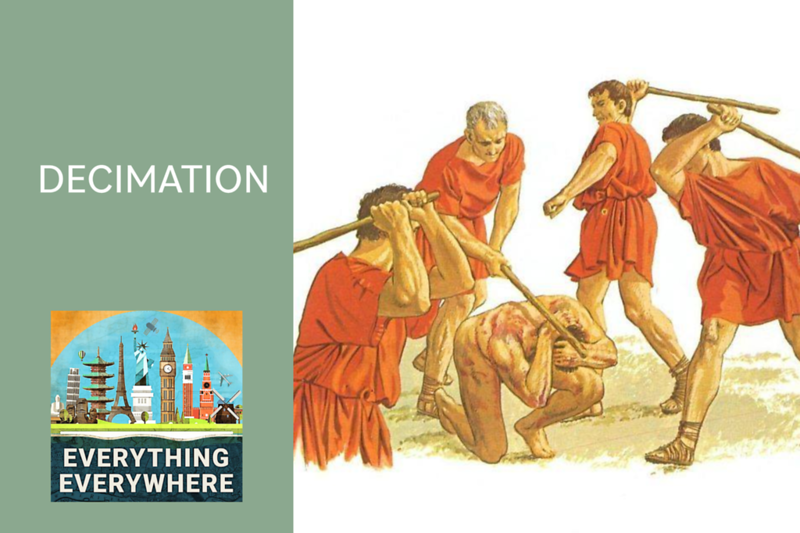 You are probably familiar with the term decimation. The word is usually used in English to mean “to cause great destruction or harm”.

However, to ancient Rome, the word had a very different and very specific meaning.

It was one of the most devastating and brutal forms of punishment that the military could inflict.

Learn more about Decimation, the ultimate collective punishment, on this episode of Everything Everywhere Daily.

Today’s audiobook recommendation is Caesar’s Legion: The Epic Saga of Julius Caesar’s Elite Tenth Legion and the Armies of Rome by Stephen Dando-Collins.

Stephen Dando-Collins paints a vivid and definitive portrait of daily life in the Tenth Legion as he follows Caesar and his men along the blood-soaked fringes of the Empire. This unprecedented regimental history reveals countless previously unknown details about Roman military practices, Caesar’s conduct as a commander and his relationships with officers and legionnaires, and the daily routine and discipline of the Legion.

Warfare in the ancient world required one thing more than anything else. Discipline.

Soldiers would fight shoulder to shoulder and would fight as one giant unit. Whether it was Greek or Roman, or Persian, they had to march, fight, and maneuver as a group, or else they would get killed.

The worst thing that could happen would be for soldiers to break ranks. Once a cohort broke apart and began to flee, the battle was over.

Much of the discipline and drilling which Generals put their troops through was to avoid this single outcome.

When it did happen, the soldiers which fled would often put an entire army at risk. As such, generals reserved their harshest punishment for soldiers who broke ranks.

A decimation was literally that. Generals would take the unit which was to be punished, and it was always a group, and order them into groups of 10 men.

Each group of 10 men would draw straws. The man who had the shortest straw would then be beaten to death by the other nine.

This is where the term “drawing the short straw” comes from.

The threat of being executed wasn’t necessarily the worst part of the punishment.  It was being forced to beat to death someone you might have spent years fighting side-by-side with, and might even be your best friend.

The first recorded example of it happing in the Roman Republic occurred in 471 BC. During one of the early wars against rival tribes on the Italian peninsula, Roman troops were under the command of the consul Appius Claudius Sabinus Regillensis.  One of the units fled during combat and Appius ordered them to be decimated.

All of the officers were scourged and beheaded, and all of the remaining men were divided into groups as I described above, and one in ten were bludgeoned to death.

There wasn’t another case of decimation in Rome for four hundred years.

In the year 71, Rome was fighting the Third Servile War. This was the massive slave revolt that was led by the gladiator Sparticus.

The commander was Marcus Licinius Crassus, who was part of the First Triumvirate and one of the richest men in history.

He actually implemented decimations several times and it is estimated that the number of soldiers killed through his decimations ranges from 1,000 to 10,000.

Often times the real benefit to decimation wasn’t performing the punishment itself, but just the threat of it.

Julius Caesar never was known to perform a decimation, which might have been one of the many reasons why his troops loved him so much.

However, in the civil war against Pompey, he did threaten to decimate his 9th Legion, and that stopped them from breaking ranks.

Marc Antony decimated one of his legions in his war against the Persians. The historian Plutarch noted:

Antony was furious and employed the punishment known as “decimation” on those who had lost their nerve. What he did was divide the whole lot of them into groups of ten, and then he killed one from each group, who was chosen by lot; the rest, on his orders were given barley rations instead of wheat.

After the fall of Marc Antony and the end of the Republic, decimations decreased dramatically under the Roman Empire.

It was done under several early Emperors such as Augustus but as the army became more professional and powerful, they simply refused to follow decimation orders.

The emperor Macrinus formally adopted centesimatio which was basically the same thing as a decimation, but with one out of every one hundred soldiers.

Perhaps the most infamous case of decimation occurred in the year 286 with the Theban Legion.

The legion got its name because it was stationed in Thebes, Egypt. They were commanded to move to Gaul by the Emperor Maximian to help put down a rebellion. The legion supposedly had converted en masse to Christianity.

Along the way, in what is today Switzerland, they encountered another group of Christians and they were ordered to fight them.

Their general told them that if they didn’t follow orders they would be decimated. They refused, so every 10th man was killed. They didn’t kill each other as they would have refused.

After the decimation, they were once again ordered to fight other Christians and they refused. So, they were decimated once again.

The decimations continued until all six thousand, six hundred and sixty-six men were killed.

Today, the members of the Theban Legion are considered martyrs in the church, and their leader, Saint Maurice has been especially venerated, the city of St Moriz in Switzerland is named after him. In fact, his story is interesting enough that I might do a separate episode on it at a later date.

You might think that the practice of decimation ended centuries ago, but unfortunately, that is not the case.

There have been cases of decimation in the 20th century.

During World War I, Italian commander Luigi Cadorna decimated a unit at the Battle of Caporetto. It was mostly random executions, but there was an actual decimation on the 120 men of the 141st Catanzaro Infantry Brigade who mutinied.

During the Russian Civil War, Leon Trotsky decimated one of the units under his command for desertion.

The last known case occurred during WWII during the Battle of Stalingrad when the commander of the Soviet 64th Rifle Division decimated the unit for cowardice.

So, the next time you hear that something was decimated on the news, take a moment to think about how the original meaning of the word had to do with soldiers having to beat their best friends to death as a punishment.