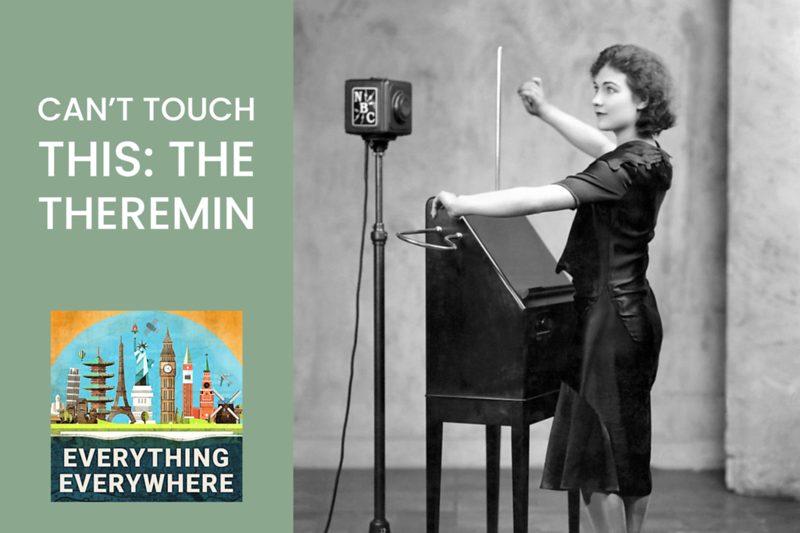 You are probably familiar with the four basic types of musical instruments: strings, woodwinds, brass, and percussion.

However, is it possible to have an instrument that doesn’t fit into one of these families?

In the early 20th century, Russian inventor Leon Theremin came up with an instrument that doesn’t fit into any family and doesn’t sound or play like any other.

Learn more about the theremin, the world’s first electronic instrument, on this episode of Everything Everywhere Daily.

This episode is brought to you by Skillshare.

I briefly tried playing an instrument when I was in grade school. I had a trumpet and I was horrible. Like really, really bad.

I wonder how good I could have been if I had Skillshare. Skillshare has hundreds of online courses to teach you music. Everything from music theory, to specific lessons in instruments like piano, saxophone, drums, violin, and even the trumpet.

I don’t think it is an exaggeration to say that there is no other instrument that is even remotely like the theremin.

The theremin is an electrical instrument, but it isn’t anything like an electric guitar or a keyboard synthesizer, which were both invented later.

That sounds really simple, but many people consider the theremin to be the hardest instrument in the world the play.

The primary difficulty is that you don’t touch anything.

Your hands float in mid-air and you don’t have keys, valves, or strings that limit where you can put your fingers to guide what you are playing.

The sound of a theremin can only be described as unique. Here is a short clip of German theremin soloist Carolina Eyck performing the scales:

The development of the theremin came about from Soviet research into proximity sensors. They were trying to develop ways to sense objects using electromagnetic waves without physical contact.

One of the researchers was named Lev Sergeyevich Termen, or as it is known in the west, Leon Theremin.

Theremin had developed what was a very rudimentary motion detector. When something was placed in proximity of an antenna, it would change an electrical signal.

His boss told him to find other uses for the tool, so he added circuitry to create an audio tone. After doing that, he realized that the pitch of the sound would change based on how close he was to the antenna.

Having learned the cello at a young age, he played around with it to see if he could make different notes to play something. He October 1920 he called in his colleagues and some students to demonstrate his invention which was originally dubbed the Etherphone and later the Thereminvox.

It was the world’s first electronic instrument.

The first song ever played on the theremin in that first demonstration was The Swan by Camille Saint-Saëns. The Swan has been compared for theremin players as to what Stairway to Heaven is for guitar players. It is one of the first things which everyone learns.

He eventually added a second antenna to control volume and in November 1920 gave his first public performance.

The new instrument was a hit with the Soviet hierarchy. Theremin even gave a demonstration to Lenin who loved it.

He was sent out on a lengthy tour to promote the new instrument and to secure patents in major capitalist countries. The Soviets saw this as a way to make money off of the capitalists.

At the end of 1927, he found his way to New York. There he was granted a patent for the instrument, performed with the New York Philharmonic, granted manufacturing rights to RCA, and renamed the device the Theremin.

Theremin decided to stay in the United States, where he started a laboratory and began work perfecting the theremin and created other electronic musical instruments.

It was in New York that he met another Soviet exile, Clara Rockmore. She was a violin prodigy who developed tendonitis in her elbow which caused her to give up the violin. However, when she met Theremin, she took to the instrument immediately and became the first major theremin virtuoso.

Here is a short clip of her playing The Swan:

The 1930s were the golden age for the theremin.

There were all electronic concerts at venues like Carnegie Hall. Composers were writing music expressly for the theremin. Clara Rockmore went on a nationwide tour performing the theremin in concert halls.

Theremin himself worked with the short-lived American Negro Ballet Company where he met and married the prima ballerina Lavinia Williams. As she was black, it caused an uproar in social circles in New York, but the couple remained together.

That was until 1938 when Theremin simply disappeared. He had made a call to his wife to indicate that some Russian men had broken into their apartment and then wasn’t heard from again for 30 years.

He wound up back in Russia, probably abducted by NKVD agents, put on a ship, and ended up working in Soviet prison camps. He did return to American until just before his death in 1993.

After World War II, the popularity of the theremin dropped dramatically. Its primary use was as a sound effects tool for 50s science fiction movies. If you’ve heard a theremin, you’ve probably heard it in this context, and you might not have even known it was an actual musical instrument.

In the 50s a young electrician named Robert Moog began building theremins in high school and eventually sold kits for people to make them at home.

If his name sounds familiar it is because Robert Moog was the inventor of the Moog Synthesizer, the world’s first electronic synthesizer keyboard. The Moog corporation is still the world’s premier producer of theremins today.

In the 60s, there was a bit of a rediscovery of the theremin.

The Beach Boys used a similar instrument called an electro-theremin on the song Good Vibrations.

Led Zeppelin used a theremin on the songs Whole Lotta Love and No Quarter. Jimmy Page would often play a theremin on stage during concerts.

In 1993 a documentary titled Theremin: An Electronic Odyssey resulted in a brief resurgence in the popularity of the instrument.

Today, there is a very small but passionate theremin community. You can easily find music on YouTube from theremin instructors and soloists. There are some works which, while not written for the theremin, lend themselves to it exceptionally well. In particular, works that were originally written for female voices.

Songs such as the theme to Once Upon a Time in the West, the Diva’s Dance from the movie the Fifth Element, or Great Gig in the Sky by Pink Floyd have lent themselves to excellent interpretations on the theremin.

There are a few professional theremin players in the world who will occasionally work with symphony orchestras to showcase the instrument.

If you are interested in the theremin, you can buy simple build your own kits for as little as $30. Higher quality, more elaborate Moog Claravox theremin will run you about $1,500.

If you do choose to pick up the theremin, you’ll be playing one of the most unique and difficult instruments in the world.