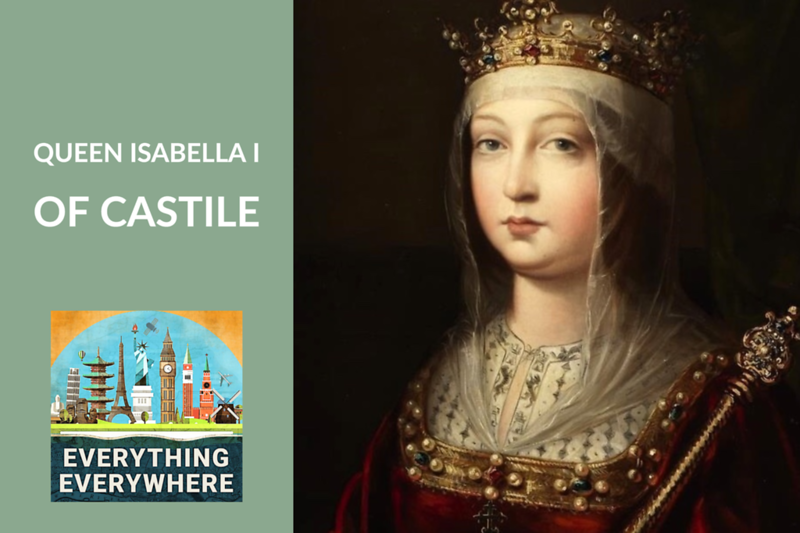 She was never intended to be a queen. She wasn’t the firstborn and the rules of the time didn’t support her as a woman. Yet through cunning and guile, she managed to take power.

As a queen, she was at the center of many of the most significant and notorious events in European history, and she was largely responsible for the creation of the country which became Spain.

Learn more about Isabella I of Castille and how she influenced the history of Europe on this episode of Everything Everywhere Daily.

This episode is sponsored by the Tourist office of Spain.

Queen Isabella traveled extensively in Spain, so there are many places in the country that have a connection to her life.

There is the Castle of Arévalo where she grew up as a child.

The Alcázar of Segovia is the place where she was proclaimed the queen of Castile and Leon.

The Royal Monastery of Santa María of Guadalupe was a place she was a frequent visitor.

One of her favorite homes was at the Alcazar of Cordoba,

And Queen Isabella’s grave is at the Royal Chapel of Granada.

Isabella was born to King John II of Castile and Isabella of Portugal in 1451. At the time of her birth, the country we know as Spain today didn’t exist. It was a collection of kingdoms and a Muslim emirate in Granada.

At her birth, she was a highly unlikely candidate to assume the throne of Castile.

For starters, she was female at a time when European kingdoms were passed along male bloodlines. Secondly, she was born in the wrong order. At the time she was born, she had an elder half-brother Henry who was already 26 and was the heir to the throne. Then, a year after she was born, a younger brother, Alfonso, was born, putting her third in line to the throne.

When her father King John died in 1454, three-year-old Isabella and her mother were sent to Arévalo to live in a dilapidated castle by the new King and her half brother, Henry IV. Despite being royalty and living in a castle, she and her mother and brother were basically living in poverty.

Henry didn’t have any children with his first wife and he got the marriage annulled, but not before an extremely embarrassing ecclesiastical inquiry where he developed the nickname “Henry the Impotent”.

He then married the daughter of the King of Portugal to establish an alliance with them, and eventually had a daughter named Joanna.

Soon after the birth of Joanna, Isabella was moved to the court of Henry in Segovia where she was separated from her mother.

Despite the privations Isabella had growing up, the one thing she didn’t lack was an education. She was trained in grammar, mathematics, art, music, and Latin. Moreover, she paid very close attention to what was happening politically with the neighboring kingdoms, despite that her brother tried to keep her protected from such matters.

A group of nobles began to pressure Henry to name his half brother, and Isabella’s younger brother, Alfonso as his heir. Henry agreed, but only if Alfonso was betrothed to his daughter Johanna.

Henry tried to back out, which caused a rebellion amongst the nobles, who then crowned the young Alfonso as king.

Alfonso then died three years later, which then left Isabella next in line.

Isabella was a teenager when this happened, and she had political smarts even at this age. The nobles pressured her to seize power now. However, she had the patience to wait. She agreed to continue to recognize Henry if she was named heir. Her condition was that she wouldn’t get married against her will.

Here we have to talk about her marriage.

Like many aristocratic women of the time, Isabela was in line for an arranged alliance marriage. With her arrangement with Henry, however, she instead could choose her husband and would only have to notify Henry.

Isabella didn’t want any of that. She decided to marry Ferdinand, the heir to the kingdoms of Aragon and Navarre, who oddly enough, she was originally betrothed to when she was six.

Ferdinand was technically the second cousin of Isabella, so they had to get a papal dispensation to get married. The papal dispensation was facilitated by one Cardinal Rodrigo Borgia who later became Pope Alexander VI, one of the most corrupt popes of all time.

Henry still wanted to marry her off to someone else, so Isabell and Ferdinand concocted stories to get away from their respective royal courts, and eloped. Something which pretty much never ever happened with royal marriages.

On December 12, 1474, Henry died and Isabella was proclaimed queen of Castille and Leon.

The marriage of Ferdinand and Isabella was very much a political one, however, it worked. Their agreement had set firm limits on who had power where. It wasn’t a joint rule per se. They each had defined spheres of power.

Collectively, they were known as the “Catholic Monarchs”, and their marriage was the de facto beginning of the Kingdom of Spain.

One of the first things they set to doing is consolidating power with the intent of unifying the entire Iberian Peninsula. She was absolutely ruthless in her pursuit of power.

Isabella created the Santa Hermandad, or the Holy Brotherhood, which was a type of judicial police force which was designed to keep the nobility in check, in Castile. She didn’t want a repeat of the uprising which happened to Henry.

The Reconquista, which had been slowly pushing the Muslims back for centuries, finally was completed in 1492. This was big news throughout Europe. It was the first time that Christians had actually gained ground against the Muslims since Constantinople fell.

If you had asked people in Europe back then what the most important thing that happened in 1492, this is what they probably would have mentioned.

Speaking of 1492, the thing which Isabella is probably best known for is funding the expedition of Columbus.

This really was mostly Isabella’s call. Columbus had pitched the idea to several other countries, but they passed on the idea because they thought he vastly underestimated the distance to Asia traveling west…which ironically enough, they were correct.

Isabella eventually convened a committee that came to the same conclusion, that Columbus’ calculations were way off. However, they concluded that it was worth the risk. If he was wrong and never returned, they would have lost little, but if he was right, it would make a fantastic return.

It was really one of the first instances of venture financing.

It resulted in the Capitulations of Santa Fe, which gave Columbus financing, titles, and 10% of any money derived from the venture.

The result of this decision eventually led to the creation of the Spanish Empire, which eventually would become the largest empire in the world.

In addition to these really big things which she oversaw, she also took the lead in reforming the laws and finances of the country as well.

Isabella and Ferdinand had five children who survived to adulthood.

The eldest daughter Isabella became the queen of Portugal.

John became the Prince of Asturias, a title which is now the Spanish equivalent of the Prince of Wales and is given to the heir apparent.

Johanna became the Queen of Castile after her mother died, and married into the Hapsburg dynasty, which is how Spain became part of the Holy Roman Empire.

Finally, the youngest child Catherine went on to marry a guy named Henry VIII of England, and their marriage and subsequent divorce sparked the creation of the Church of England.

Isabella unquestionably had an outsized impact on the world. The voyages of Columbus, the completion of the Reconquista, and the Spanish Inquisition were all major events in world history, albeit not always positive.

Isabella’s choice to merge the kingdom of Castille and Leon with Aragon and Navarre was the singular decision that created the modern-day country of Spain.

Her impact could best be described by a German traveler who visited her kingdom during her reign. They noted, “This queen of Spain, called Isabella, has had no equal on this earth for 500 years.”