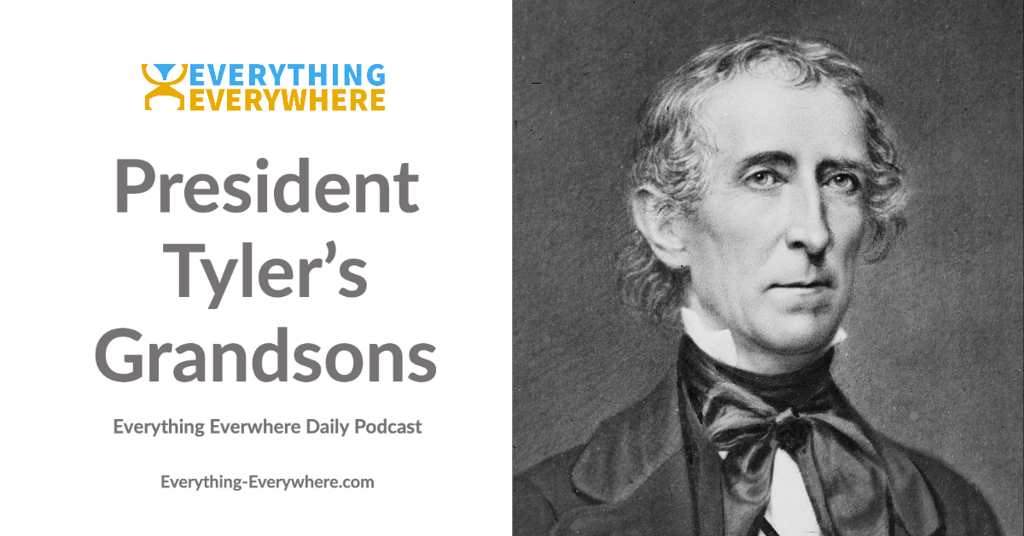 President John Tyler was the 10th president of the United States. He was born in 1790 and is widely considered one of the lesser presidents in American history. If you’ve never heard of him before, don’t worry, as you aren’t missing much.

This episode isn’t about him, however. This is about his two grandsons.

His two grandsons who are still alive in the year 2020, two hundred and thirty years after the birth of their grandfather.

Learn more, and try not to get a nosebleed thinking about it, on this episode of Everything Everywhere Daily.

This episode of Everything Everywhere Daily is brought to you by G Adventures. G Adventures is the world’s premier small group tour operator, offering tours in over 100 countries and all seven continents. In addition, G Adventures has been a leader in the area of responsible tourism, helping to establish social enterprises around the world. When you travel with G, you not only get to explore the world, you also get to help the people in the communities you visit.

…and I speak from first-hand experience. I’ve personally visited over 40 countries on all seven continents on G Adventure tours over the last 10 years, and I can attest to their high ethical standards and the quality of their tours.

To learn more about G Adventures and to find a tour that is right for you, please click on the link in the show notes.

In fact, he’s best known as being the second half of the phrase “Tippecanoe and Tyler too”, which most American students learn in history class. I should note that most of the people who have heard that phrase have no clue what it means or who it is referencing.

His other claim to fame is being the first vice president ever to ascend to the presidency after the death of a president. John Tyler was the Vice-President under William Henry Harrison who died 31 days after becoming president.

Many people assumed that he would just be the acting president, not the actual president of the United States. He was often referred to as “His Accidency” and many people would only refer to him as the “acting president”.

This could all be explained in four simple words: old men, young wives.  However, if I left it at that, it would make for a pretty boring podcast.

To get into the details, John Tyler was a very fecund man. He had 15 children in total, which is the most of any US President.

His first wife was Letitia Christian, who was the same age as Tyler. They married in 1813 and together they had 8 children. However, she died of a stroke in 1842 while she was First Lady.

In 1844, at the age of 54, Tyler married Julia Gardiner who was 30 years younger than her. It was, in fact, the first sitting president to ever be married while in office.

Together they had 7 children. One of those children was Lyon Gardiner Tyler, who was born in 1853 when President Tyler was 63 years old.

Lyon Tyler followed in the family tradition of having children late in life. His first wife died in 1921 when he was 68 years old. He then took a second wife, Sue Ruffin, who was 35 years his junior.

With Sue, he had three children, two of whom lived into adulthood.

Both of these men are still alive today, at the ages of 96 and 92 respectively.

If you are curious (and I was) and want to take this one generation further, President Tyler’s father, John Tyler Sr., the great-grandfather of the two men in question, was 44 when President Tyler was born.

It is not uncommon for people to know their great-grandparents today.

Families with extremely long generations such as the Tyler’s are uncommon, but not unheard of. One contemporary example of this would be the current King of Saudi Arabia, King Salman, who is 84 years old.

His father was the founder of modern Saudi Arabia, King Abdulaziz, also known as Ibn Saud. Ibn Saud was 60 years old when Salman was born.

Ibn Saud was born in 1875, during the reign of Queen Victoria, and during the Ulysses S Grant administration in the United States. That was before Thomas Edison filed the patent on the light bulb.

Just to cap this discussion of really old fathers, I had to find out who was the oldest man on record to ever have a child. That distinction is held by a man in southern India named Ramjit Raghav, who had son in 2010 at the ripe old age of 94, and followed it up two years later by having another son at the age of 96.

After the second child, Mr. Raghav said he wasn’t going to have any more children….

If you’ve enjoyed this show, please subscribe on Apple Podcasts or Google Podcasts, where you will get new content for curious people every day in your podcast player.

Also, please support the show over on Patreon, where you get exclusive content not available anywhere else, merchandise such as t-shirts, and submit ideas for future episodes.

Until next time, stay curious.