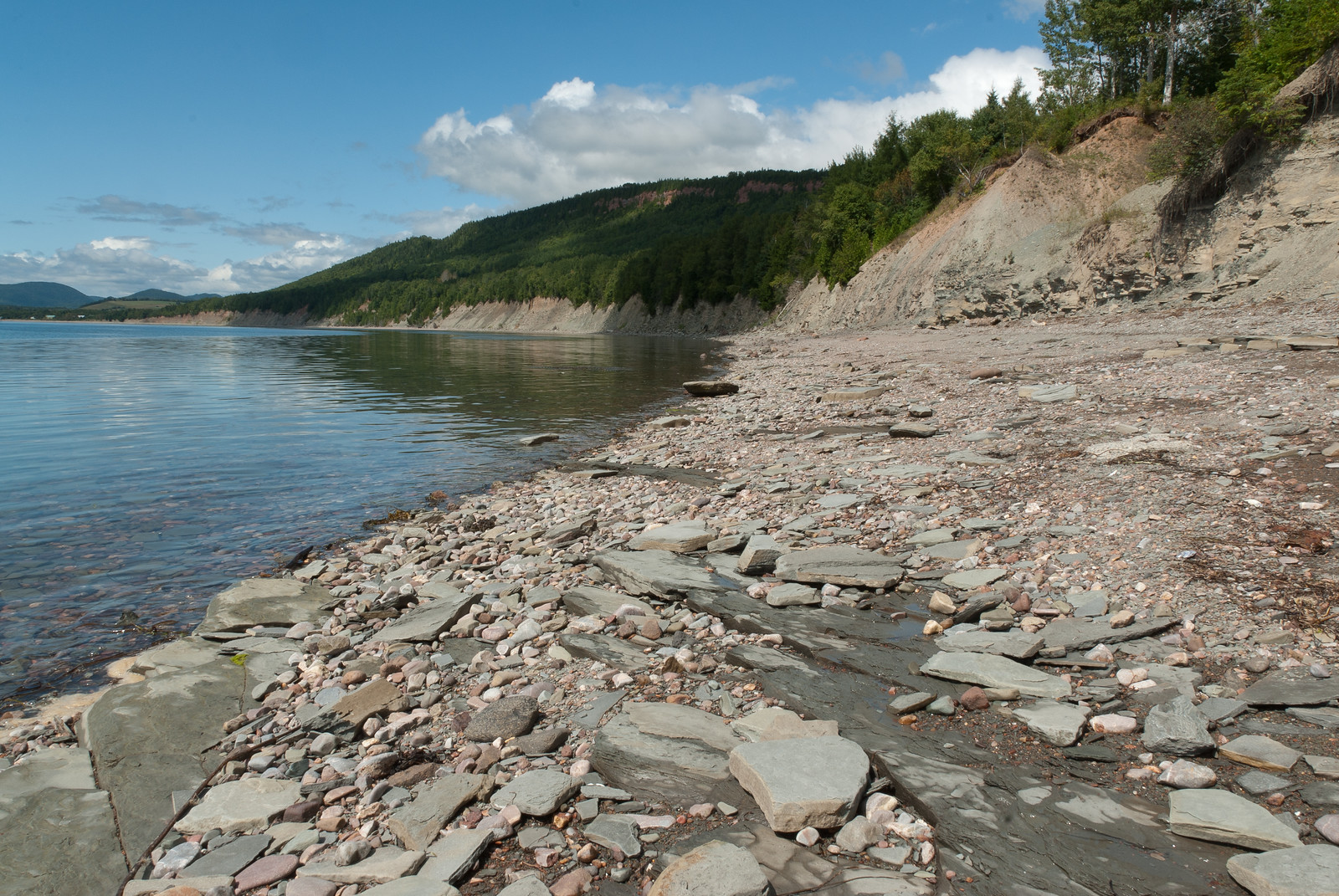 From the World Heritage inscription for Miguasha National Park:

The palaeontological site of Miguasha National Park, in south-eastern Quebec on the southern coast of the Gaspé peninsula, is considered to be the world’s most outstanding illustration of the Devonian Period known as the ‘Age of Fishes’. Dating from 370 million years ago, the Upper Devonian Escuminac Formation represented here contains five of the six fossil fish groups associated with this period. Its significance stems from the discovery there of the highest number and best-preserved fossil specimens of the lobe-finned fishes that gave rise to the first four-legged, air-breathing terrestrial vertebrates – the tetrapods.

It is always difficult to photograph world heritage sites that are of paleontological or anthropological significance. You can’t take photos of fossils in situ. Taking photos of a museum isn’t that interesting. Thankfully, Miguasha is located on the very beautiful boundary between the St. Lawrence River and the ocean.

Miguasha National Park is a natural UNESCO World Heritage Site in Canada. This national park is located in the Gaspe Peninsula in Quebec province. The property covers more than 83 hectares of land area and was established in 1985. It has a buffer zone of 775 hectares in land area. However, it was designated as a heritage property in 1999.

Miguasha National Park is known for its wealth of fossils. These fossils are considered important in the study of the evolution of life on Earth. This national park is also known as the Miguasha Fossil Site or the Hugh-Miller Cliffs.

The Miguasha National Park is located on the southern coast of Quebec’s Gaspe Peninsula. It is one of the most well-known archaeological sites in the world. It was Abraham Gesner who discovered this site in 1842. The fossils that he gathered from the site were sent to the Royal Scottish Museum and the British Museum. The news about the fossil site quickly spread and there were even talks of the site’s privatization. However, the Quebec government stepped in and declared it a provincial park. Eventually, it was elevated into a national park status.

Since it was established as a national park, there were over 5,000 fossils that had been identified from the site. They were studied further by paleontologists. As of 1999, the protected area and fossil site are a UNESCO World Heritage Site.

In addition to the fossil collection at Miguasha National Park, it is also known for its rich biodiversity. There are several species of plants, algae, vertebrates, invertebrates, and microorganisms found within its landscape.

The site is believed to be the most outstanding collection of fossils from the Age of Fishes or the Devonian Period. Carbon dating on the fossils at the site was traced back to this period. There are two distinctive types of fossils found at the site: lobe-finned fishes and the Spermasposita. The Miguasha Natural History Museum is found within the park. Visitors can check out the museum wherein more than 9,000 floral and fauna specimens gathered from the site are on display. Hence, the museum is also one of the national park’s biggest attractions.

Before planning your trip to Miguasha National Park, here are a few things you need to know: