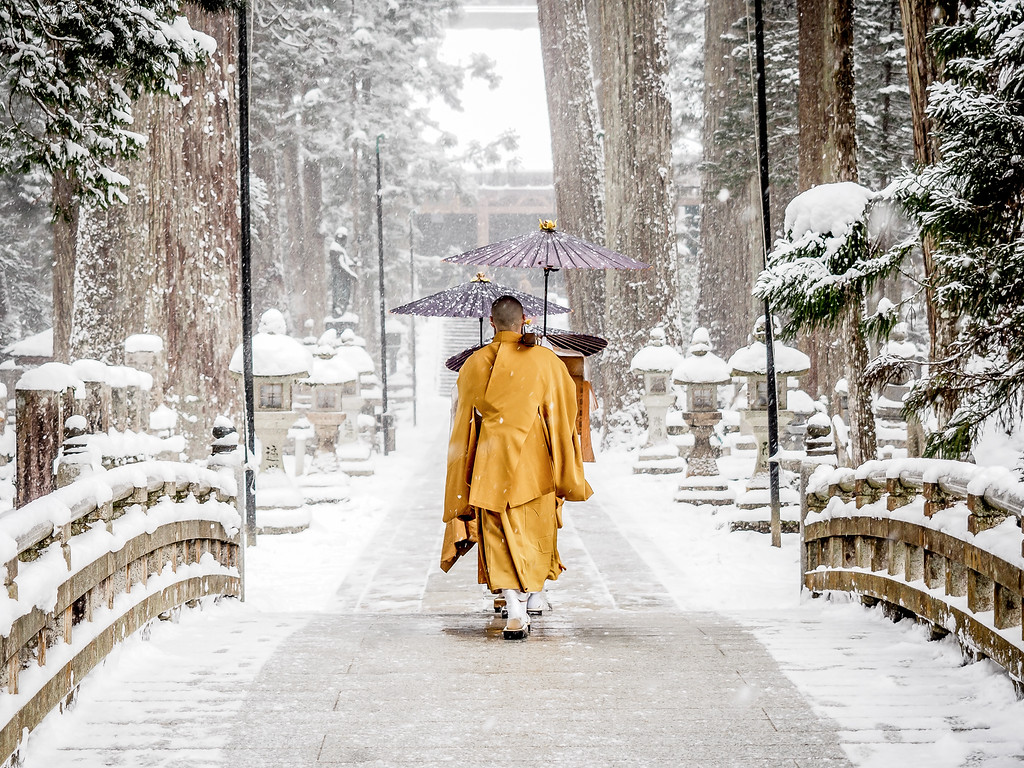 From the Sacred Sites and Pilgrimage Routes in the Kii Mountain Range World Heritage Inscription:

Set in the dense forests of the Kii Mountains overlooking the Pacific Ocean, three sacred sites—Yoshino and Omine, Kumano Sanzan, Koyasan—linked by pilgrimage routes to the ancient capital cities of Nara and Kyoto, reflect the fusion of Shinto, rooted in the ancient tradition of nature worship in Japan, and Buddhism, which was introduced from China and the Korean Peninsula. The sites (506.4 ha) and their surrounding forest landscape reflect a persistent and extraordinarily well-documented tradition of sacred mountains over 1,200 years. The area, with its abundance of streams, rivers, and waterfalls, is still part of the living culture of Japan and is much visited for ritual purposes and hiking, with up to 15 million visitors annually. Each of the three sites contains shrines, some of which were founded as early as the 9th century.

The Kii Mountain Range occupies a wild and remote Peninsula south of Osaka, Kyoto, and Nagoya. It’s home to some of the most important sacred sites in Japan, most of which are connected by a network of pilgrimage trails called the Kumano Kodo. Three of these sites together form one of Japan’s 22 UNESCO World Heritage Sites.

Mount Yoshino’s temples are prominent in ancient Japanese poetry and it’s one of Japan’s most famous cherry blossom viewing spots. Mount Omine is also a pilgrimage destination and home to the headquarters of the Shugendo sect of Japanese Buddhism.

The Kumano Sanzan are three important temples that oversee more than 3000 temples across Japan. One of them, Kumano Nachi Taisha, even overlooks Japan’s highest waterfall.

Koyasan is the headquarters of Shingon Buddhism. It’s home to Okunoin Cemetery, perhaps the most sacred place for Buddhists in Japan. Today, it’s a popular place for visitors to stay in a shukubo (temple lodging) and rise early to observe the sacred goma fire ceremony performed by monks.

When I explored the region, I did a Koyasan temple stay, walked portions of the Kumono Kodo, bathed in ancient Yunomine onsen, and visited the three Kumano Sanzan. These experiences were some of the best highlights of all my travels in Japan.

The origins of the region’s sacred Shinto sites date back to pre-Buddhist times, but later saw the incorporation of Buddhist beliefs. Kukai (Kobo Daishi) one of the most important figures in Japanese Buddhism, settled in Koyasan in 819 and founded Shingon Buddhism.

Kukai is interred in Okunoin Cemetery, where it is believed he is still meditating and awaiting the coming of Miroku (Maitreya), the Future Buddha. This is why so many Japanese aspire to be buried at Koyasan, and it has grown into Japan’s largest cemetery.

Over the centuries, emperors and pilgrims have walked the trails connecting the region’s sacred sites, ritually bathing in hot springs to purify themselves. Tsuboyu Onsen, a tiny two-person hot spring in Yunomine, is the only UNESCO-listed hot spring in the world.

Things to Do in the Kii Mountain Range

Sometimes described as the best place in Japan to see cherry blossoms, most people visit Mount Yoshino when the blossoms bloom (usually around early April). However, the mountain’s many temples and hiking trails make it great to visit at any time of year, and this is the starting point for the hike to the more remote Mount Omine.

Mountain-top Koyasan is a village of temples and a paradise for photographers. There are many walking trails around the village, and staying in one of Koyasan’s 50+ shukubo (temple accommodations) is a major highlight.

Staying in a temple includes dinner and breakfast shojin ryori, or vegan Buddhist meals, which are often served to guests in their rooms, and I was surprised to find that I could even order beer or sake with my temple meal.

Koyasan is quite small, so it’s easy to explore on foot.

The main attraction at Koyasan is Okunoin Cemetery. The cemetery is visually stunning, with 200,000+ gravestones and statues. The trail through the cemetery leads to Torodo Hall, one of the most sacred places in all of Japan.

At the back of Tarodo Hall is the serene tomb of Kobo Daishi, where locals come to pray and meditate. The hall itself contains some 10,000 lanterns, which were donated by worshippers.

One interesting way to visit the cemetery is to take a walking tour at night, offered by the local temples. The cemetery is particularly atmospheric in the dark, with stone lamps to light the way.

Also in Koyasan, Kongobuji is the headquarters of Shingon Buddhism in Japan. The monastery museum showcases beautiful fisuma (Japanese sliding doors) and boasts the largest rock garden in Japan.

Near Kongubuji, Garan is a large complex of temples in the center of Koyasan village. There are at least a dozen beautiful temples and shrines in the large pine tree-filled park, including 45-meter bright orange Konpon Daito Pagoda.

There are three main routes of the Kumano Kodo Pilgrimage. The most popular one, the Nakahechi route, traverses the Kii Peninsula from Hongu on the west side to the Kumano Sanzan on the east side. It takes 2-4 days to walk.

The more difficult Kohechi route connects Koyasan to the Kumano Sanzan, while the Ohechi route runs along the coast. A fourth, lesser-known route connects to Ise Grand Shrine, the most important Shinto shrine in Japan.

The most important of the three Kumano Sanzan, Kumano Hongu Taisha, is in Hongu, a converging point of multiple pilgrimage routes. It is a fine example of wooden Shinto temple architecture. The temple has origins as early as the 9th century, but it was completely relocated from its former riverside location in Hongu after a major flood in 1889.

Also in Hongu and a short walk from Kumano Hongu Taisha, Otorii is Japan’s largest torii gate, weighing 172 tons and 33.9 meters tall. The enormous black gate dominates the countryside and you can walk right under it.

Yunomine, a tiny hot spring village near Hongu, is famous for Tsuboyu Onsen. A small wooden shack built on the riverbed houses a hot spring pool just barely big enough for one to two people.

Visitors can rent the facility for 30-minute time slots. That means you get the whole spring to yourself, where you can bathe in the same spot that emperors once did!

The second, and perhaps least visited of the three Kumano Sanzan is Kumano Hayatama Taisha, located in Shingu, near the east coast of the Kii Peninsula. The shrine’s bright orange structures contrast beautifully with the verdant background, and the enormous shimenawa (sacred ropes) are truly impressive.

The final shrine of the three Kumano Sanzan is Kumano Nachi Taisha. Traditionally, Kumano Nachi Taisha is the endpoint of the main route of the Kumano Kodo pilgrimage, and a really fun way to arrive is to get off the bus a few stops earlier and walk up Daimonzaka trail.

One Buddhist building at the shrine, Seiganto-ji Pagoda, can famously be photographed with Nachi-no-Taki (Nachi Waterfall), the tallest waterfall in Japan at 436 feet (133 meters), in the background.

After exploring the temple, you can hike down to a shrine at the base of the waterfall.

It must be noted that photography is permitted in most, but not all of the sacred sites in the Kii Peninsula. Two notable spots where photos are not allowed are at Torodo Hall in Okunoin Cemetery and inside Kongobuji’s museum, both in Koyasan.

Another thing to consider is that while photography in most of the sacred sites is permitted, it should be done discreetly, as these are active places of worship.

Cherry blossom and autumn foliage seasons are understandably the most popular for photography, but also the most crowded.

To take photos in the low temperatures when I visited the region in winter, I wore fingerless gloves and had to take regular breaks to warm up, but I was always rewarded with stunning images of Koyasan’s temples and Okunoin Cemetery covered in snow.

Mount Yoshino can easily be visited as a day trip by train from Osaka (75-90 minutes). Getting to Koyasan takes about 2.5 hours, involving a train to Gokurakubashi, then a cable car, which is included in the train ticket price, and finally a short bus ride into town.

The best way to access the Kumano Kodo pilgrimage is by bus from Tanabe on the west coast of the peninsula, while the Kumano Sanzan is best reached by train from Osaka or Nagoya, followed by local buses.

You can expect to pay around 10,000 yen (90 USD) for most temple accommodations in Koyasan and simple guesthouses or ryokan in Yoshino or the Kumano Kodo/Kumano Sanzan area. It’s possible to find cheaper hostels, and also possible to spend a lot more.

Weather & When to Visit

Spring and autumn are ideal for visiting the region, while summer can be uncomfortably hot and humid.

I had a phenomenal experience visiting the region in winter, with deep snow on the ground in Koyasan. The weather would change surprisingly quickly from snowstorm conditions to amazingly clear blue skies. On the Kumano Kodo, the weather was cool and perfect for hiking, with very few people on the trails.

Nick Kembel is the creator of Spiritual Travels, a website dedicated to mindful travel and destinations in East Asia. He lives in Taiwan with his wife and two kids and you can find him on Facebook and Instagram.