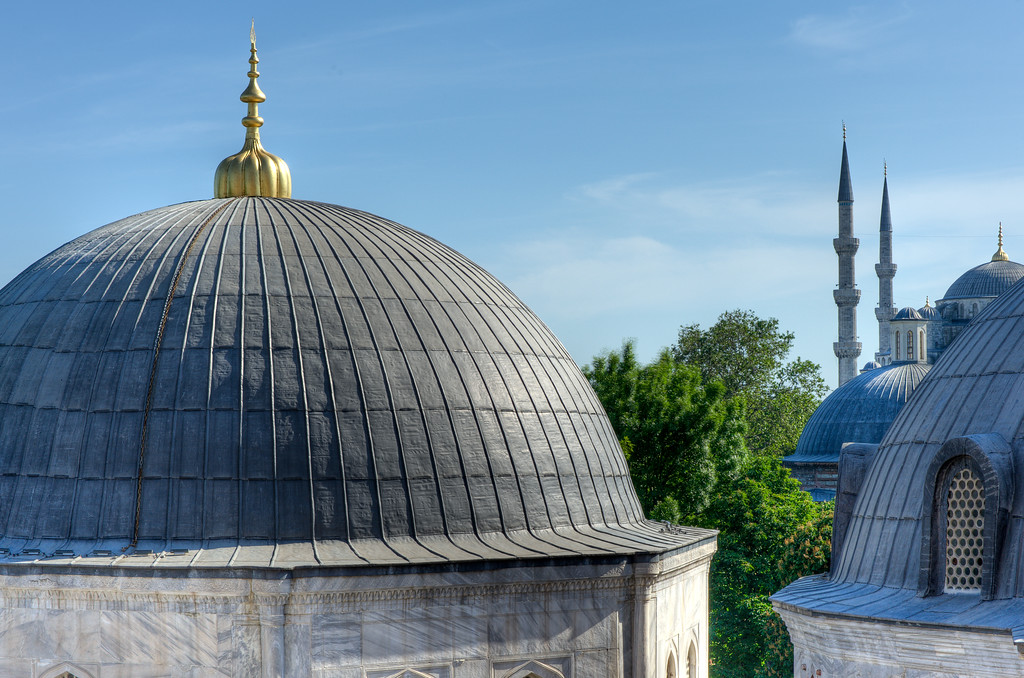 Home to over 15 million Istanbulites, Istanbul may not be Turkey’s capital (that honor belongs to Ankara), but it remains the country’s largest city by quite some margin. Formerly known as Byzantium and Constantinople, the area has long been a major area of trading and commerce thanks to its location and the Bosphorus, the river separating the European side and Anatolia (the Asian side). The border is invisible, of course, and millions of people take an ‘intercontinental’ ferry for pocket change every day.

Officially a secular state without a religion, recent political shifts in Turkey have emphasized more conservative Islamic beliefs. Female tourists will be asked to wear headscarves or cover their hair in some manner at some mosques, while tourists of all types should keep their knees and shoulders covered while in a religious place. Muslim calls to prayer are broadcast five times a day and can create quite a cacophony of sound in some public areas.

While plenty of tourists have a great time here exploring the historic center of Istanbul and numerous UNESCO World Heritage Sites, a number of scams and overpricing schemes are easy to fall for, and many of them are centered around the city’s top things to do and main attractions. The ‘dropped my brush’ shoeshine guy is easily avoided by ignoring their clumsy attempts, while the SIM cards available at the airport may be highly overpriced compared to elsewhere. But even give this, your days spent exploring Istanbul will be rich in culture—here’s a perfect three-day Istanbul itinerary covering centuries of this storied city’s history.

How to Get Around Istanbul

Getting around can be a bit tricky—during our visit to Istanbul in spring 2019, Google Maps was surprisingly unreliable at offering solid sets of directions. (My best advice here is to walk a few meters down the road and see how the options change.) The English name of a place and the Turkish name of a place aren’t necessarily the same place on the map, so defer to the Turkish name as necessary.

The Istanbul Airport you’ll fly into opened in April 2019, with the now-former Ataturk Airport no longer in use by passenger planes. As of publication, the metro lines connecting to the new airport aren’t yet complete—your best bet is to catch the Havaist airport shuttle that goes to Taksim, then connect with the subway or buses to get where you’re staying. Be sure to pick up an Istanbulkart as described below.

Subways, buses, and ferries all use the Istanbulkart, a contactless card like many other systems around the world. Each transfer carries a separate but smaller fare, and you can reload your card at any subway station (be aware these machines don’t give change). The subway is easily the best way to get around the city—it’s far better than the surface buses (which become ensnarled in surface road traffic), and takes you more places than the Metrobus option (which is great for locals, but doesn’t really connect to any of the main touristy things to do).

As a city on the water, a series of intercontinental ferries connect the European side (Avrupa Yakasi in Turkish) to the Asian side (Anadolu Yakasi, but also called the Anatolian side). Ferries are safe, leave on time, and the rides are quite scenic. The current schedules, seen near a terminal’s entrance, are clear enough, and there are electronic sign boards indicating the departure time and the destination of the next few ships. Unless you’re interested in paying a fair bit more for a touristy ride up the Bosphorus, these ferries are an excellent way to cross the river and enjoy the journey along the way.

Things to Do in Istanbul in 3 Days

Istanbul has more sights to see than tourists can enjoy in a month. In the interest of highlighting what’s worthy about the city (I am ‘Worthy Go’ after all!), I’ll forego the well-covered destinations like the Blue Mosque, the Hagia Sophia, and the Grand Bazaar—all part of Istanbul’s UNESCO site. Go if you like, but be aware they’re quite crowded and often more expensive than the same thing a few hundred meters away.

Start Day One with a look at the European side and a bit of history at the Istanbul Railway Museum (Istanbul Demiryolu Müzesi). While small, it’s a reminder the grand Orient Express once connected Europe to this eastern terminus.

The Museum of the History of Science and Technology in Islam (Islam Bilim ve Teknoloji Tarihi Müzesi) is a short walk away and favors reconstruction of scientific machines and achievements over propaganda points.

Next, walk to the home of Turkish Delights (Ali Muhiddin Haci Bekir Lokumlari)—supposedly the birthplace of lokum in 1777—and take in the wide variety of sweets available. Check for yourself, obviously, but in general, the prices are comparable to other shops in the area.

Each of the above stops on your Day One Istanbul itinerary is best thought of as relatively short stops (perhaps 15-20 minutes each, with the Science and Technology museum worth around 30 minutes), and are short walks from one place to the next.

From here, feel free to meander around the Eminönü area before heading east to the Carpet Museum (Hali Müzesi) for another history lesson. Pay attention to a couple of large panels in the second gallery, which talks about the many motifs at play. It’s quite near the Hagia Sophia, but amidst the many entrances and things to see, it’s too easily missed or overlooked. Come back to the Eminönü area at night for drinks, food, and some laid-back atmosphere. Be aware alcohol is heavily taxed, but look for happy hour specials along the way.

Day 2: The European Side

Starting in the Besiktas area, make your way to the Naval Museum (Deniz Müzesi) for a look at the royal ships and boats. Beyond the gilded boats is a fine introduction to the Turkish history of sailing, but personally, the royal ships are the highlight. The Museum of Palace Collections (Saray Koleksiyonlari Müzesi) is a stone’s throw away and is best thought of as an overflow sort of museum of all the royal stuff that doesn’t fit elsewhere. A caged warehouse area is partially open to the public in the back, as if to say “there’s even more here we can’t show you.”

Whether you’re a football (soccer) fan or not, walk on to Besiktas Football Club Museum (Besiktas JK Müzesi), inside the BJK Vodafone Park. Think of the Besiktas Club as the Turkish equivalent of Manchester United—the museum covers a century of the club’s history, alongside some great interactive touches. Head into the soundproof karaoke room to sing some cheers, or cover your ears in another soundproof room to feel the loud intensity of the fans.

Next up on your Istanbul itinerary is a decidedly non-touristy place: The Özdilek Foundation Hall of Fame Wax Sculpture Museum (Özdilek Vakf? Balmumu Heykel Müzesi). Yes, Istanbul also has a Madame Tussauds in the touristy area, but this particular wax museum offers a better glimpse into Turkish arts and culture. This means most of the names will be unfamiliar, but Google is your friend in places like this.

At night, head over to Bomontiada for a classy look at modern Turkish nightlife. The former beer factory has been reimagined as a cultural center to house a variety of offerings. Think of it as an outdoor mall, but with things like an art gallery and a concert hall instead of clothing shops. The Babylon concert venue is the biggest draw for some, but the three restaurants, a co-working studio, and a brewery all make up an impressive set of offerings.

Day 3: The Asian Side

Assuming you haven’t taken a ferry, now’s your chance! From the European-side ports of Besiktas or Eminönü, get to the Kadiköy pier (or the Marmaray train station of the same name) on the Asian side to start the day off with a self-guided street art tour of Istanbul. (Order a tea along the way.)

The street art here is seen on a grand scale—entire sides of buildings are home to enormous murals. You could easily spend the day meandering down side streets to take in the dozens of pieces scattered throughout the area. As always, street art is ephemeral in nature, but a favorite piece of mine is several-story tall ‘UFO Attack’ by Sepex and M-City, at the intersection of Resit Efendi Sk. and Talimhane Street.

Next, take a taxi (use the Bitaksi app to hail one) to the Istanbul Toy Museum (?stanbul Oyuncak Müzesi). The three-story-tall giraffe marks the way, and this kid-friendly museum holds over 4,000 antique toys in rooms carefully themed by a stage designer. Look for a very early Mickey Mouse, a Charlie Chaplin doll with a heartwarming story, and a two-century old violin amongst the toys from around the world.

Your final destination is the Baris Manço Museum (Bar?? Manço Müzesi). Best thought of as an outlandish Turkish rockstar for children, his home was transformed into a museum in the years after his passing. Look for pages of sheet music in the stairways, a summer and winter garden area, a collection of rings he wore, and a lot of his discography.

If you’re looking for a couple more places to round out the day, check out Goblin Oyun Klubu (a board game club) that few if any tourists meander into, or the Moda Park about 700 meters south of the Kadiköy pier. It’s nothing fancy, but after three days exploring all the things to do in a city with this many people, it’s nice to get away from them.

While I wouldn’t classify myself as a ‘foodie’, the Pa?a Döner chain found across the city impressed me. It’s essentially Turkish fast food with a small menu, but it’s fast, hot, and cheap.

Like so many other major cities around the world, Istanbul has plenty to offer. Make the most of your time by grouping places geographically (as I’ve done here), and take plenty of photos!

Chris Backe (rhymes with ‘hockey’) is the travel blogger behind Worthy Go, a digital nomad, a game designer, and an all-around geek. He’s written dozens of guidebooks and itineraries, including the step-by-step guide ‘Becoming a Digital Nomad’, and a 3 Days in Istanbul guide. He has been seen on Atlas Obscura, io9, Mental Floss, and dozens of other sites. 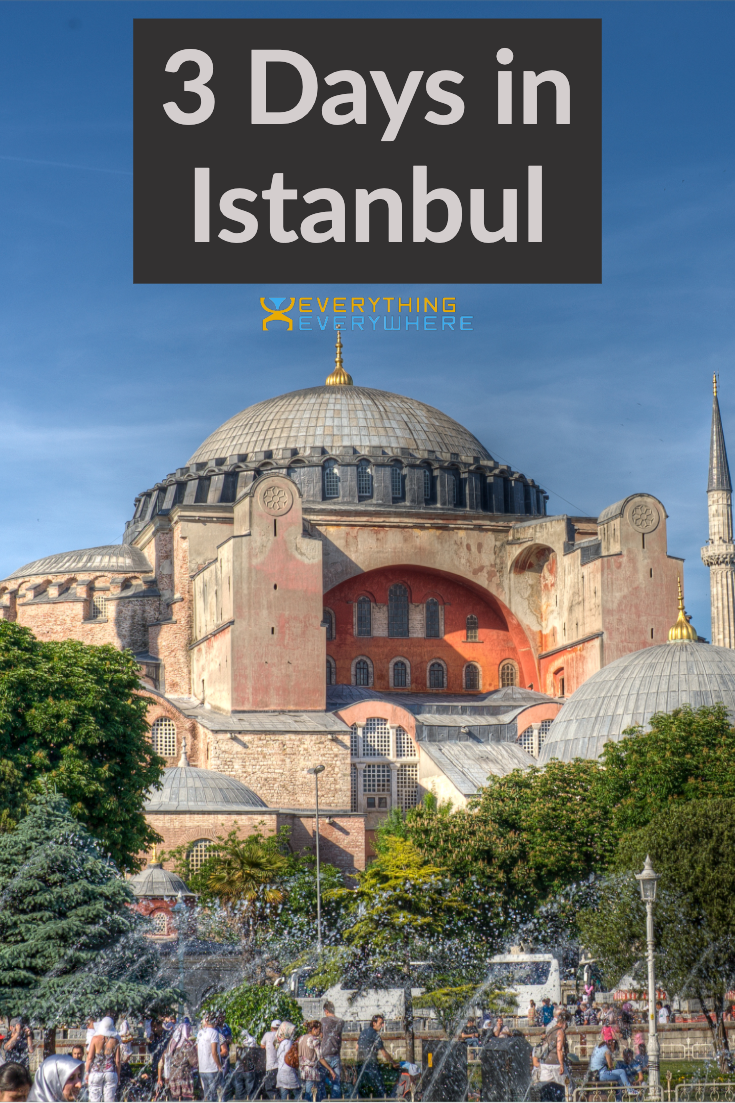