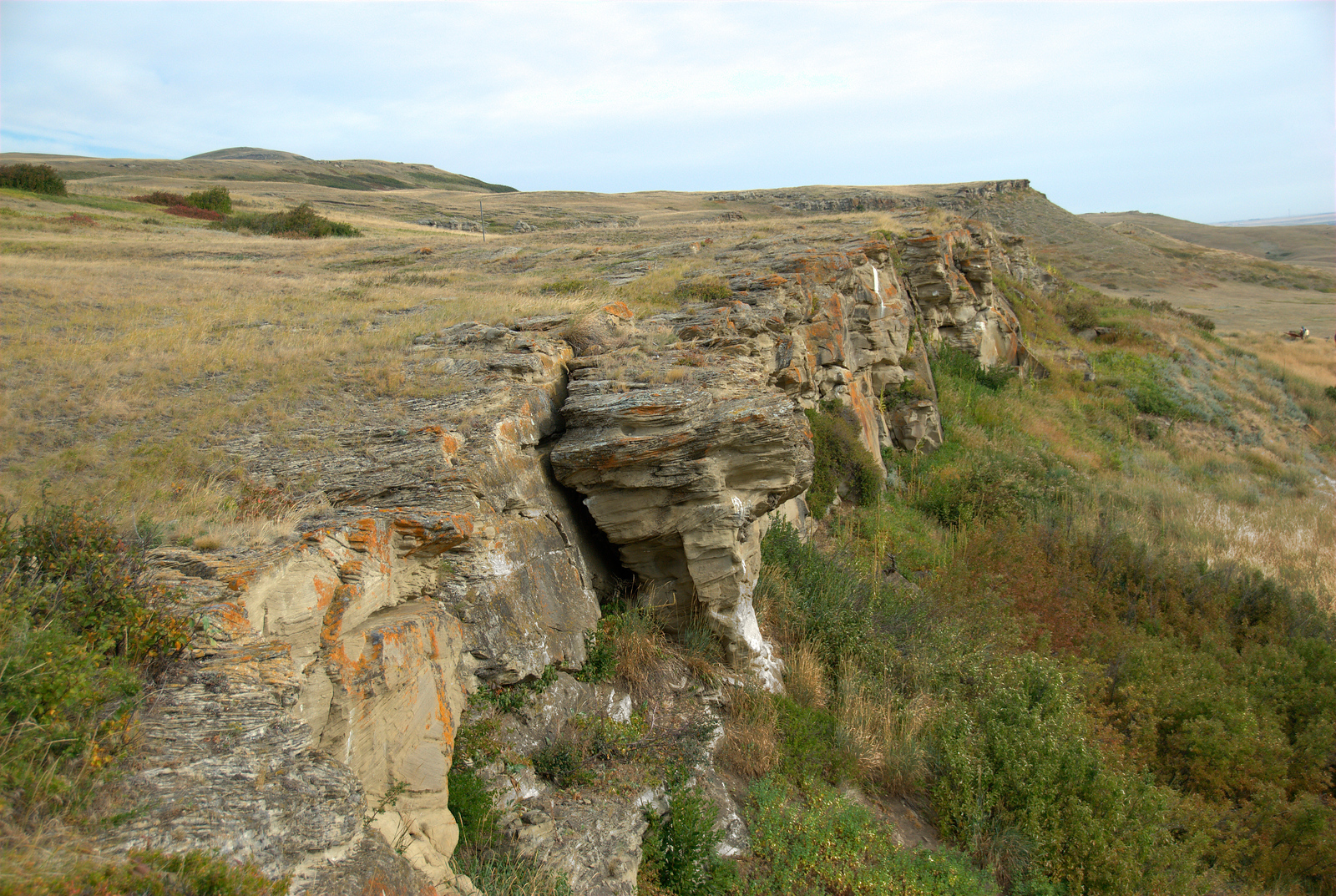 From the World Heritage inscription for Head-Smashed-In Buffalo Jump:

In southwest Alberta, the remains of marked trails and an aboriginal camp, and a tumulus where vast quantities of buffalo (American Bison) skeletons can still be found are evidence of a custom practiced by aboriginal peoples of the North American plains for nearly 6,000 years. Using their excellent knowledge of the topography and of buffalo behavior, they killed their prey by chasing them over a precipice; the carcasses were later carved up in the camp below.

I didn’t know what to expect when I visited this site, but in the end, it was far more interesting than I thought it would be. Most people have an image of Indians on horseback hunting buffalo. Horses, however, weren’t introduced to the Americas until the arrival of the Europeans. Before that, they had to walk everywhere. One of the easiest ways to hunt would be to heard bison into a group and run them off a cliff. Most of the tribe would be waiting below the cliff to skin and process the bison that jumped. It was actually a brilliant and very efficient way of providing food.

The Head-Smashed-In Buffalo Jump is a UNESCO World Heritage Site in Canada located in Alberta. It was inscribed in 1981 while the site was founded in 1955. It is also considered a National Monument and belongs to the list of National Historic Sites in Canada and Alberta’s Provincial Historic Sites list.

This buffalo jump is located at the same spot wherein the foothills of the Rocky Mountains rise from the prairie. The buffalo jump along with the museum of Blackfoot culture in Alberta, Canada comprise the UNESCO property. Joe Crowshoe Sr. was instrumental in the preservation of this site since he has dedicated his life to preserving the Aboriginal culture, as well as the ties between the Aboriginal and non-Aboriginal people.

About the Head-Smashed-In Buffalo Jump

The Head-Smashed-In Buffalo Jump is located where the Rocky Mountains meet the Great Plains in Alberta. It is considered as the oldest, largest and most well-preserved buffalo jump in the world. The site is also a testament to a hunting tradition in Alberta that has existed for more than 6,000 years and can be traced back to the natives that once settled in the area.

Hence, this UNESCO site is considered of important archaeological value. You will also find several remnants of a remarkable history of how the Plains people survived for several millennia. This survival can be attributed to the people and natives’ understanding of the regional topography and behavior of the bison that lived on the land. This enabled them to hunt bison by stampeding them over a cliff.

The history of chasing bison off the cliff is considered to be a 6,000-year-old practice. The researchers who worked on the site were able to scope out archaeological finds over the area covered by the UNESCO site. While the first recorded history of the site was by the Europeans in the 1880s, this site was abandoned by the 19th century following contact with Europeans. The first excavations on this archaeological site were done in 1938 by the American Museum of National History. After the excavations produced evidence of prehistoric life, it was named into the UNESCO World Heritage Sites list.

There are also educational workshops available within the center along with tipi camping. Meanwhile, there are annual events held at the site to commemorate the native festivals and events that are linked to the history and culture of the ancient Aboriginal people that called the site home. The exhibitions are available all year round. Hence, tourists who visit Head-Smashed-In Buffalo Jump are able to witness these exhibitions, which are collaborative works from various museums and historical societies.