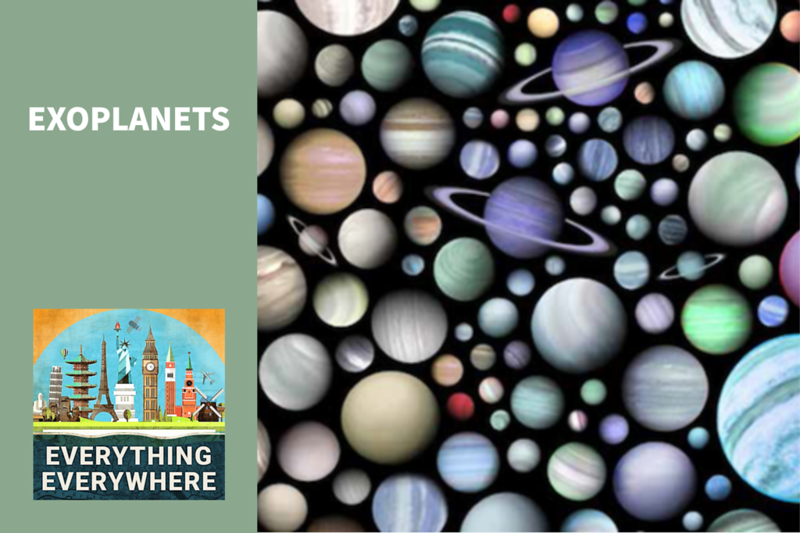 For centuries this remained an unanswerable question. Telescopes and techniques weren’t advanced enough to get an answer one way or another.

Eventually, however, astronomers developed methods to detect if there were planets outside of our solar system, and when they did, they found them everywhere.

Learn more about exoplanets, planets that orbit around other stars, on this episode of Everything Everywhere Daily.

The idea that other stars had planets has been around for a long time. As early as the 16th century, the Italian astronomer Giordano Bruno posited that there might be planets orbiting around other stars. He was also the first person to seriously raise the idea that those other planets might have life just like on Earth.

It was a philosophical point for centuries because no one had a way of detecting if there were planets around other stars.

There were several claims of planets having been found around other stars throughout the late 19th and early 20th centuries, but those claims were never substantiated.

For example, in our solar system, smaller rocky planets are the inner planets. Gas giants are the outer planets.

Imagine an alien encountering a single human being, and from that one example trying to figure out if every human was like that one human. Did we all have four limbs? Did we all have black hair? There is no way to know from a single data point.

One concept that was floated was the idea that there could be what is known as “hot Jupiters”. A hot Jupiter would be a jupiter sized plane, or possibly much larger, that orbits a star from a distance like Mercury.

Why are exoplanets so hard to find?

There are several reasons.

They are so far away that most stars appear to be nothing more than a point of light.

Planets are much smaller than stars, so being able to see them would be at least an order of magnitude harder.

The second problem is light.

Moreover, when a planet is between us and a star, it is reflecting all of its light away from us.

The big problem is that stars are so bright that it makes it hard to see anything around it. If you have ever had a bright light in your face and you had to use your hand to block the light to see something, it is the same effect.

So, if astronomers wanted to find planets outside of our solar system, they were going to have to be clever.

The first extrasolar planet which could be confirmed was discovered in 1992.

It was discovered, not around a normal star, but around a pulsar. Pulsars are incredibly rapidly spinning neutron stars that emit electromagnetic radiation from their poles like a lighthouse would emit light.

Pulsars are incredibly regular. So much so that you could use them to set your clock or to time events.

However, sometimes, it would skip a beat. It turned out that the times it would miss a beat were also very regular and could be predicted.

Two astronomers, Aleksander Wolszczan of Poland and Dale Frail of Canada, calculated that the cause of the skips was that there were two planets orbiting the pulsar that would periodically block the signal.

They had discovered planets outside of our solar system.

In 1994, a third planet was found around the pulsar and today remains the smallest extrasolar object ever discovered. It is only about twice the mass of the moon.

That occurred in 1995 with the discovery of a planet around the star 51 Pegasus.

If you remember back to my episode on tides, I said that technically, the moon doesn’t revolve around the Earth. What is happening is that the Earth and the Moon are both rotating around the center of mass of the Earth-Moon system.

The same is true for a star with a very large planet. As they are both rotating around the center of mass of their system, the star will have a very slight wobble. That means it will move slightly towards us and away from us as the planets revolve around it.

This is the doppler effect and it is that same thing that happens when you hear a car with a siren approach you, and then move away. The pitch of the siren will increase as it approaches, pushing the sound waves together, and then the pitch will decrease as it goes away as the soundwaves get further apart.

Both Mayor and Queloz were awarded the Nobel Prize in Physics for their work in the discovery of exoplanets in 2019.

The planet, which was named 51 Pegasus B has an orbital period of only 101.5 hours and a mass of about 46% that of Jupiter. It is extremely close to its star.

Once 51 Pegasus B was discovered and independently confirmed, it opened up the floodgates for other astronomers.

Once they knew there was something to actually look for and that the techniques worked, they began looking, and they began developing new techniques for finding these planets.

Another technique that was developed was the transit method. The transit method is really simple. As a planet passes in front of a star, the light we receive from that star will dim ever so slightly. Again, even though it is small, astronomers are able to detect very small changes in light.

The first planet detected with this method was OGLE-TR-56 b located in the constellation Sagittarius. This too is a hot Jupiter with a mass of 1.3 Jupiters and a year for this planet is only 29 days.

There was a flood of extrasolar planets that were discovered, and the discoveries have never stopped.

In addition to the wobble and transit method, a host of other techniques were developed as well. These include gravitational lensing, detecting reflected light, and even direct observation.

In 2008 the Hubble Space Telescope found the first exoplanet by direct observation. The planet Formalhaut B, around the star Formalhaut about 25 lightyears away, was discovered after analyzing images taken of the star over a period of years and seeing a spec of light move.

Since then, there has been debate as to what Formalhaut B actually is. Some think that it just might be part of a dust cloud around the star or some other object that might be passing through the Formalhaut system.

As more and more exoplanets were discovered, the tools to discover them improved as well. A big jump in our ability to discover exoplanets occurred with the launch of the Kepler space telescope in 2009.

Kepler was a huge leap in our ability to discover extrasolar planets. It basically had one job. Monitor the light coming from over 150,000 stars to detect exoplanets using the transit method.

Kepler had a nine-year run before it was retired in 2018, but during that time it was responsible for the discovery of 2,662 new exoplanets and over 5,000 candidate exoplanets that need to be confirmed.

The next big advancement will be the James Webb Space Telescope. I previously did an episode on the Webb Telescope just before it was launched. Since then, the mission has gone almost flawlessly and they will soon be releasing its first images.

One of the primary missions of the Webb Telescope is to find exoplanets.

In the 30 years since the exoplanet bonanza started, as of March 2022, there have now been over 5,000 exoplanets that have been confirmed and thousands more candidate planets that still need to be verified.

If you remember back to my episode on the Drake Equation, one of the variables in the original Drake Equation for determining the odds of intelligent life, was the percentage of stars that had planets.

While most of the Drake Equation variables are still complete unknowns, this one appears to be something close to 100%. Stars, where planets haven’t been observed, might just have planets in orbits that are hard to see, or the planets might be too small or far away.

Most of the techniques that are currently used and the equipment that currently exists will tend to find the largest planets which are closest to their stars.

There have been discoveries of exoplanets that have totally changed our understanding of how planets form and what type of solar systems can exist.

The Kepler 11 system has five different planets within the orbital distance of Mercury. It has been dubbed a compact solar system.

Kepler-186f was the first rocky planet discovered within a star’s habitable zone.

That brings us to the really big question. Can we find an exoplanet which is like Earth?

A rocky planet of similar mass that is within the habitable zone of a star and has an atmosphere of water or oxygen.

One planet, Gliese 581d is known as a super-Earth, meaning it is rocky and much larger than Earth, but it is within the habitable zone.

Four planets have been found orbiting the star TRAPPIST-1 within its habitable zone.

Finding an Earth-type planet will require larger and better telescopes than what we currently have.  The current methods and equipment we are using to discover exoplanets can’t easily find a planet as small as Earth.

With new techniques being developed and new telescopes coming online, expect to see more and more exoplanet discoveries announced over the next few months and years.

If we do manage to find an Earth-like planet, it might change everything. It would be too far away to visit with our current technology, but even knowing that one such place exists where life could be supported, would have the potential to change our view of the universe and our place in it.

I have a whole bunch of boosts to acknowledge today. Boostagram activity has really picked up this last week and I want to thank everyone who has pitched in.

If you have no clue what these boostagrams are I keep talking about, I have links to two articles in the show notes which will help answer your questions and to get you up and running if you want to participate.

I first have to give a big shoutout to Petar who it seems has been going through the back catalog and has been doing automated 1000 sat boosts for every show, plus a few other on top of that.

By my count, he has done 51 boosts of 1,000 sats each using the Fountain Podcast App on iOS.

Dave Jones sent a 2112 sat boost using the Castomatic app and then sent his first weekly automated boost of 12112 sats.

Every time a boost comes in, I have a chime that goes off on my computer and it always bring me joy. Sometimes, it even wakes me up if I’m sleeping.