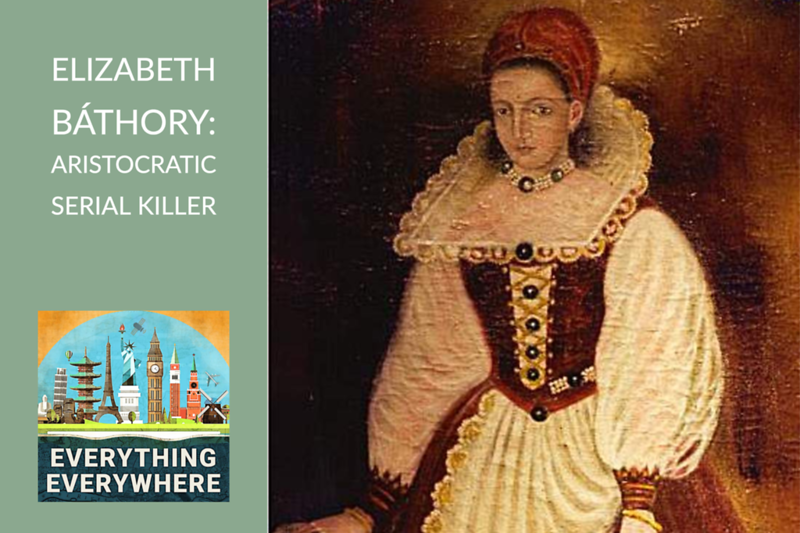 The Countess Elizabeth Báthory de Ecsed was a Hungarian noblewoman in the late 16th and early 17th centuries.

She was highly educated, spoke at least four languages, had eight children, and lived in a palace.

And, oh, by the way, she was one of the most prolific and sadistic serial killers in world history.

Learn more about Elizabeth Báthory, aka the Countess of Blood, on this Episode of Everything Everywhere Daily.

I always try to keep this podcast clean, or as I like to say, as clean as history will allow.

This episode is one of those episodes where the details of history can get quite gory. So, if you are eating or you have children listening, be forewarned.

Elizabeth Báthory was born in 1560 in the town of Nyírbátor in Hungary, in what was at that time the Holy Roman Empire. She was born to a noble family.

Her father was Baron George VI Báthory. From her mother’s side of the family, she was related to the King of Poland, the Grand Duke of Lithuania, and the Prince of Transylvania.

Outside of her genealogy, much of her early life remains in the realm of legend and stories.

Supposedly she suffered seizures when she was younger and might have had epilepsy.

She was highly educated for a woman of that period. In addition to speaking Hungarian, she could speak Latin, Greek, and German.

So to summarize her position, she was rich, educated, and of high social rank. She had everything that someone in the late 16th century could possibly hope for. I don’t want you to think that her life was perfect, but given the circumstances of the period, she was at the very top of the pyramid.

Later biographers posited that she witnessed horrible events take place when she grew up. She might have seen instances of torture and executions take place, although there is no evidence of this happening. It is all speculation.

We do know that she became pregnant at the age of 13 and had an illegitimate child, the father being a local peasant boy. The child was given to a local family and raised apart from Elizabeth.

She was engaged the same year at the age of 13 and was married when she was 15 to Count Ferenc Nádasdy, in what was a purely political marriage. She was married in 1575.

Her wedding gift was the Castle of Csejte, which is located today in Slovakia near the Czech border. Along with the castle were 17 neighboring villages.

She was the brains of her family. Her husband, by all accounts, wasn’t that smart and was barely literate.

He was given the responsibility for all Hungarian troops in a war with the Ottoman empire, which meant he was usually gone, leaving Elizabeth to manage affairs herself back home.

He was supposedly a sadist himself with rumors of him torturing Ottoman soldiers including setting them on fire while alive.

There were also rumors that her husband had the peasant boy who got her pregnant at the age of 13 torn apart by dogs.

So far, everything I’ve mentioned about Elizabeth Báthory is not that much different from that of thousands of other noble women centuries ago.

What made her different began sometime around 1590. It is unknown when it began or who her first victims were. However, at some point, young girls, usually between the ages of 10 to 14, were brought to her castle.

Many of her first victims were poor peasants. They were enticed to come to the castle to work as maids or servants.

However, she soon worked her way up to the daughters of the landed gentry. These would have been the people above the peasant class but below the nobility.

The girls would have been sent to the castle to learn the rules of etiquette from the Countess.

Slowly, these girls began disappearing. They were being held in a torture chamber inside the castle and tortured for the Countesses amusement.

The scope of the torture and abuse seeming knew no bounds.

There were reports of her putting needles under the fingernails of her prisoners. She would use hot objects ranging from coins and keys to hot irons, to burn their bodies. They would be thrust into freezing cold water.

There were reports of girls being covered in honey and then being subject to ants and bees.

This was on top of just the plain old beatings. There were reports that she bit the victims. In at least one case, the breast of one of the girls was cut off, and she was then forced to cook it and eat it.

While she was responsible for most of the tortures and murders, she reportedly would also engage in it with her husband when he was around.

The stories became even more macabre. She supposedly would drink or bathe in the blood of virgins that she killed, as they thought it preserved her youth, or possibly was a treatment for her epilepsy.

This went on for years. She used four servants as accomplices in her crimes.

Rumors, however, began to spread and bodies began to appear.

The problem was given the political system at the time, the nobility in an area they controlled had almost complete immunity from anything they did. They were the law and the only way something could be done is if someone went over their head to the Emperor

Count Nádasdy died in 1604. Without his protection, rumors and accusations against Elizabeth began to spread. In particular, one Lutheran minister named István Magyari began making public accusations against her in public, and in the court of the Emperor in Vienna.

It wasn’t until 1610, almost 20 years after her killing and torture spree started, that the Holy Roman Emperor Mathias II began an investigation.

In December 1610, they had enough evidence to make an arrest. On December 30th they arrived at the castle and according to legend, she was caught in the act. The body of several dead girls was found and another was in the process of being tortured.

Supposedly she was found covered in blood, but that is thought to be a later embellishment of the story.

In the end, her accomplices were all tortured, confessed, and then executed.

Elizabeth Báthory herself was basically just confined to her castle for the rest of her life. Despite her heinous crimes, her punishment was just house arrest. Supposedly, she was walled up into a single room, but there were many accounts of her having free reign of the entire castle grounds.

She died in 1614 at the age of 54. Supposedly she was buried in a nearby cemetery, but the local people objected to having her buried there, and she was moved to her family crypt in Ecsed, Hungary. Today the location of her tomb is unknown.

During the investigation, it was reported that she had killed between 600 to 650 girls. Even contemporary experts on the subject who think that number is too high put the number of victims at no less than 80. Supposedly there was a diary found that documented all the victims, but that has never been found by historians.

Today she is listed by the Guinness Book of World Records as the greatest female serial killer in history.

There was another layer to this story beyond just the murders, however. The Emperor was Catholic and Elizabeth Báthory was Protestant.

The Báthory family was rich with extensive landholdings and the Emperor was in debt to them. If he could confiscate all of this land and wealth as a punishment, he would get richer and have his debts wiped away.

There are a few contemporary researchers who think the entire affair was nothing more than a conspiracy against Elizabeth Báthory. It was just an imperial plot to confiscate her land and holdings.

The problem is that there is just too much evidence, including the evidence found on the premises during the arrest. Also, her first public accuser wasn’t Catholic, but Protestant. Furthermore, in the end, most of her land and holdings were in fact given to her children after her death.

In the 400 years since her death, Elizabeth Báthory has spawned countless legends and her story has been used in parts in many works of fiction.

She has actually appeared as a character in many vampire novels.

There is an entire Wikipedia page devoted to her references in popular culture. There are dozens and dozens of books, movies, comics, and television shows about her, or that were inspired by her.

Many subsequent authors who have written about the historical Elizabeth Báthory have had a hard time dealing with the concept of a female serial killer. There aren’t many of them, let alone one who was so prolific.

The consensus of most modern criminal psychologists is that she was simply a sadistic psychopath who used her position, power, and wealth to indulge in her desires.

It was the power given to her by her aristocratic title which allowed her to conduct her reign of terror unabated, killing hundreds of young girls, for over 20 years.

Today’s review comes from listener la.emperatriz over at Podchase. They write:

Great podcast!  Gary always makes the topics interesting and the show has become my go-to every morning while eating breakfast.  Such a fantastic way to start the day!

Thanks, la.emperatriz. I have to apologize for today’s episode. It might not have been the best companion for eating breakfast.

Remember, if you leave a review over at Podchaser until the end of April, they will make a donation to help feed Ukrainian refugees, which will be matched by several other podcast companies.