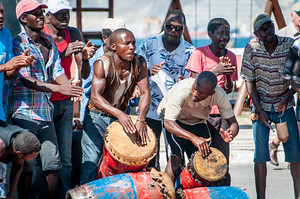 I wasn’t sure what to expect in Angola.

Angola has a horrible reputation amongst travelers. It is one of the most difficult and expensive countries in the world for which to get a visa. Simple, non-luxury hotel rooms can run $500/night. Meals and other services for travelers are similarly outrageously priced. Basically, Angola doesn’t seem want tourists and is quite happy if visitors stay away.

Prior to our arrival in Lobito, I wasn’t expecting much in the way of a tourism infrastructure. In addition to everything I said above about Angola, Lobito and the nearby city of Benguela aren’t even close to being the top attractions in the country.

I was right. Lobito isn’t a major tourist attraction, but that turned out not to be a bad thing. It was refreshing to visit a place where the people you saw on the street were genuinely as interested in you as you were in them.

We began our day be taking a train from Lobito to Benguela. It was an antique train, which was interesting, because the train wasn’t a collection of refurbished cars, but rather an actual train from the 1930’s which appeared to simply never have been upgraded. All the fixtures, light bulbs and seats on the train were the originals installed over 70 years ago.

Along the route we passed some of the best and worst of the region. Almost all of the train stations were brand new, but completely empty. It is as if they were built just to have train stations, not because they needed new train stations. The ticket booths had no furniture or equipment inside. There were no signs and nothing to indicate that people actually used the stations.

We also passed many shanty dwellings and people who lived near the railroad tracks. As the train passed many children ran out to wave at the train, which gave me the impression that it wasn’t a common occurrence, or at least the antique train wasn’t.

The poverty was extreme, but it didn’t seem crushing. I didn’t spend enough time in Angola to really offer any knowledgeable opinions about the subject, but it seemed obvious that there is a massive disparity in the country and that the oil money which was being generated wasn’t being used to everyone’s benefit.

In the short time we were there, we also saw significant evidence of Chinese involvement in the economy of Angola. We saw several crews of men repairing train tracks and everyone one was lead by a Chinese foreman. There were large work yards we passed for Chinese construction companies and there were trucks and other evidence of Chinese firms at every construction project.

The train arrived in Benguela, which is a city of about 600,000 people. We got the quickie tour of the city by bus, which didn’t really impress. The city reminded me of many other large cities in developing countries which I have visited: Phnom Phen, San Jose, Maputo, and Saigon.

After brief stops at a Catholic church and the beach, we drove back to Lobito for lunch while another group who were taken to Benguela by bus took the train back.

The highlight of the day came after lunch where local dancers and capoeira practitioners performed for us. The day was pretty boring from a photography standpoint up until we met the dancers. They put on a great performance which was enhanced by the fact that this wan’t something they regularly didn’t for tourists (because they don’t get very many).

I came away from my brief Angola visit thinking how much potential there is for tourism in this large country, and how if the government were to just relax their visa policies, they could dramatically increase their number of visitors. They have a long coast, untouched beaches and an area twice the size of Texas.

Angola is on my list of places I’d love to return to and explore more. If and when the government ever liberalizes their visa policies, I’d gladly go back.