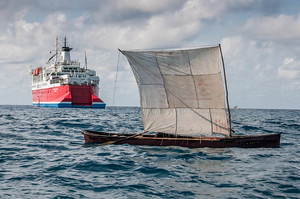 On day 12, the G Expedition pulled into the tiny island of Sao Tome.

I’ve spoken previously about the poor conditions and lack of a tourist infrastructure we found in Angola and Congo. On paper, Sao Tome is poorer than either of those two countries (primarily because of a lack of oil) and because of its location in the middle of the Atlantic, it probably get significantly fewer visitors as well.

Nonetheless, Sao Tome turned out to one of the highlights of the trip so far.

For those of you who don’t know about the nation of Sao Tome and Principe, it is a tiny former Portuguese colony in the Gulf of Guinea. The area is approximately 1/3 the size of the state of Rhode Island and the population is about 157,000 people. It is either the smallest or second smallest country in Africa, depending of if you include the Seychelles as African.

Unlike the rest of the stops on this trip, we were unable to dock in Sao Tome because they didn’t have a deep enough port or the facilities to handle the boat. We had to shuttle everyone from the ship to the shore via inflatable zodiacs. I think that sort puts into perspective just how small of a country this is, as the Expedition isn’t that large of a ship.

The first thing I noticed when we arrived were the flotilla of small fishing craft off the shore. What made them unique was that they were all carved from a single tree and all used bags of rice sewn together for a sail. They are small, ingenious, low-cost craft which sustain the fishing industry on the island. (see photo above)

Our first stop of the day was a coffee plantation on the island (Monte Cafe), but on the way we stopped at a waterfall and drove through some smaller villages on the way there. It was hard to put my finger on it, but while the people in Sao Tome are poor, life on the island seemed easier than what we saw in Congo or Angola. In fact, Sao Tome hardly seemed like it was in Africa. It could just as easily been an island in the Caribbean or the Pacific.

Once we arrived at Monte Cafe, we were swarmed by the local children who also go to school there. We were told that the coffee plantation only gets visitors once every 3-4 months, so it was a different experience for them. I can always tell how visited a place is by the reaction in the children. In over touristed spots, the kids have learned to beg and ask for things. In places like Monte Cafe, which gets few visitors, the kids are entertained by the novelty of having different people around.

After the plantation visit, we then headed back to the city of Sao Tome (capital of the country) for lunch. Along the way we stopped to see some local dancers who were performing. Supposedly the dance came over from the Congo from when the Portuguese transported slaves to the island. It was never really explained what the dance meant or its purpose, so I was left scratching my head about what I had just seen. 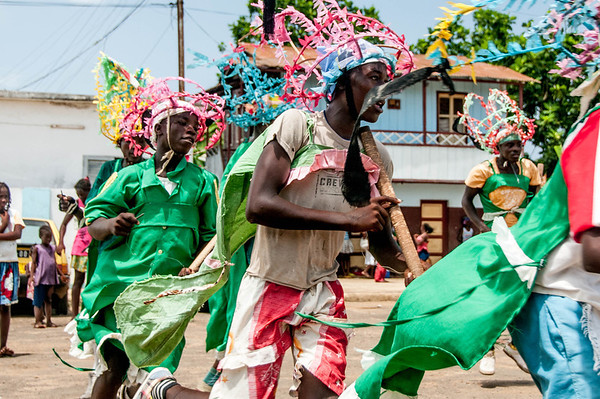 After lunch at a restaurant on the beach, we did a tour of the city which was hit all the usual spots you see on a city tour: the cathedral, independence square, a colonial fort and the presidential palace that we were told not to take pictures of. The condition of the public monuments seemed to be better in Sao Tome than in Angola or Congo. In many developing contries, monuments are erected to celebrate independnence or some leader and soon fall into a state of disrepair. While there was some of that, they at least cut the grass and trimmed the shrubs.

The summary from my brief visit to Sao Tome is that is a very un-African, African country. Because it is an island it is perhaps shielded from many of the problems on the continent. (For example, the rate of HIV infection in Sao Tome is only 1-2%, where in some African countries it can reach 20% or higher.) Oil exploration is underway which could bring more money to the country, but will probably also bring a whole other set of problems.

I’d love to return to Sao Tome sometime in the future to spend more time. It is a facinating little country which has a lot to offer.

Next Stop: The Island of Principe