Earlier this year I was invited by Tourism Valencia to attend a blogger trip at this year’s Formula 1 Grand Prix of Europe. Despite not being a huge race fan, I jumped at the chance to attend. Why? Because even though I don’t care to watch cars go around and around chasing each other every week, I do think the spectacle surrounding auto racing is fascinating. These are multimillion dollar machines which are the pinnacle of automotive engineering. Changes as small as a flexible spoiler can mean the difference between a half second in a race which can mean the difference between winning and losing.

As an American, I never hear much about Formula 1. Growing up it was always about the Indy 500 and later NASCAR became popular. Since I started traveling, however, I’ve come across F1 everywhere. Several times during my travels I’ve just missed F1 races in the cities I’ve visited. Melbourne, Monaco and Kuala Lumpur all had races just after or before I arrived. Having seen the tracks in some of the cities I knew it was something I wanted to experience first hand.

In Valencia, I got my chance. 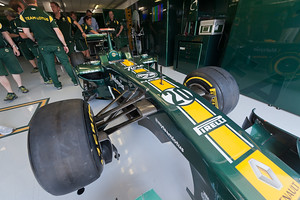 One of the benefits of having a popular blog is that I will often get behind the scenes access to things. At the Grand Prix of Europe we were allowed to visit the paddock area several days before the race. In particular we got access to the paddock and garage of Team Lotus. Team Lotus name has a long history in F1, but the current incarnation of the team is relatively new. From what I was told our access was actually the result of another travel blogger, Keith Jenkins, who’s family knows people at the company who sponsor the team: Air Asia.

The first thing that struck me when I saw the paddock area was the enormity of the entire operation. The average F1 race will consist of 12 teams, each with two cars. Each team travels with a staff of dozens of people with perhaps over 100 more back in their headquarters. This entourage will include drivers, mechanics, composite fiber specialists, cooks, media handlers and everything else required to keep a such a large team functioning. Each team also has one or more luxurious trailers for the team to eat and relax in, as well as another trailer(s) for the cars, equipment and gear.

As impressive as all that sounds, what makes it REALLY impressive is the people and equipment are transported around the world on a weekly basis. Formula 1 races are currently held on every continent except Africa and there is seldom a week off. That means every week thousand of people and tens of thousands of tons of equipment are flown between locations at a cost I don’t even want to think about.

In the garage area we saw the dozens of tires which are available for each car. Tires for rain and tires for heat. All the tires are actually heated before they are placed on a car to get them ready for the extreme temperature they will experience.

Despite all the rules for each and every component of a race car, there are still some things which each team does to give themselves a competitive advantage. We were asked not to take photos of some things in the garage because the information might be used by competing teams. 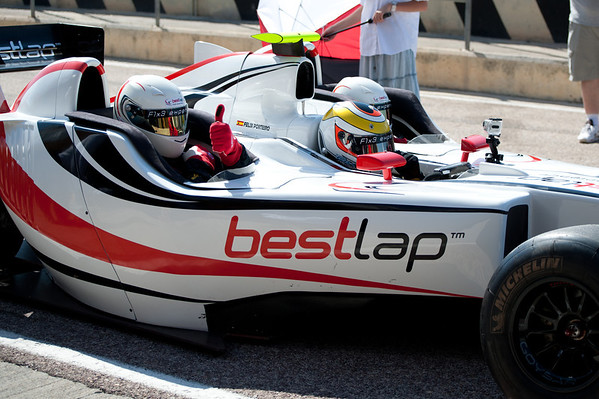 As cool as visiting the paddock was, it was nothing compared to the next F1 experience we had lined up: riding in an honest to goodness F1 car.

The experience was done through Best Lap, a Spanish company that lets people experience a ride in a F1 car. While the body of the car is modified to seat passengers, everything else comes from an actual F1 car. In fact, the car I rode in won the Brazil Grand Prix in 2003. The cars are designed so that two passengers can sit between the wheels. Other than that, the cars are pretty much the same as they were when they were driven in competition. 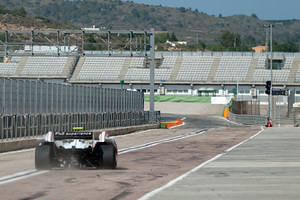 To ride in the car you have to wear safety gear similar to F1 drivers. That includes a fire suit, helmet, boots, gloves, and head covering under your helmet.

The seat is similar to the size and position the driver of the car has, but without the steering wheel, obviously. One thing I did get from this was a greater appreciation of what it takes to be a F1 driver. The clothes and conditions in the car are very hot. There is no air conditioning and you are basically sitting on top of a engine with winter clothes on. There isn’t a whole lot of room in the cockpit either. I’m bigger than most F1 drivers and it was a very snug fit for me.

You are also not sitting upright. The seat is positioned such that you are almost lying down. I likened it to a moving coffin.

The difference between a F1 and say a high end sports car isn’t necessarily the top speeds you hit. It is possible for a high end Mercedes to go as fast as a F1 car on a straightaway. The difference is in the acceleration. You can go from zero to 60mpg (100kph) in under 2 seconds. The power to weight ratio of these cars is what really sets them apart.

The moment the car takes off you can feel the acceleration. Next to being on a rocket or a roller coaster is it one of the fastest accelerations you’ll ever experience. You are pushed back into your seat.

One of the big ways in which an F1 car is different from your car is that there are no windshields. That means when you hit top speeds the wind is smashing right into your face. On the straightaway you are hitting a top speed of 300kmp (186mph) and your helmet feels like it wants to come off of your head.

Race day was much like attending any sporting event with a few major exceptions. For starter it is extremely loud. EXTREMELY LOUD. If you don’t wear ear plugs during the entirety of the race you’ll find it terribly painful and might suffer hearing loss. It was far louder than any concert I’ve ever attended.

Even though our seats were relatively good ones and we could see the starting line, there wasn’t a whole lot to see. No matter where your seats are, you can only see a small fraction of the track. Every minute there would be a pack of cars zipping around a corner and a few seconds later they would be gone. You had no idea what was happening, who was winning or if there was any drama whatsoever in the race.

Being there live let you experience the sounds and feeling of a race, but it was hard to capture the competition that was going on. Many of the hardcore race fans I saw had small televisions or radios along so they could follow all the action.

Most of the crowd were wearing Ferrari gear because their main driver, Fernando Alonso, is from Spain. He came into the race ranked 3rd and took 2nd place in the Grand Prix. I had absolutely no idea who had won or that the race was even over until they displayed the results on one of the big monitors.

Attending the Grand Prix was a great experience. Even if you aren’t a hard core race fan it is still worth attending a race if you have the chance. The experience and spectacle of race day is worth it.

The European Grand Prix is scheduled to be in Valencia until 2014, and it is widely considered to have one of the best tracks in the F1 circuit.