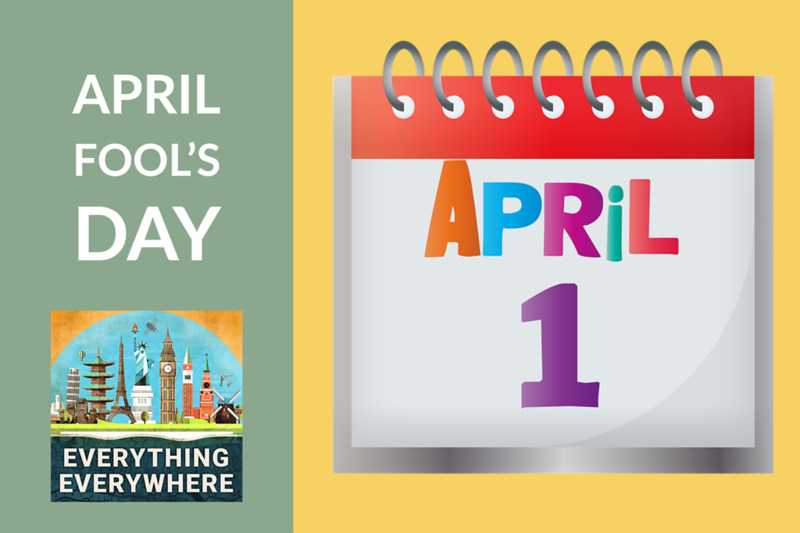 Every day on April 1st, you have to be careful what you read and hear. This day, known to accounts as the beginning of the second quarter, is known to most people as April Fool’s Day.

Why do we have a day where we try to trick people, and why does that day occur on April 1st?

Learn more about April Fool’s Day on this episode of Everything Everywhere Daily.

The idea of a day where people would play pranks on each other goes back to antiquity, which is a theme you should now be familiar with on this show.

However, the association with April 1st as that day of mischief is pretty much shrouded in mystery. We really don’t know where the tradition came from. There were several things that were historically similar that happened around the same time of the year and that is the best bet as to where it originated.

The Romans had a festival known as Hilaria which took place on March 25. Make note of this date, because it is going to come up again.

As the name might suggest, Hilaria in Latin means “the cheerful ones” and is the root word for the English words “hilarious” and “hilarity”.

The feast was a celebration of the goddess Cybele, who in Rome was also known as Magna Mater or “Great Mother”.

We don’t know a lot about the festival, but we do know that people wore masquerades, and they could mock whoever they liked without repercussions on this day.

Another possible origin for April Fool’s Day has to do with the change in the calendar.

If you recall from my previous episode on why we celebrate New Year’s Day on January 1, many countries used to celebrate the start of the year on March 25.

The week-long new year celebrations would end on, you guess it, April 1.

The theory holds that after they changed the calendar in 1582 in France, they made fun of people who still celebrated the new year on March 25 by making fun of them on the last day of the festival, April 1.

However, there were mentions of things happening on April 1 before the calendar change, so it is highly unlikely that that was the thing that was the origin of April Fool’s Day.

In 1508 a French poet made reference to “poisson d’avril” or April’s Fish.

April Fish day was similar to April Fool’s Day, except you’d try to pin a paper fish on someone’s back, and playing jokes on gullible people who would be hooked like a fish. If you played a joke on someone, you’d put a fish somewhere in the joke to signal the fact that it was a joke.

By the late 17th century, playing pranks on April 1st was firmly established.

In London, people were sent to The Tower of London to see the “washing of the lions” ceremony….which was something that didn’t exist.

In Scotland, it was known as Huntigowk Day which comes from the phrase “’Hunt the Gowk”. A gowk is basically a cuckoo or a snipe.

You’d send someone on an errand to deliver a sealed message to someone. When the recipient read the message it would say “Dinna laugh, dinna smile. Hunt the gowk another mile.“. The person would then send the deliverer of the message to deliver yet another one, and the next person would do the same, as long as they could continue the ruse.

There has been a long history of famous April Fool’s Jokes.  The longest-running source of these has probably been the BBC.

Perhaps the most famous was a 1957 segment of the BBC news magazine Panorama. They did a story from Italy about the spaghetti harvest. They shot footage of people picking spaghetti off of trees. 1957 was a bumper crop because they had eradicated the spaghetti weevil.

The BBC had dozens of calls with people asking how they could grow their own spaghetti trees.

In 1980, the BBC World Service reported that the clock on Big Ben was going to be changed to a digital display and that the first four callers would win the hands of Big Ben after they were retired.

In 2008 the BBC reported a newly discovered colony of flying penguins. They even got Monty Python member Terry Jones to film it documentary style, and follow the penguin’s migration to the Amazon Rainforest.

The BBC doesn’t have a monopoly on jokes, however.

In 1978, the people of Sydney, Australia woke up to see an iceberg in Sydney Harbor. An entrepreneur named Dick Smith claimed to have towed it from Antarctica. In reality, it was just a barge covered in white plastic and foam.

In 1985, Sports Illustrated ran a story on a baseball prodigy called Sid Finch. He could throw a baseball 168 miles per hour, which was something he learned from Buddhist monks in the Himalayas. He would also wear a single boot while playing.

In 1996, Taco Bell took out full-page ads in major newspapers around the United States to announce that they had purchased the Liberty Bell and they were renaming it the Taco Liberty Bell.

In 1998, Burger King announced the left-handed Whopper. The ingredients were the same as the right-handed Whopper, but everything was rotated 180 degrees.