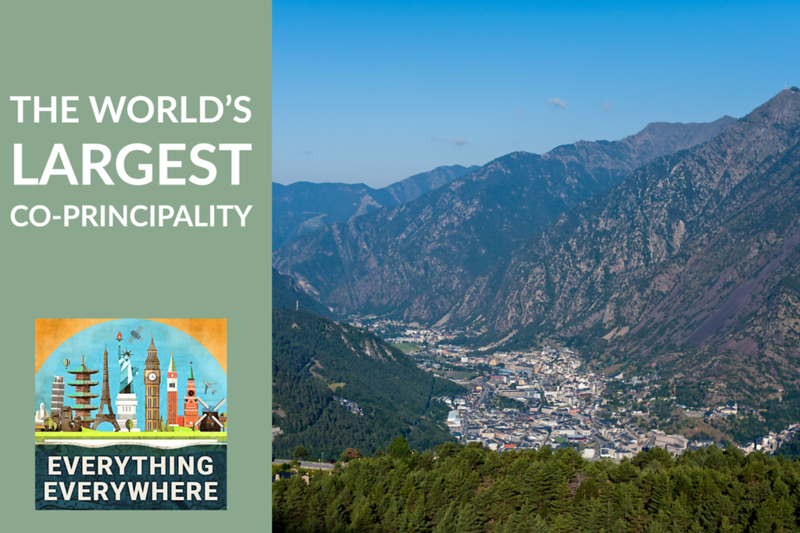 Learn more about the nation of Andorra, the world’s largest co-principality, on this episode of Everything Everywhere Daily.

Scottevest is always innovating. That is why they recently announced their newest product, the Scottemask.

You’ve probably seen people wearing neck gaiters that they pull up over their mouth and nose to use as a mask. Those are certainly better than nothing, but they aren’t the best when it comes to actually, you know, being a mask.

The Scottemask gives you the best of both worlds. It can be worn around your neck and pulled up over your mouth and nose like a neck gaiter, but it also has a pocket for a removable mask filter, a drawstring to close it around your head, and an adjustable nose bridge. In true Scottevest tradition, it also has some small pockets to keep things like extra cash, or a credit card.

You can get 15% off the Scottemask by going to Scottevest.com and using coupon code “EverythingEverywhere”, all one word, at checkout

So, let  me start by addressing the question that many of you are asking, what in the world is a co-principality?

A co-principality is a land that is ruled by two princes equally.

Andorra, if you haven’t been there or if you don’t know much about it, is a tiny country in the Pyrenees mountains, sandwiched between France and Spain.

Europe used to be full of these tiny principalities, dutchies, and baronets. Over time, they all got rolled up into the larger countries that we are familiar with today.

But a couple of them remain. Countries like San Marino, Monaco, Liechtenstein, Luxembourg, and Andorra are remnants of this European past.

So the question is, how did these tiny countries, which have all the things that other larger countries have including Olympic teams, embassies, and United Nations representation, come to exist in the modern world?

I’ll eventually deal with the other tiny countries in other episodes, but for this episode, I want to focus on the world’s only co-principality, Andorra.

When trying to figure out why this country exists, in the case of Andorra, you have to first look at its location.

Andorra traces its history back to Emperor Charlemagne who created a series of buffer states between the Holy Roman Empire and the Islamic Moors in the Iberian Peninsula. Tradition says that Charlemagne gave a charter to the people of Andorra in exchange for fighting the Moors, and that was the origin of the country we see today.

Its location in the mountains protected it against invaders. Not only was it difficult to get to, but it wouldn’t yield many rewards for any invader’s efforts. So even though it is sandwiched between two much larger countries, unlike a country like let’s say Poland which has been repeatedly invaded by its neighbors over its history, Andorra has been relatively conflict-free.

The other thing which has protected Andorra is its unique co-principality status. This institution dates back to the 11th century. One of Charlemagne’s descendants bequeathed Andorra to the Bishop of the Dioceses Urgell in Spain. Later on, one of the Bishops placed himself under a Catalonian nobleman for protection, and his lands later became under the control of the Count of Foix in France.

This lead to a conflict between the Bishop of Urgell and the Foix about who should control Andorra. The compromise was something called a parage, which was a medieval contract where two lords would agree to share control over a territory.

Even though they didn’t realize it at the time, creating joint sovereigns offered a great deal of protection for the tiny country.  One of the princes, the Bishop of Urgell,  was in Spain, and the other was from France. Neither had an incentive for the other side to get a leg up on the other.

Moreover, one of the princes was secular and one was from the church, which also provided another balance and check.

Today, one of the co-heads of state is still the Bishop of Urgell. The other head of state, which was originally the Count of Foix, eventually got merged into the French Republic. Today, that position is held by the President of France.

That leads to the weird situation where both of Andorra’s heads of state are determined by other countries. One is appointed by the pope in Vatican City, and the other is selected by the people of France.

During the French Revolution, the French government actually refused the annual tribute which Andorra gave them, saying it smacked too much of serfdom. After Napoleon took over, he accepted his position as co-prince as Andorra begged him to do so to put a check on Spain.

During the Spanish Civil War, there were French troops in Andorra, just to counter any possible annexation by either side in Spain.

In one historical quirk, Andorra joined the side of the Allies in World War I. However, when the Treaty of Versailles was signed ending the war, they totally forgot to invite Andorra. As a result, Andorra was legally at war with Germany and the First World War didn’t technically end until the two countries signed a peace treaty in 1958.

Today, the co-princes are mostly ceremonial, but you will find their photos hanging on the wall in government buildings. The President of France is really too busy being the President of France to worry about tiny Andorra. The Bishop of Urgell will sometimes pay visits to Andorra and fulfill his role as head of state as the Cathedral of Urgel is only about 2 hours away by car.

In 1993, Andorra became a parliamentary democracy, still keeping the co-princes as heads of state. They joined the UN in 1993 and have also signed treaties with the European Union. They are not members of the EU, nor are they technically members of the Schengen Zone, but they also have no official visa policy. Likewise, they are not officially part of the Euro Zone, but they do use the Euro as its currency.

I actually stopped in and watched the Andorra Parliament in action when I was there. They seemed to have no problem with me observing, even though I had no clue what was going on.

Spain and France will check some vehicles going in and out for goods purchased in Andorra, but usually, you can drive in without so much as stopping.

Speaking of Barcelona, Andorra is the only country in the world that has Catalan as its only official language.

Andorra was historically a very poor region due to its location high in the mountains. However, after WWII Andorra’s fortunes changed dramatically. Tourism and banking became major industries given its ski resorts in the mountains and its legal status as a tax haven.

Today its population of about 80,000 people has the 25th highest per capita GDP in the world, and according to some reports, they have the world’s highest life expectancy.

So, if you are ever in the region, take some time to pop into Andorra. You can easily visit on a day trip if you are in Barcelona and it can be reached if you have a rental car or if you take a bus. You can see first hand what life is like in the world’s largest co-principality.