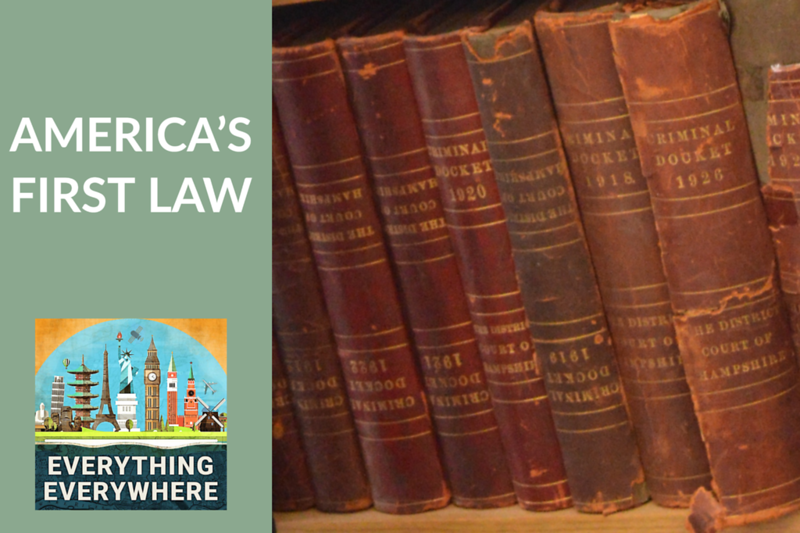 Let’s say you have a brand new country. You want to take it out of a spin and make some new laws. What is the first thing you do? Maybe ratify a treaty? Perhaps something about the economy.

Well, if you were the United States back in 1789, you didn’t do anything nearly that exciting.

Learn more about the very first law in the United States on this episode of Everything Everywhere Daily.

My audiobook recommendation today is The First Congress: How James Madison, George Washington, and a Group of Extraordinary Men Invented the Government by Fergus M. Bordewich.

The First Congress was the most important in US history because it established how our government would actually function. Had it failed – as many at the time feared it would – it’s possible that the United States as we know it would not exist today.

During two years of often fierce political struggle, they passed the first 10 amendments to the Constitution; they resolved bitter regional rivalries to choose the site of the new national capital; they set in place the procedure for admitting new states to the union; and much more.

If you’ve ever started a business, there was probably a stage you went through early on where you got letterhead, business cards, and maybe some office supplies.

None of that really has anything to do with what your business actually does, but it’s all part of the infrastructure of doing business. It’s overhead, but it’s a necessary overhead.

When the first congress convened on April 1, 1789, they had a whole bunch of this housekeeping that they had to take care of.

They had never met before. As institutions, they had no rules or traditions. They had to elect leaders like a speaker of the house. They had to figure out how they should address themselves.

So, if you were thinking that the first order of business of the very first congress was tackling some important issue facing the new country, you’d be wrong. The first issue for Congress was just being congress.

When the House of Representatives finally had a quorum on April 1, 1789, they met at Federal Hall in New York City, which was the first capital of the United States. You can visit Federal Hall today which is right on Wall Street, just a few hundred feet away from the New York Stock Exchange.

On April 6, the Senate had their quorum and met in the same building. One of the senate’s first orders of business was counting the electoral college votes for president, which they did on day one. This was a constitutional requirement that was necessary to get the executive branch up and running.

Compared to today, the first congress was really simple.

There were no political parties. They would come soon enough, but with the very first congress everyone was still figuring out what was what, and there weren’t yet issues to coalesce around. However, of the 65 members in the house, 37 would be considered Federalists and supporters of Washington, and 28 would be considered Ant-Federalists, and in the opposition.

There wasn’t much in the way of committees at this point either. The Senate, which only had 26 members, didn’t have any committees. Everything was debated by the entire body.

In the house, they only had three standing committees:

They also hired employees to help run each body.

On April 7, the day after the Senate met for the first time and read the electoral college results, they hired a doorkeeper whose job was to keep people out while the Senate was engaged in private deliberations. They hired James Mathers who held the post until his death in 1811.

The next day, April 8, they hired Samuel Otis as the first secretary of the Senate, a position which he held until 1814.

The House likewise hired a clerk, a sergeant at arms, and a doorkeeper.

The Senate and the house also created a set of working rules for how they would work together to get legislation passed.

Almost everything which was done in the first month of the first congress was mostly passing resolutions which only affected congress itself. These weren’t actual laws that had to be passed by both houses and signed by the president. These were just internal housekeeping measures.

John Adams was obsessed with how the president should be addressed. He headed a committee which considered “Your Highness”, “Your Electoral Highness”, and even “Your Majesty”.  Thomas Jefferson called the idea of addressing the president as your majesty as  “the most superlatively ridiculous thing I ever heard of” and Benjamin Franklin said it was “absolutely mad”.  Washington eventually stepped in and said, “Just use Mister President”, and that is what we have done every since.

As all these things were going on, a committee of representatives was working on language for a bill on the oath that members of Congress would take. On April 25, they brought the bill who the whole body which approved it on the 27th.

The bill then went to the Senate who expanded it to require all government officials at the state and federal level to also take the same oath.

When sent back to the house, they had no objections to the Senate changes, so it was passed and sent to the president for his signature.

On June 1, 1789, George Washington affixed his signature and America had its first official law: An act to regulate the time and manner of administering certain oaths.

Here is the actual text of America’s first law:

Sec. 1. Be it enacted by the Senate and [House of] Representatives of the United States of America in Congress assembled, That the oath or affirmation required by the sixth article of the Constitution of the United States, shall be administered in the form following, to wit: “I, A. B. do solemnly swear or affirm (as the case may be) that I will support the Constitution of the United States.” The said oath or affirmation shall be administered within three days after the passing of this act, by any one member of the Senate, to the President of the Senate, and by him to all the members and to the secretary; and by the Speaker of the House of Representatives, to all the members who have not taken a similar oath, by virtue of a particular resolution of the said House, and to the clerk: and in case of the absence of any member from the service of either House, at the time prescribed for taking the said oath or affirmation, the same shall be administered to such member, when he shall appear to take his seat.

There’s more to it which I’m not going to read which basically applies the oath to other people in the government.

Believe it or not, sections of this law are still in effect, 231 years later. There were major revisions to the oath during the Civil War, but other parts of the law regarding who and when the oath must be applied are still on the books today.