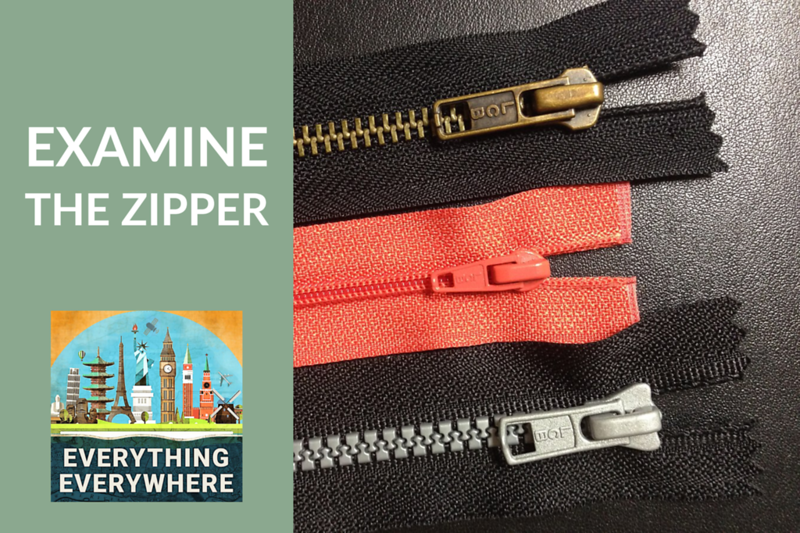 I’m guessing that almost everyone listening to this podcast has, within the last 24 hours used a zipper.

They are ubiquitous at this point and most people have never given them much thought. Yet, its invention was a rather inspired leap of creativity and required the development of several other technologies before it could even become a thing.

Learn more about the zipper, how it was invented and how it is used today, on this episode of Everything Everywhere Daily.

I’ve told you before about how Scottevest has lots of pockets to help you carry all of your gear, and that’s true. It is what they are best known for.

However, they have many clothing innovations beyond just pockets.

Their patented Technology Enabled Clothing or TEC includes conduits in their clothes which allows for a personal area network of hidden cables throughout their garments, which are designed for routing charging cords from pocket to pocket, or headphones up to the collar for easy access.

I’ve been wearing Scottevest clothing for years and I still wear their stuff every day.

You can get 15% off your next order by going to Scottevest.com and using coupon code “EverythingEverywhere”, all one word, at checkout. Once again that is Scottevest.com.

The zipper is an odd invention in that it really didn’t solve a problem per se. It is a fastening device, and we already had fastening devices for clothing before the invention of the zipper. Buttons, hooks, and ribbons all did the same thing that zippers do.

Moreover, the zipper really couldn’t have been invented any earlier than it was. As you’ll soon see, an ancient Chinese or Roman zipper really wasn’t something that could have happened given the state of technology at the time.

The very first attempt at creating something close to a zipper was invented by American Elias Howe in 1851. Howe is better known for the inventor of the lockstitch sewing machine, which was the precursor to the modern sewing machine.

His patent was for an “Automatic, Continuous Clothing Closure”. It was the first real attempt at what we would call a zipper. However, Howe’s sewing machines were so successful that he never bothered to pursue his clothing closure patent.  He died a multi-millionaire but isn’t credited with being the father of the zipper.

His invention didn’t have teeth and was probably closer to something like the seal on a zip-loc bag than it was a modern zipper.

The person credited with inventing the zipper is Whitcomb Judson.

Like Howe, Judson had many other patents. However, unlike Howe, none of his other inventions really made him any money.

Judson called his device the “clasp locker” and it used a hook and eye system, which was different from the modern zipper which uses interlocking teeth, with a guide that would interlock the two sides.

He applied for the patent in 1891 and its original intent was to be used with boots and shoes. He also noted in the patent application that it could be used for “generally wherever it is desired to detachably connect a pair of adjacent flexible parts.”

Even before his patent was approved, he submitted another patent which was far closer to what we know as a zipper.

His description of his device as he put in the patent was as follows:

… each link of each chain is provided both with a male and female coupling part, and when the chains are coupled together the female part of each link on one chain is engaged by the male part of a link on the other chain.

Pretty close to the modern zipper.

In 1893 Judson created the Universal Fastener Company in Chicago which was the first company dedicated to the production of zippers.

Except they weren’t yet called zippers.

Before I said that the ancient Chinese and Romans couldn’t have developed the zipper. The reason had to do with manufacturing techniques.

Zippers require very precisely manufactured parts that are identical. The techniques required to mass-produce such parts just didn’t exist until the 19th century. To produce a zipper before these techniques were developed would have required a master clockmaker or a metalsmith, and even then they would have had to have crafted every piece.

Judson’s fastener was given many awards, but it never really caught on during his lifetime.

The Universal Fastener Company eventually moved to New Jersey, and then to Meadville, Pennsylvania where they changed their name to the Talon Company. More on them in a bit.

If Whitcomb Judson was the father of the zipper, a Talon employee by the name of Gideon Sundback really refined the product. He increased the number of teeth per inch, improved the locking mechanism, created a better machine for producing teeth, and also personally got the license to create the device outside of the United States.

The word zipper finally entered the lexicon in 1923. The rubber company B.F. Goodrich introduced a pair of rubber boots with the name “zipper”. The name was originally used for the brand of boot, but the word became associated with the fastening mechanism.

In the 1920s, zippers still weren’t widely used. Their primary use was on shoes and tobacco pouches.

It wasn’t until 1925 that a zipper was first used on a jacket.

Zipper usage on clothing didn’t really take off until 1937 when French fashion designers discovered the zipper and began using it on the fly of men’s pants.

Levi’s didn’t come out with their first pair of blue jeans with a zipper until 1947.

Zippers are not and have never been something that clothing manufacturers have created themselves. It is a metallic product that requires specialized machinery. Third-party manufactures have always specialized in zippers ever since the Universal Fastener Company was created.

That company, which eventually became the Talon company, was by far the largest zipper manufacturer until the 1960s. 70% of zippers used in the US were manufactured by Talon.

However, like many market leaders, they were lazy and sloppy. They had high prices and didn’t innovate. Moreover, as the textile industry began moving overseas, Talon kept focusing on the US market.

The company which took over their market dominance is one whose initials you might have seen on your zippers: YKK.

They also opened manufacturing facilities around the world, including the United States. When NASA needed zippers for their spacesuits for the Apollo program, they went with the Japanese YKK rather than the American Talon Corporation.

By the 1970s, they were making a superior product to Talon at a cheaper price.

YKK grew to be the global leader in zippers by the 1980s and today Talon’s percentage of the global market is in the low single digits.

Today the threat to YKK is primarily coming from China. There are a bunch of very small companies which are competing with YKK on price. Many of them have names like YQQ or YCC, to try and leech off the YKK brand.

Today you can find zippers in a dizzying array of sizes, colors, and materials. They are in almost everything which requires joining cloth or flexible materials.

In 2017, the above-mentioned Talon Corporation created the world’s longest zipper which was 3.1 miles long.

There are still innovations being made in the world of zippers. Under Armor developed a zipper where the two sides at the bottom are joined by a magnet making it easier to zip up a jacket using only one hand.

The zipper is an incredible invention that is simple and ubiquitous. You can appreciate how such a simple device is a wonder of engineering the next time you examine your zipper.

The Associate Producer of Everything Everywhere Daily is Thor Thomson.

I just want to give a big thanks to everyone who has subscribed and has been supporting the show.

I’ve now done over 300 episodes and sometime in the next few days, I’ll be celebrating half a million downloads since I launched the show.

If you know someone who is a curious person and loves to learn, then please share the show with them. We all know such people who might work in your office, or maybe someone you are in touch with online.