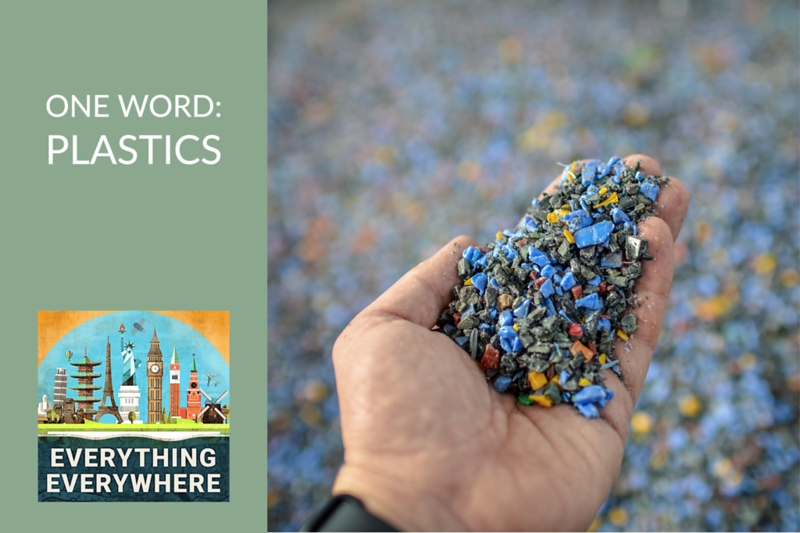 At the 1862 London International Exhibition, an inventor by the name of Andrew Parkes introduced a new product based on cellulose that he called Parkesine.

Little did he know that this material which could be made elastic when heated and molded into almost any shape imaginable would be the basis for an enormous percentage of the materials in common use in the 21st century.

Learn more about plastics, how they were invented and how they are used in the modern world, on this episode of Everything Everywhere Daily.

Plastic is nothing more than a synthetic substance whose main ingredients are polymers. Polymers are very long molecules that consist of the same subunit over and over, and in the case of plastics, they are almost always carbon-based organic molecules.

There are some substances that are natural plastics. In particular, the sap from rubber trees, which is used to make natural rubber.

In fact, the origin of plastics can be directly tied to natural rubber. In 1839, American ??Charles Goodyear developed a process called vulcanization which could harden natural rubber which made it much more useful for many products.

The Goodyear Tire company was named after him, but it was not founded by him. It was founded almost 40 years after this death.

This chemical experimentation with natural rubber eventually lead to what is considered the birth of the modern plastics industry: Parkesine.

Andrew Parke created a substance that was developed from cellulose, which is commonly found in plants and is what makes up most paper.  His Parkesine is a type of plastic known as Celluloid

Celluloid is created from Nitrocellulose which is made by combining nitric acid, sulfuric acid, and cellulose.

Parke’s material won a medal at the 1862 London International Exhibition, however, he was never able to convert his invention into a viable company, and he went out of business in 1868.

The plastic ball was picked up by an American inventor named John Wesley Hyatt.

He responded to a challenge by the billiard ball company Phelan & Collander who offered a $10,000 prize for anyone who could come up with a substitute for ivory in the manufacturing of billiard balls.

Even as early as 1868 ivory was in short supply due to a shortage of elephants.

Hyatt experimented with several substances until eventually coming up with a substance he called celluloid. Very similar to the substance Andrew Parke several years before.

There is no record of him ever collecting the prize, but he did start the Albany Billiard Ball Company, which specialized in plastic billiard balls.

With this, he expanded into the creation of false teeth, piano keys, and most importantly, film.

He also patented the first system for injection molding of plastics in 1878, even though that wouldn’t become commonplace for another 50 years.

Here I should also note that celluloid is extremely flammable. It can self-combust when heated to temperatures over 150°C or about 300°F. This became a big problem when reels of celluloid film had to be run in front of very hot bulbs for motion pictures.

Celluloid was the basis for most plastics for the next several decades. It was almost single-handedly responsible for the dramatic reduction in the use of natural materials from animals such as ivory and tortoiseshell.

Table tennis balls were made out of celluloid up until 2014.

The cellulose used in celluloid came from organic materials such as cotton, and celluloid still had the problem of being extremely flammable.

The next big plastic innovation, which addressed many of the problems with celluloid, came with the development of Bakelite, the full chemical name of which is Poly-oxy-benzyl-methyl-en-glycol-anhydride.

It was the first fully synthetic plastic and it was developed by Belgian-American chemist Leo Baekeland. Baekeland, by the way, was the person who first used the term “plastic” as a noun. Before that, it was an adjective.

Baekeland was looking for a replacement for natural shellac. Shellac is a resin that comes from the lac bug which is found in south and southeast Asia. As with ivory, the source of shellac made the supply very limited.

Bakelite was an electoral insulator and unlike celluloid, wasn’t highly flammable.

Baekeland established the General Bakelite Company in 1910 and licensed the patent to other companies outside of the United States.

One of the first uses for Bakelite was in early electronics. If you’ve ever seen a photo or an old movie where there is a classic black telephone on a desk, that was made out of Bakelite.

It eventually found its way into pieces for board games, gun handles, and kitchenware. If you ever find a plastic object that is from before World War II, there is a very good chance that it is made out of Bakelite.

Bakelite and celluloid were far from the only plastics before the second world war. Many other polymers were developed that fall under the umbrella of plastics that you might not think of as plastics.

Cellophane was invented around the same time as Bakelite by the Swiss chemist Jacques Brandenberger. Like celluloid, it is also made from cellulose and it still is produced today for some packaging items and for tape.

In 1933 polyethylene was developed in England. It was actually considered a state secret because it was lightweight and used for insulating cable on airplanes.

Polyethylene is the most common plastic which is manufactured today, and globally there are over 100 million tons of polyethylene resin produced every year.

In the 1930s, polystyrene began to be produced at an industrial level. It was actually discovered from natural sources almost 100 years earlier

The DuPont corporation released a synthetic substitute for silk in 1939 known as nylon. Nylon was first sold as the bristles in toothbrushes, but it became a massive hit when used for women’s stockings in the 1940s.

It would take me forever to go through every type of plastic, but plastics innovation continued after the war. Other plastics and polymers were invented and manufactured including polyester in the 1950s, and polysulfone and kevlar in the 1960s.

Plastics are so ubiquitous today, that we almost never think about them, let alone the different types of plastic that can be used with different properties. Today, you can buy plastics wholesale in the form of tiny pellets. These pellets can then be melted and injection-molded to make pretty much anything you want.

I’ve talked about many different technologies on this podcast and I’ve made the claim that the modern world couldn’t exist without them. I think that is especially true in the case of plastics.

There is a good chance that your clothing and shoes are also based on plastic.

Plastics have done a lot of good and are extremely useful. They have, more than anything else, eliminated the demand for goods like ivory which were threatening certain animal species.

However, plastics do certainly have their downside. As we consume more and more plastics, this downside is becoming more and more apparent.

One of the biggest downsides to most plastics is that they don’t degrade naturally.

A paper bag or a cardboard box will naturally decompose in anywhere from a couple of weeks to a couple of months depending on conditions and the material.

Most plastics, however, will take over 400 years to decompose.

On top of that, most plastics float.

This has resulted in an enormous amount of plastic that is now floating out in the ocean.  In the middle of the Pacific ocean is a spot known as the Great Pacific garbage patch, which is almost entirely plastic.

It is believed that the garbage patch has been there since the 1940s, but it has been increasing 10-fold every decade since 1945.

I’ve personally seen beaches all over the world which were just covered in plastic trash which washed up on shore after being disposed of thousands of miles away.

Believe it or not, 90% of the plastic waste in the ocean comes from just 10 rivers. Eight in Asia, and 2 in Africa. The Yangtze; Indus; Yellow; Hai He; Ganges; Pearl; Amur; Mekong, Nile, and Niger Rivers.

All 10 of these rivers have high populations living on them, with very poor sanitation systems as well.

There are a host of solutions for cleaning up the garbage patch, but that is probably worth its own episode at some point in the future.

If you think the solution is more recycling of plastics, I have some bad news for you.

Plastics are one of the least recycled products. If you put something plastic into a recycling bin, statistically speaking, based on global recycling rates, only about 20% of it will be recycled. 55% of it will be dumped in a landfill, and the rest of it will be incinerated.

The problem with plastic recycling is that all plastics are different. Even plastics that are in theory the same type, have different additives and dyes. That makes the end product not very desirable to most manufacturers and recycled plastic is often more expensive than new plastic.

The good news is that there are some technologies on the horizon that might solve this problem. In particular, microbes and enzymes that can quickly digest plastics down to their component parts. One experimental enzyme can break down plastic bottles in as little as six hours, and the resulting materials can be used as base materials for making brand new plastics.

One of the other big problems with plastics is microplastics.

This hasn’t gotten as much attention simply because researchers are just discovering how pervasive this is.

Microplastics are defined as any piece of plastic smaller than 5 millimeters. However, we are now finding bits of plastic that are much smaller can be classified as nanoplastics, which are under 1 micrometer in size.

So far, these have been found…EVERYWHERE. By everywhere, I do mean everywhere.

They have been found in Antarctica, rainwater, human blood, and soils on every continent. A recent study I just saw last week found it in samples of human lung tissue.  The particles are so small that they can be carried long distances by wind and rain. They are also so small that they can cross cell walls and effect the functioning of cells.

Some estimates show the amount of microplastics in the ocean to be as much as 30% of the macroplastics we can see floating with our eyes.

This is a pretty new field of research, so there is a lot we don’t know about the impacts of micro and nano plastics yet.

Most micro and nano plastics are believed to come from tires, clothing, and footwear. The wear from car tires is believed to be the largest source of microplastics by a wide margin. Microplastics from clothing largely come from the erosion of synthetic materials during the washing process.

There are also products that include microbeads of plastic as an abrasive agent. They are normally found in soap, body and face wash products, and toothpaste.

Some countries have already banned the use of plastic microbeads and more are likely to do so soon.

Plastics are a double edge sword.

They have indeed made the modern world possible and have improved the living conditions for billions of people, allowing clothing and other items to be manufactured affordably.

On the other hand, plastics in the ocean and microplastics that are…well, everywhere, are also major issues that still have to be addressed.

Either way, much of the advancement in material science in the last century and a half can be boiled down to just one word: plastics.