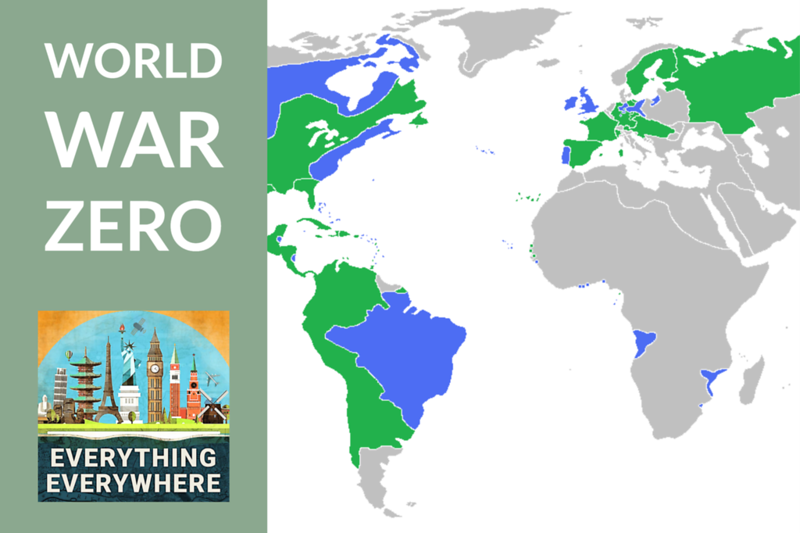 However, despite the names we’ve given them, they weren’t the only world wars. There was another global war that occurred well before the 20th-century wars. This war actually saw conflicts on five different continents.

This episode is sponsored by SurfShark VPN.

For those of you who don’t know, VPN stands for Virtual Private Network.

It allows you to surf the web through an encrypted connection through another computer….and that computer can be anywhere.

If you don’t use a VPN, you need to do so for a host of reasons.

SurfShark works on your desktop, laptop, or on your smartphone.

Enter promo code EverythingEverywhere, all one word, to get 83% off and 3 extra months free!

Before we get into what global conflict predated the world wars, we should talk about where the term “world war” came from.

The term was first used generically in the 19th century. The Oxford English Dictionary claims that the first use of the phrase in English came from a Scottish newspaper called The People’s Journal, in 1848, which wrote,  “A war among the great powers is now necessarily a world-war.”

After that, the phrase appeared in a rather general sense several times, including usage by Karl Marx.

The 20th-century popularization of the phrase came from a German novelist by the name of August Wilhelm Otto Niemann who wrote a book called, Der Weltkrieg: Deutsche Träume. Weltkrieg is German for “world war”. By the way, the title of the book when translated into English was The Coming Conquest of England.

In English, the term world war wasn’t really used until after the conclusion of the war. It was simply known as “The Great War” during its duration.

From the end of World War I through the 1920s and 1930s, there was talk of a Second World War, much like how people referenced World War Three after World War II.

In the ??June 12, 1939 edition of Time Magazine, they ran an article which for the first time called the previous Great War, World War I, and also named the upcoming war, World War II.

On September 4, 1939, after France and the UK declared war on Germany, a Danish newspaper explicitly said on their front page “The Second World War broke out yesterday at 11 a.m.”

During World War I, most of the fighting took place in Europe on the western and eastern fronts. However, there were also battles in the Middle East with the Ottoman Empire, as well as fighting all over Africa between French and British colonies and German colonies in southern, eastern, and western Africa.

There were also some small skirmishes fought in Asia and the Pacific, in particular over the German colony of Samoa, and their Chinese port of Tsingtao.

I’m sure most of you are very familiar with the global nature of the second world war, with extensive conflicts in Europe and Asia, as well as the North African Theater, the Pacific Theater, and small incidents in Northern Australia.

So, basically, the numbering of world wars began in the 20th century, and it was used in reference to modern, mechanized, large-scale wars.

However, if we look at the geographic scope of conflicts, they weren’t at all the first world wars, ie global wars.

European countries have fought each other for centuries alternating between enemies and allies.

When they began their rush to colonize the rest of the world, their conflicts went with them. Many times, there would be skirmishes on the other side of the world that didn’t have any centralized coordination, because communications took too long.

However, there was one conflict in particular which was a sustained war, which ended up being fought on five continents, lasted several years, involved many different countries, and is what some historians have called world war zero.

This was the Seven Years War.

I should note that World War Zero is just a numbering convention to indicate that it came before World War I, and a recognition that we aren’t going to rename World War I and II.

It is sort of like Isaac Asimov’s Three Laws of Robotics. He created them, and then realized a more important fourth law, which he then dubbed the zeroeth law of robotics.

The Seven Years War, unlike other world wars, didn’t start in Europe. It actually started in the backwaters of North America in the 18th century.

The starting point of this conflict took place on May 28th, 1754 in what is today the State of Pennsylvania. It was there that a military force from the British Virginia Colony and a group of Iroquois Indians ambushed a group of French soldiers who were trying to establish a presence in what was called the Ohio Country.

The French had previously chased away a British force that was trying to establish a foothold in what is today the city of Pittsburgh.

The small British/Iroquois force had instructions just to chase away the French. However, they ended up in a skirmish with French forces where one British soldier was killed and as many as a dozen French soldiers.

This became known as the Battle of Jumonville Glen, named after the French commander who was killed.

The entire battle lasted about 15 minutes and there were about 40 men on the British side and 35 on the French side.

Before he became the father of his country, he inadvertently started a global war. Something which is often overlooked in the histories.

The reason why this small battle was significant in that the British and the French were technically at peace at this time.

This began a war that most Americans know as the French and Indian War. However, this war wasn’t really a war per se. It ended up just being the North American theater in a much larger war.

For years the British and French clashed, with each side garnering the support of various Indian tribes, who were likewise using the British and the French to advance their own agendas against the tribes they were feuding with.

Two years after the war broke out in North America, the war between Britain and France escalated when it spread to Europe.

Prussia, led by Frederick the Great, attacked the smaller state of Saxony, which then triggered a whole bunch of alliances, which was very reminiscent of other world wars.

Sweden, Russia, and Spain joined in on the side of France, while Portugal and some smaller German states joined Prussia and Britain, including Hannover, who, if you remember, was where the British royal family came from.

In the Caribbean, the British ended up taking Havana and a large part of the island of Cuba, as well as some other minor islands in the region.

In South America, Portugal and Spain fought over regions of the Amazon which bordered their respective colonies.

In India, the declining Mughul Empire allied with the French to combat the British who were expanding their presence in the subcontinent.

In Africa, the British invaded and took over the French colony of Senegal, including the main trading base of Goree Island.

The British also occupied the main Spanish port in Asia, Manila in the Philippines.

In the Mediterranean, the French took the British-controlled island of Menorca.

Russia, which fought the Prussians and was fearful of their domination of Europe, ended up switching sides in 1762 when Tsarina Elizabeth died and was replaced by her nephew, Tsar Peter III.

Even without getting into all of the various battles on mainland Europe, you can clearly see that this was a truly global conflict. Almost all of the major powers in Europe were involved, and war took place literally around the world.

The war went on, as the name would suggest, for seven years and eventually ended in 1763.

So what was the result of seven years of global fighting?

Yes, the Louisiana Territory was Spanish and the French later sold it to the United States after buying it from the Spanish and holding it for a single day.

The Spanish wanted Havana and Cuba back, so they gave it to the British in exchange for Spanish Florida and Manila…both of which ended up back in Spanish control anyhow.

France ceded the Caribbean islands of St. Vincent, Tobago, Dominica, and Grenada to the British.

Portugal solidified its claim to much of what is today the northern and western parts of the Brazilian Amazon.

Britain took over the entire Bengal from the Moghul Empire.

In Europe, however, pretty much nothing changed. The borders were pretty close to what they were when everything started.

It also set the spark of resentment in many of the British colonists in North America, which eventually led to the American Revolutionary War.

So, I don’t think it is really that much of a stretch to consider the Seven Years War to be a world war. It was a significant war for its time, with several hundreds of thousands of soldiers and civilians dying in conflicts around the world.

It was a conflict amongst the greatest colonial powers in the world. It was fought on five continents, and it had ramifications that we are still living with today.

To be sure, there are other conflicts that you could also define to be world wars. The Napoleonic Wars, the conquests of the Mongol Empire, some Ancient Roman Wars, and even the Bronze Age collapse have been called “world wars”.

…and it all was started by a 22-year old lieutenant colonel who would go on to do things such that launching a global war wouldn’t even rank among his most noteworthy achievements.

Today’s review comes from listener GoBears1983 over at Apple Podcasts in the United States. They write:

I love this podcast

I so appreciate the amount of work and research put into these short episodes! They are the perfect length for me to listen to two on my walk to work, and I usually end up googling something to learn more by the end of an episode. Thank you for the information overload you provide!

Thanks, GoBears1983!  Doing further research on my episodes is always a good idea. I usually am just able to scratch the surface of most topics, some of which can fill an entire book or even an entire academic career.