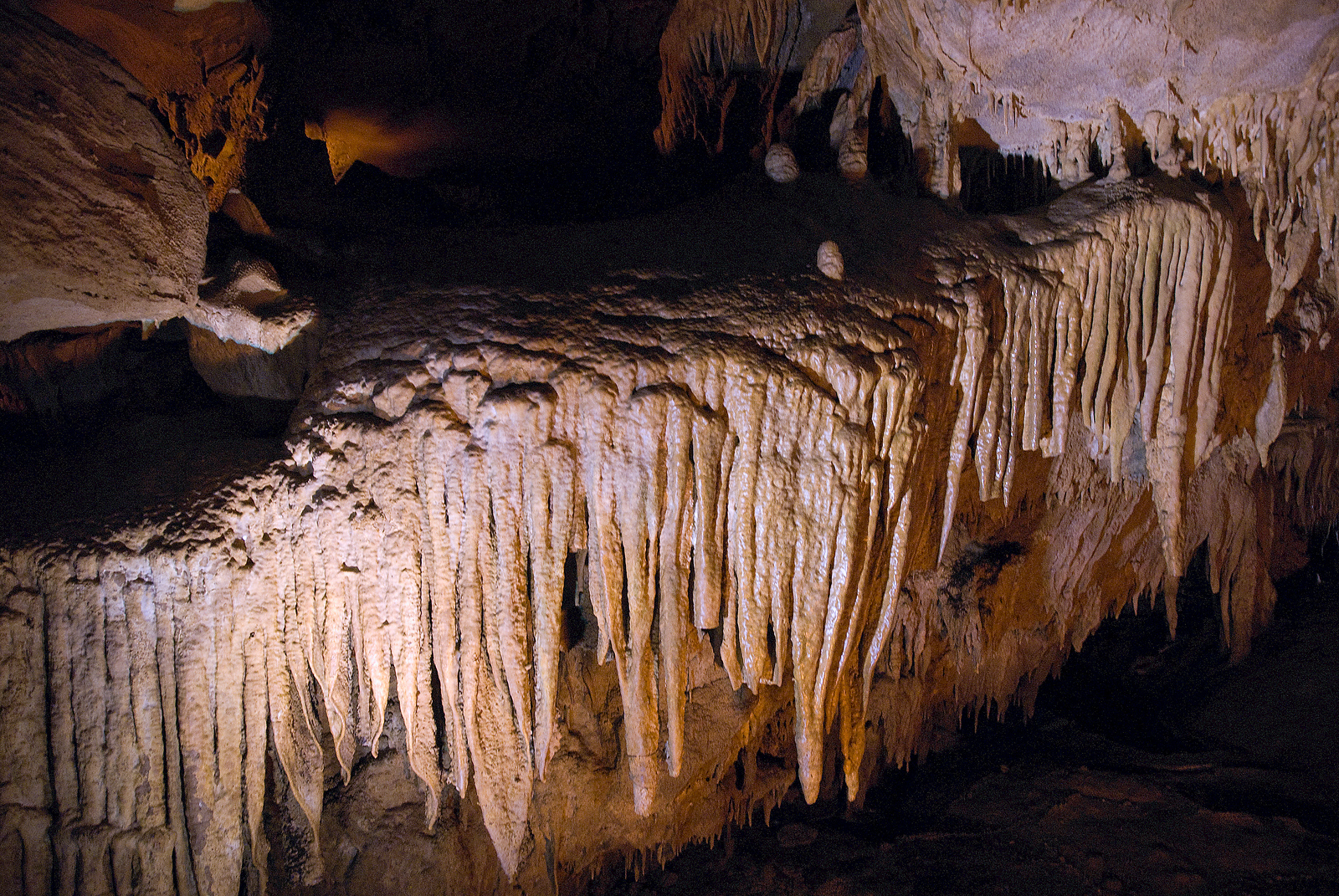 From the World Heritage inscription for Mammoth Cave National Park:

Mammoth Cave is the most extensive cave system in the world, with over 285 miles (456 km) of surveyed cave passageways within the property (and at least another 80 miles [128 km] outside the property). The park illustrates a number of stages of the Earth’s evolutionary history and contains ongoing geological processes and unique wildlife. It is renowned for its size and vast network of extremely large horizontal passages and vertical shafts. Nearly every type of cave formation is known within the site, the product of karst topography. The flora and fauna of Mammoth Cave is the richest cave-dwelling wildlife known, with more than 130 species within the cave system.

Mammoth Cave is the biggest cave system in the world. From a photography perspective, it is also the most boring. Given the way the cave system was formed, it doesn’t have much in the way of the majestic stalagmites or stalactites you see in other caves. I took over 200 photos in Mammoth Cave and walked away with 12 that were any good, and 4 of those were taken above ground. As an added kicker, they do not allow you to bring a tripod in the cave, which makes photography just a wee bit tricky.

Mammoth Cave National Park is a national park and UNESCO World Heritage Site located in the state of Kentucky in the US. This natural property listed into the UNESCO list in 1981 is recognized for having the largest network of natural caves and underground passages in the world. Moreover, these caves are also home to limestone formations. Hence, the park was established in 1941 to aid in protecting and preserving these cave limestone formations. According to a survey of the cave, this passageway stretches to over 560 kilometers in length.

Mammoth Cave National Park is an expansive cave system that covers up to 52,830 acres of land area. It is located primarily in Kentucky’s Edmonson County as well as some parts of Hart County and Barren County. This cave system is the longest known cave system in the world; in fact, the world’s second-longest cave system (which is the underwater cave of Sac Actun in Mexico) is only half of its entire length.

The limestone labyrinth is the most important feature of this cave system, aside from its world-record length. It is composed of Mississippian-aged limestone strata that are built with a layer of sandstone. Hence, this makes the entire cave system incredibly stable. There are nearly 400 miles of passageway within the cave. However, the cave system is still being studied and explored. It is therefore expected that the actual cave system is longer than what it is depicted to be as new paths and parts of the cave are continually being discovered.

The cave system is divided into different parts and the upper sandstone member is dubbed as the Big Clifty Sandstone. This area is composed of thin, sparse layers of limestone that are interspersed with some sandstone layers in some parts.

Within the park, there is a massive sinkhole known as Cedar Sink. The sinkhole starts off with a small river on one side before it disappears onto the other side. Within this cave, there also lives the endangered species of sightless albino shrimp.

If you are from the south, take the Interstate 65 and head to Exit 48 (also known as Park City Exit). Turn to KY-255 on your left and continue on until 255 where you must turn left as you reach Mammoth Cave Parkway. This route will lead you to the Visitor Center.

There are tours available for tourists who would like to visit the Mammoth Cave National Park in Kentucky. During the tour (which can last between 1 to 6 hours, depending on your chosen tour), you will be able to witness a few notable sights within the cave including the Frozen Niagara, Grand Avenue, and Fat Man’s Misery. These are all limestone formations within the cave that are distinctive and has become quite famous.

There are two types of tours to choose from: electric-lit routes or those wherein tourists are all required to carry their own paraffin lamps as you go about the tour. The Echo River Tour is one of the most famous types of yours inside the cave. In this tour, tourists will ride a boat to explore an underground river. However, this was discontinued in the early 1990s due to environmental and logistics constraints.