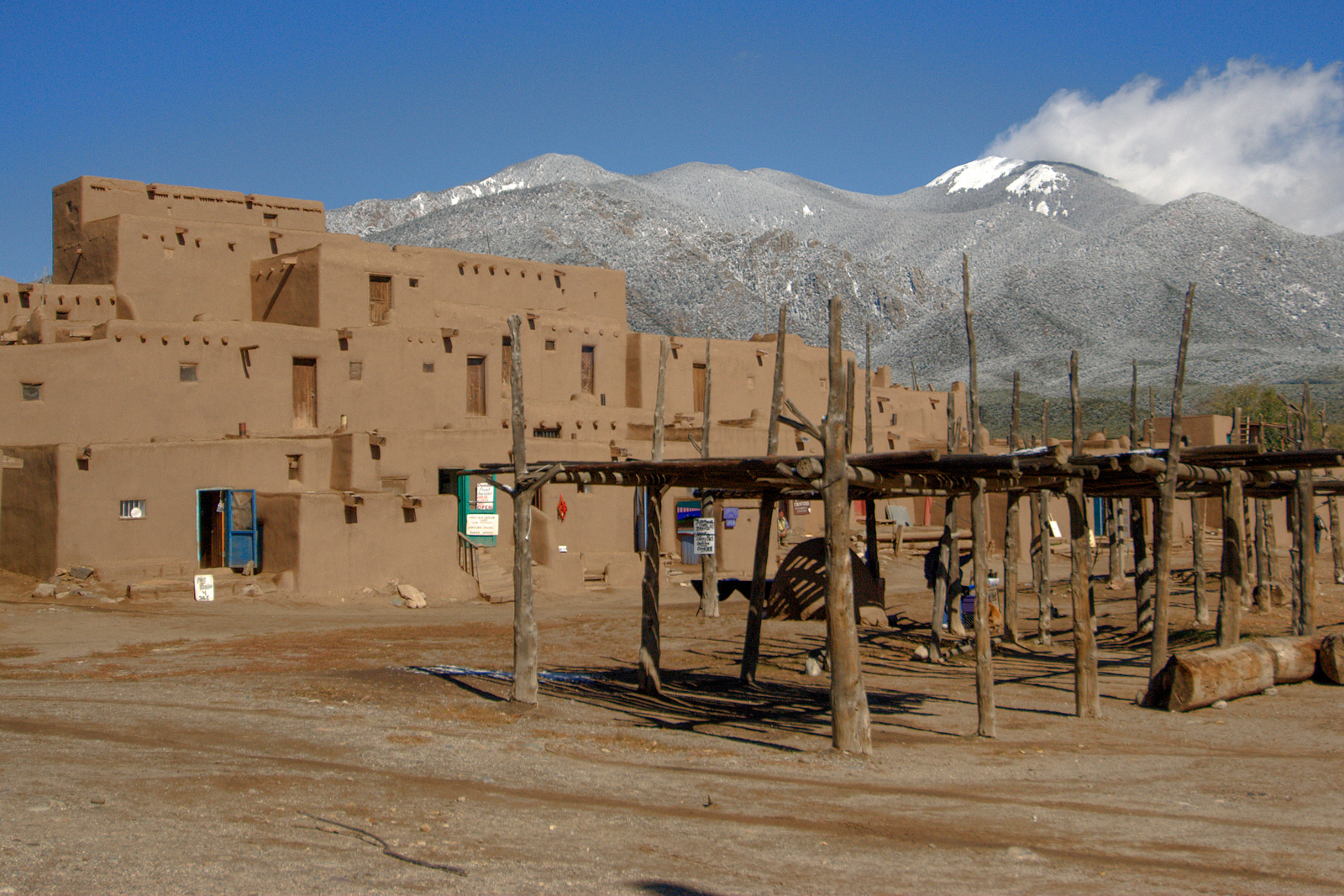 From the World Heritage inscription for Taos Pueblo:

Situated in the valley of a small tributary of the Rio Grande, this Pueblo Indian settlement, consisting of adobe dwellings and ceremonial buildings, exemplifies the enduring culture of a group of the present-day Pueblo Indians. It is one of a group of settlements established in the late 13th and early 14th centuries in the valleys of the Rio Grande and its tributaries that have survived to the present day and constitutes a significant stage in the history of urban, community and cultural life and development in this region. Pueblo de Taos is similar to the settlements in the Four Corners area of the Anasazi, or ancient Pueblo people at such places as Chaco Canyon and Mesa Verde, and continues to be a thriving community with a living culture.

Taos Pueblo is by far one of the most unique World Heritage sites I’ve ever visited and perhaps the most unique in the world. Unlike most cultural attractions it is not a historical ruin; it is a living community. The people who live in the pueblos forgo plumbing and electricity and cook in traditional mud ovens. The adobe is resurfaced every year to combat the damage done by the elements.

Pueblo de Taos, also known as Taos Pueblo, is a unit of the US National Register of Historic Places and the UNESCO World Heritage Sites. It also belongs to the New Mexico Register of Cultural Properties. In 1992, it was designated as a cultural site by UNESCO.

The site lies 1 mile from the modern city of Taos in New Mexico. The pueblo ruins at the site are deemed as the oldest continuously inhabited community in the country. It is also one of the 8 Northern Pueblos, although the Taos community is considered as the most private and conservative of these communities. The entire site measures at about 95,00 acres in land area and was inhabited by about 4,500 people. Today, there are still about 150 people that call this community their home. To preserve the tradition of the pueblo, there is no running water and electricity at these homes.

During the initial contact with the Taos community, the Spanish invaders described the architectural structures in Pueblo de Taos as adobe houses that were built closely next to each other. Some of these structures go as high as 5 to 6 stories high. The original structures had very few windows and no traditional doorways. Instead, there were square holes in the roof that can be used to access other floors in the building.

As for the materials used, these were suited for the rigors of the environment and the needs of the people that inhabit the land. They use wooden ladders, cedar logs, grass, mud, plaster, and layers of branches. It was in the late 16th century when the first Spanish-influenced architectural structures were built among the Taos Pueblo community.

The north side structure in the Taos Pueblo is the most notable of the structures within this UNESCO site. It is the largest multi-storied Pueblo structure that continues to exist until today. The adobe walls that make up this structure measure at several inches thick and was built primarily for defensive purposes. It is also the most photographed out of all the other buildings within this community.

The Taos Pueblo is located around a mile from out of the town of Taos, New Mexico. You can drive yourself to the pueblo from Taos. If you are traveling to Pueblo de Taos from outside of New Mexico or the US, you should book a flight to the nearest airport in the park: Albuquerque. The airport is located 135 miles south of Taos.

If you want to visit the Taos Pueblo in New Mexico, here are a few tips to keep in mind: