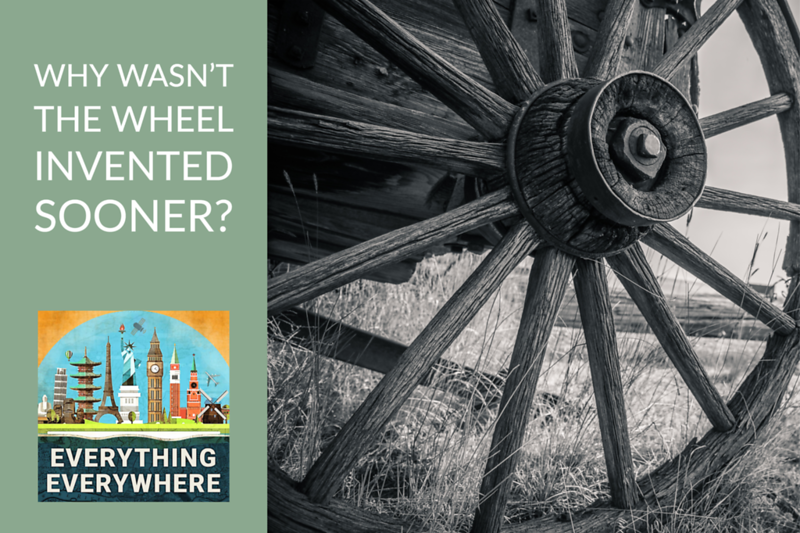 If you were to ask most people what the very first invention that humans came up with is, many of them might say the wheel.

It isn’t a bad guess, but believe it not, the wheel was nowhere close to being the first invention.

Learn more about why the wheel wasn’t invented sooner, on this episode of Everything Everywhere Daily.

The wheel is such a simple, fundamental invention, it seems like it is something that would have been around since before the rise of civilization.

In fact, you might have seen a cartoon at some point that had a caveman wearing animal skin who was sitting in a cave chiseling a wheel made out of stone.

Not only is such a scene absolutely absurd, but hopefully, by the time you are done with this episode, you’ll understand why such a thing couldn’t have happened.

To be sure the wheel is a very ancient invention, but it doesn’t pre-date recorded history, civilization, or agriculture.

Before we get into the weeds, let’s start with a definition of a wheel. A wheel isn’t just something that is a circle. Humans did figure out the circle really early on, but there was more to it than that.

A wheel is simply a circular object that is intended to rotate on an axle.

Obviously, we have no idea who invented the wheel. The earliest wheels which appear in the archeological record show around the year 4,000-3,500 BC in Sumeria in Mesopotamia.

That doesn’t date the wheel to the stone age or the paleolithic, but rather to the bronze age.

This dating of the invention of the wheel means that the technical history of humanity unfolded in a way that most people realize.

More importantly, the wheel came after humans had developed the ability to do elaborate metalworking with bronze.

The other thing that will surprise most people is that the first wheels, as far as we can tell with the evidence we’ve discovered, weren’t used for transportation. The first wheel was actually used for pottery.

This actually makes sense if you think about it. Pottery was ubiquitous pretty much everywhere in the known world and the first pottery dates back almost 24,000 years.

The development of the pottery wheel was just a technical innovation to more efficiently create and improve the quality of pottery.

I’ll probably do a future episode on pottery just because so much of what we know about the ancient world all comes through the lens of discarded pottery.

A pottery wheel only required a single wheel, not a pair of wheels like you might find in a cart so it was conceptually simpler, plus the wheel didn’t need to bear a great weight.

Before I go any further, I have to put a big verbal asterisk on this. The evidence for this isn’t cut and dry. The wheel very well could have come from Mesopotamia.

There is a fair amount of second-hand evidence of wheels, which implies that there might have been wheeled vehicles earlier, and to be honest, things always tend to be dated earlier and earlier, so it wouldn’t surprise me if that was the case with wheeled vehicles as well.

There are ancient images that look like they could be of wheeled vehicles, plus there are ruins of buildings that had entrances wide enough for carts.

Either way, even if the wheel dates back even older than 4,000 BC, there are several things about its creation where there is a general consensus.

There were several preconditions that were probably necessary for the wheel to be invented.

For starters, the first wheels were probably made out of wood. That means you needed a source of timber and large trees.

Second, and probably more importantly, you needed metal tools to saw a cross-section of the logs and chisels to shape the wheels.

Moreover, you probably needed domesticated draft animals which is why most people think that the wheel was probably developed somewhere in the vicinity of the Eurasian steppes.

The steppes are where horses were first domesticated, and where they need to develop the wheel would have been the greatest.

So far I’ve just been talking about the wheel as if the circular cross-section of a log was the invention. It really wasn’t. The key to the development of the wheel for use in transportation was the axel.

The axel is what makes a wheel useful. Without it, you have a glorified  serving platter or a really bad frisbee, and understanding why can help give a glimpse into why the wheel wasn’t developed 10,000 years earlier.

A wheel needs to rotate about the axel. The hole in the middle of the wheel has to be a really good fit. It can’t be too tight, or otherwise, there is too much friction and the wheel will not turn. If it is too loose, the wheel will wobble and won’t’ be stable.

The ends of the axel and the wheel holes have to be perfectly smooth to reduce friction.

The current thinking is that the wheel and axel were probably only invented once, and they spread across Asia, Europe, and Africa. Indeed, because it was a transportation technology, it was something that could spread rapidly.

We know that wheeled carts were probably in use in China around 2000 BC and were in the British Isles around 1000 BC.

Slowly over time, there were innovations that were made to the wheel. Primarily the development of spokes, which occurred sometime around 2000 to 1500 BC. The first evidence of spokes was found with the Sintashta culture in the Central Ural mountains. Spokes allowed for lighter wheels that could travel faster.

The other big innovation was putting an iron rim around the outside of the wheels, which was developed by Celtic peoples around the year 1000 BC.

The wheel spread pretty much everywhere in Europe, Asia, and Northern and Eastern Africa.

However, famously, the wheel was never used in the Americas.

Despite all of the large and advanced civilizations which arose in North and South America, none of them ever used the wheel for transportation or even for pottery. As far as we know, they didn’t even use a wheelbarrow.

The question for centuries has been why?

Civilizations in the Americas had advanced metalworking and had independently discovered bronze.

They clearly had the ability to do advanced engineering building enormous edifices like Machu Picchu in Peru, Tikal in Guatemala, and Teotihuacan (tay·uh·tee·waa·kaan) in Mexico. In all of these construction projects, they almost certainly used logs as rollers to move large stones.

Also, many of these civilizations had a very advanced system of roads which showed evidence of advanced engineering.

The really puzzling thing is that wheels were found in Central Amerian….in children’s today. There have been many small clay toys found in archeological digs that had wheels. They look like an animal, but with an axel going through their feet, with wheels on the end of the axels.

So if the early Americans had the technology to make wheels, had the construction ability to make roads, and clearly understood the concept of the wheel as found in children’s toys, why didn’t they take the next step to use the wheel?

The reason most people think wheels weren’t used in the Americas has to do with a lack of draft animals. The old world had horses and oxen. The new world didn’t.

Draft animals explain why most archeologists think that the wheel was probably invented somewhere in the Eurasian steppe because that is where horses were domesticated.  Before you had carts, you had sledges, which is like a cart with runners you just drag.

If you had a sledge, then the idea of a cart with axels and wheels would probably be much clearer.

I mentioned before that wheeled vehicles had spread to Africa, but I only mentioned the northern parts of Africa. Carts and chariots were quite common in Ethiopia, Sudan, and parts of the Sahel, and West Africa, but they never caught on in the south.

There was clearly trade and cultural communication amongst tribes and civilizations in Africa, so why were wheels only found in the north?

Again, it probably had to do with draft animals. In the case of southern Africa, it had to do with the tsetse fly, which made it very difficult for horses to thrive. There is evidence of horses, donkeys, and even camels further south in Africa, but it never had the cultural impact it did further north.

Also, the soil as you went further south was conducive for different agricultural methods. Bush-fallow rotation was popular, where you could burn and clear a plot of land, plant crops, and then let it grow wild again, and just repeat the cycle. That type of agriculture didn’t require the use of plows, which meant that draft animals weren’t necessary.

You might be wondering that in the Andes mountains, they had llamas that were domesticated. Why weren’t those in the Americas?

Llamas were pack animals, not draft animals. They could be loaded with packs, and they were primarily designed for traversing mountains, not for pulling plows or carts.

So, the wheel wasn’t just a simple invention that was made by cavemen. It was an innovation, along with the axle, that required several other inventions to come first before it could be created.

Moreover, it was draft animals that created the necessity which lead to the development of the wheel.

Without domesticated draft animals and advanced metalworking, we probably wouldn’t have wheels on our cars today.