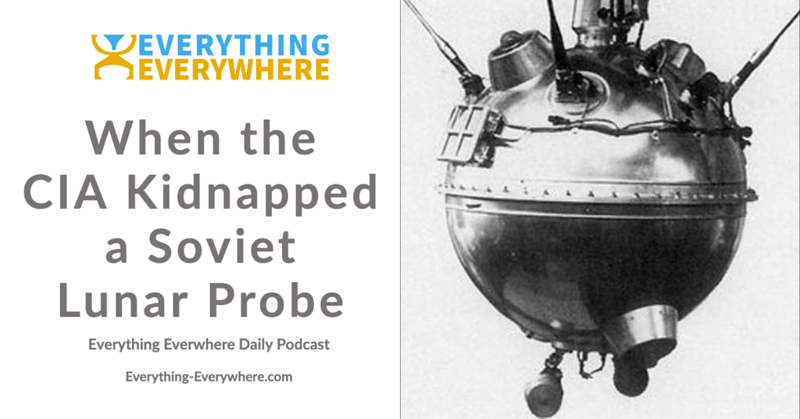 In the late 50s and early 60s, the US space program wasn’t doing great. The Soviets had beaten the US to almost every major first in space, and American rockets kept blowing up on the launchpad.

According to declassified CIA documents, one night the American’s did their best to get back, even if it was a bit underhanded.

Learn more about how the CIA managed to kidnap a Soviet Lunar probe on this episode of Everything Everywhere Daily.

If you are interested in the history of the space program and the space race, then CuriosityStream is the streaming platform for you. They have dozens of shows about this history of spaceflight, the exploration of the solar system, and of astrophysics.

If you love to learn, and if you are listening to this podcast you probably do,  then start your subscription by visiting Everything-Everywhere.com/CuriosityStream or by clicking on the link in the show notes.

When you think back to the space race, you usually will think of engineers with pocket protectors or scientists wearing lab coats. You don’t usually think of spies and cloak and dagger operations.

However, if you just realize that the space race was just part of the Cold War, then the idea really isn’t crazy at all. There was quite a bit of tomfoolery and skullduggery going on with the spy agencies of the United States and the Soviet Union.

In 1959 the American space program was not in a good place. The Soviets had launched the first satellite in 1957. Afterward, Americans had a number of rockets explode before they could get their first satellite into space in March 1958. (Please reference my previous episode on Vanguard 1)

The Soviets managed to get the first animal into space, and also basically set most of the other space firsts in the late 50s.

In January 1959, the Soviets launched the first probe to fly by the moon, Luna 1.  (In all fairness, this mission was actually a failure as the goal was to hit the moon, and they missed. However, they didn’t tell anyone that, so the world was none the wiser for decades.)

In September, they sent the first object to impact the moon, Luna 2. (It would be difficult to say that it landed on the moon because really, it just smashed into it and was destroyed….but it was on the moon.)

The next month in October, they actually managed to take the first photo of the dark side of the moon with Luna 3.

The United State did manage a lunar flyby in 1959 with Pioneer 4, but even with that, they were still woefully behind.

What I’m about to describe has actually been verified by the CIA, and there are documents on the CIA website which describe it at greater length. Some details were redacted from the declassified documents, but the gist of the story is true.

In 1959 the Soviet Union embarked on a multicountry exhibition showcasing its economic and scientific achievements. As the exhibition was open to the public, of course, the CIA sent people there to check it out.

When the exhibition was in Paris, the CIA noticed something that seemed a bit odd. The Soviets had an exhibit about the Luna probe. That wasn’t really surprising given the recent success that the Soviets had with their Lunar missions.

What was surprising, is that what the Soviets had on display didn’t look like a model.  It looked like it actually might have been a working version of an actual spacecraft and part of its propulsion system.

When the exhibition eventually traveled to Mexico City in November, they were ready. They realized that they could never get a look at it when it was on display as it was under guard 24 hours a day. They only time it wasn’t under guard was when it was in transport.

The original plan was to take the freight car it was located in while on a train, separate the car from the rest of the train, and take it to a separate facility where they could photograph it, and then connect it back to the train.

They didn’t have the resources to pull that off, so the next option was to try to get access to it while it was being transported by truck between the exhibition hall the railyard.

The CIA found out that the guard would take note of everything incoming at the rail yard, but didn’t have any way to contact the people running the exhibition, nor did he have a schedule of when things were supposed to arrive.

Basically, so long as something was checked off when it left and checked in when it arrived, there was a big opportunity there in the middle.

Somewhere mid-distance, the truck pulled over and the driver got out and a new driver stepped in. The original driver was taken to a hotel for the night and was given a nice room and a fine meal.

They threw a tarp over the crate on the flatbed of the truck and proceeded to a salvage yard they had rented for the evening.

They waited for half an hour in the truck to see if they had been followed. When the coast was clear, they set to work.

The crate was such that they could only access it from the top. Thankfully, the crate had been opened so many times, and there were so many wear and tear, that evidence of their activities would be hard to spot.

They went to work photographing and taking apart everything. They took off the panels covering the probe. The encountered a plastic seal and then had to contact the local CIA office to see if they could make a replacement in time. The office replied that they could, so they broke the seal and got into the probe even further.

By the time the sun started to come up, they reassembled everything and put the top back on the crate.

The Soviets had no idea what had happened.

There is no evidence that the information gathered actually was used in spacecraft design. Things were moving quite rapidly in the late 50s and early 60s, so anything they found would have been quickly made obsolete.

This operation was done more for military reasons than on the behest of NASA but does show just how important the space race was to the history of the Cold War.