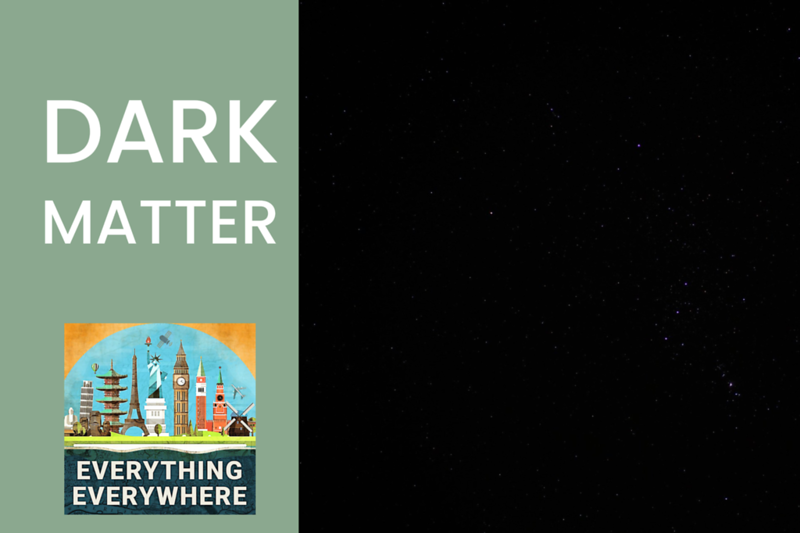 Over the last several centuries, there have been many unsolved questions that scientists have put their minds to solving.

Most of them were eventually resolved. However, there are some questions that are still outstanding and we aren’t really any closer to solving them than we were before.

Learn more about dark matter and dark energy, on this episode of Everything Everywhere Daily.

What is dark matter?

We don’t know. Honestly, no one can really say that they have any clue. There are a lot of theories and hypotheses floating around about what it might be, but so far, nothing has panned out.

It is the biggest outstanding mystery in physics today.

First of all, let’s set the groundwork with the physics we know.

When a satellite orbits the Earth, or a planet orbits the Sun, we have a pretty good handle on how that works. The further away an object is from the center, the slower it moves.

In our own solar system, each planet further from the Sun moves slower than the planets before it.

The same rules apply to satellites that travel around the Earth, or to the moons of Jupiter.

Just as moons orbit planets and planets orbit stars, so too do stars orbit the center of a galaxy.

Here is the other thing. Astrophysicists have a pretty good idea as to how stars work. We have cataloged over 84 million stars already. We can classify stars by their mass, and it is possible to know how much the total mass of stars is.

The stars further out are going far faster than they should be, and this doesn’t make sense.

Something has to be providing the gravitation to make this happen, and we don’t know what it is, and we can’t see it.

Hence, it is called “dark matter”.

The problem was identified well over 100 years ago, and at its core, the problem is one of addition. Things just don’t add up.

In 1884, well before we even knew about galaxies outside of our own, Lord Kelvin made an observation that the velocities of stars going around the center of the Milky Way didn’t match up with the mass of the stars we can see in our galaxy.

Kelvin hypothesized that there must be something out there that we can’t see which is responsible for the increased velocity.

The term “dark matter” was first used in 1906 by French mathematician and physicist Henri Poincaré.

Over the decades, the evidence that there is something out there that we can’t see that is influencing gravity has kept piling up.

Gravity can bend light like a lens and there is an effect called gravitational lensing. In the measures which have been taken, light is bent due to much more gravity than there should be.

Cosmic microwave background radiation points to the same thing, as do the formation of galactic clusters, and other observations.

As instruments, techniques, and computational power have improved over time, the evidence has kept piling up.

The current estimate is that the matter we can see only makes up about 16% of all matter, and the other 84% is dark matter.

So the stuff we can’t see, is like, most of the stuff.

So, if we don’t know what it is, what are some of the theories as to what it might be?

One theory is that it might be something called WIMPs, or Weakly Interactive Massive Particles.

This could be particles like neutrinos or some other unknown subatomic particle that doesn’t really interact with normal matter, but still has some effect on gravity.  Neutrinos are everywhere. In just the time it took to read that last sentence, trillions of neutrinos pass right through your body…and through the Earth.

They just pass through almost everything as if it were a ghost. They are insanely hard to detect, but they have been detected. However, nothing about our knowledge of them would make up for all the gravity that we are seeing.

There are other theoretical particles called gravitinos or axions.

There are researchers working on this line of attack, but so far no dice.

Another theory, which is a counterpoint to WIMPs, is something called MACHO’s, or “massive astrophysical compact halo object” (you really have to love astrophysicists’ ability to come up with acronyms).

This would be a regular old matter, but stuff that doesn’t emit light that we can see. This could be brown dwarfs, think an even bigger Jupiter, neutron stars, black holes, or just other stuff like the stuff we know, but it just doesn’t emit radiation.

The problem with this is that things like dust clouds still emit infrared radiation that it has absorbed from other sources, and there can be emissions from around things like black holes.

Also, if there were more heavy elements, it wouldn’t really fit with what we know about star formation and the creation of elements.

MACHO’s are probably the least likely candidate at this point.

One other possibility is that dark matter doesn’t really exist at all. Maybe, our understanding of gravity is just wrong. Just like Einstein improved upon Newton’s gravitational theories, perhaps what we know from Einstein needs some improvement as well.

There have been several proposed new ideas on what gravity is, which would also try to bridge the gap between gravity and quantum physics, which is the other big outstanding mystery in physics.

However, these haven’t really been proven or adopted by the wider physics community.

Well, what about dark energy? I mentioned that before as well. What is the deal with that?

Well, as with dark matter, dark energy is an attempt to try to understand something which has been observed but hasn’t been explained.

Astrophysicists have long known that the universe was expanding. However, the assumption was that the expansion would eventually slow down and maybe even reverse due to gravity.

However, in 1998 researchers found something astonishing. Not only was the expansion of the universe not slowing down, but it was accelerating!

For something to accelerate there needs to be some force or energy behind it. This mysterious energy has been dubbed “dark energy” because no one knows what it is.

Here too, attempts to solve the puzzle have been for naught so far.

Others hold that there is some anti-gravity force that only works at very vast distances.

Yet others have postulated that dark energy is really just a case of poor measurement. It might not actually exist at all. That the data was really just an artifact of something else which makes it appear to be accelerating.

For both dark matter and dark energy, we are left with a great big “we don’t know”.

If our observations are correct, then when you combine both dark energy and dark matter together, over 95% of our universe consists of matter or energy which we can’t observe.

Most of the advances on this topic have been in determining what dark matter and energy are not, more than what they actually are. That might not sound like progress, but it is. As Sherlock Holmes noted, when you’ve eliminated everything else, whatever is left has to be right.

So, lest you think we have it all figured out, there are still major mysteries out there that science hasn’t figured out, and in this case, the mysteries might just make up the vast majority of the universe.