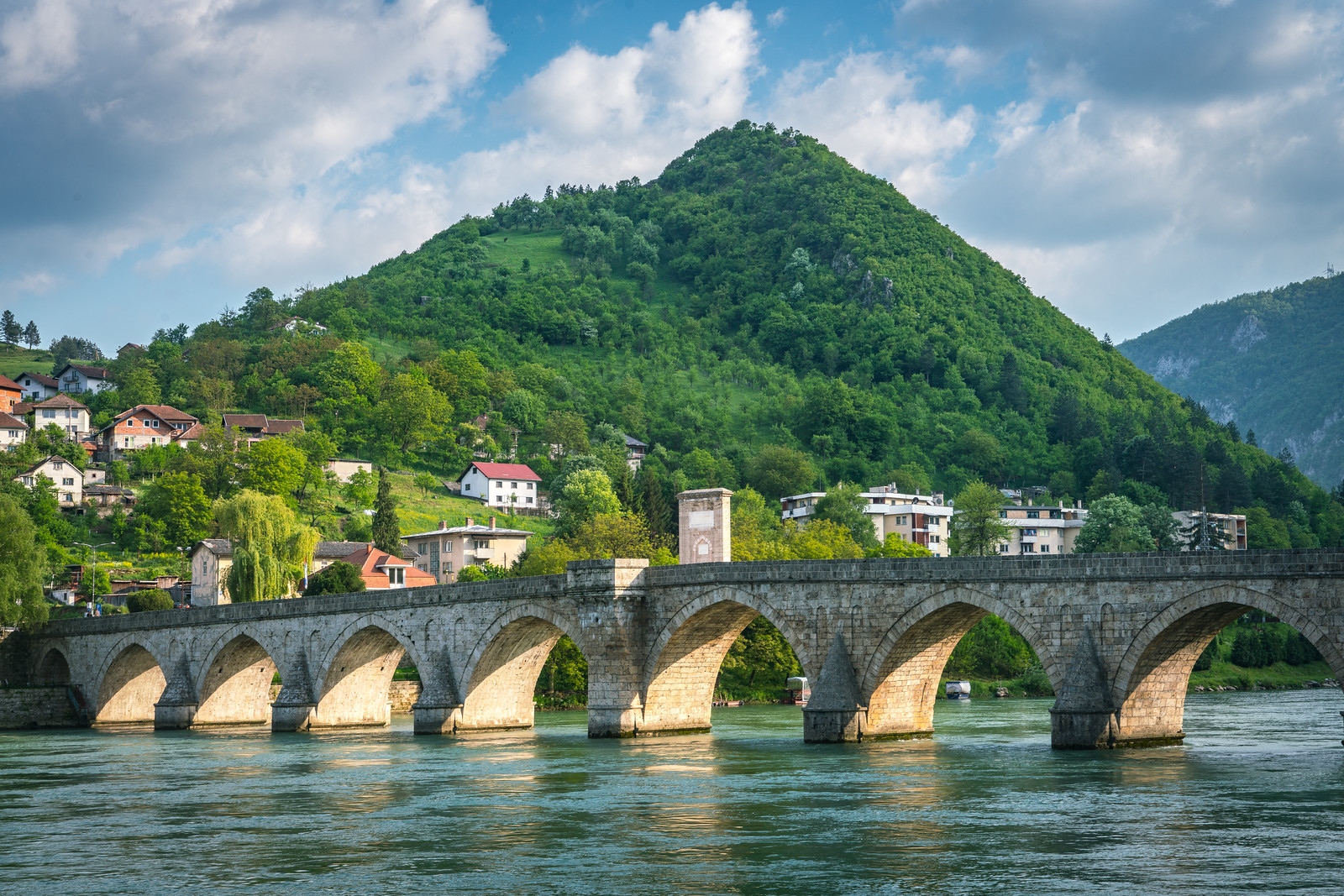 As it turns out, without even realizing it, I passed right by Višegrad (and thus the bridge) when driving from Sarajevo to Serbia. I immediately pulled my car over when I realized my dumb luck after having not paid close enough attention to my route in Google Maps.

Mehmed Paša Sokolovic is … a bridge. From a visitation standpoint, there isn’t much about the bridge per se to draw casual visitors. That said, the city of Višegrad is nice, and the river valley is beautiful. But the bridge’s historical role and architectural feats are the key reasons this bridge made it onto the UNESCO list.

Visegrad is about a two-hour drive from Sarajevo, so it can easily be visited on a day trip. The bridge is for pedestrian traffic only, so you can’t drive on it, but there is a place to park just off the highway, near the start of the bridge. As there is really only one major road going through town, the bridge is almost impossible to miss.

Mehmed Paša Sokolovic Bridge in Višegrad is a cultural UNESCO World Heritage Site in Bosnia and Herzegovina. This bridge features an arch design and was inscribed into the UNESCO list in 2007 during the 31st session. This bridge crosses the Drina River and was constructed in 1577 based on a design by Architect Mimar Sinan—it spans a length of 1795 meters.

The Mehmed Paša Sokolovic Bridge in Višegrad across the Drina River in the east of Bosnia and Herzegovina was built at the end of the 16th century by the court architect Mimar Koca Sinan on the orders of Grand Vizier Mehmed Paša Sokolovi?. Characteristic of the apogee of Ottoman monumental architecture and civil engineering, the bridge has 11 masonry arches with spans of 11 m to 15 m, and an access ramp at right angles with four arches on the left bank of the river. The 179.5 m long bridge is a representative masterpiece of Sinan, one of the greatest architects and engineers of the classical Ottoman period and a contemporary of the Italian Renaissance, with which his work may be compared. The unique elegance of proportion and monumental nobility of the whole site bear witness to the greatness of this style of architecture.

Mehmed Paša Sokolovi? Bridge in Višegrad is recognized by UNESCO as it is one of the best examples of Ottoman architecture and civil engineering to still exist today. This bridge was constructed at the end of the 16th century through the guidance of an Ottoman architect. Sinan is considered one of the greatest architects and engineers to arise from the Ottoman period. He is also known as a contemporary of Italian Renaissance. Hence, his works feature influences from both disciplines.

This important bridge in Višegrad was initially constructed as a symbol of power. It’s important to point out that this bridge was built at a time when the Ottoman Empire’s power was at its summit. It has come to symbolize power and wealth of the region, especially at a time when trade and prosperity were abundant. The bridge was constructed in 1571 and completed in 1577.

The Višegrad bridge is the apogee of the monument architecture and civil engineering techniques in the Ottoman Empire. The bridge features 11 masonry arches that each span about 11-15 meters each. Meanwhile, it also features an access ramp that is positioned at right angles and comes with four arches.

Mehmed Paša Sokolovi? Bridge in Višegrad is believed to be the best example of Mimar Sinan’s masterpiece. According to the UNESCO listing for this site, it’s the best showcase of “elegance of proportion” and a “witness to the greatness” of this architectural style.

In 2010, an agreement was signed between the Višegrad municipality with the Republika Srpska Cultural Ministry in cooperation with UNESCO to renovate the bridge. A 3.5 million Euro budget was allotted for this project. The bridge suffered some damage during the two World Wars—three arches were damaged during the First World War, and five additional arches were also damaged during the Second World War.

It has undergone several periods of restoration starting in 1664 and until the 1950s. This renovation project was intended to fortify the bridge and maintain its integrity. It is also a move to ensure that it will last for generations to come.

Getting to Mehmed Paša Sokolovic Bridge in Višegrad

Višegrad is an easy day trip from Sarajevo and worth a day of exploration. The bridge is near the downtown and main touristy area of Višegrad, right here. It’s also easy to visit Mehmed Paša Sokolovic Bridge in conjunction with several other important UNESCO sites in the region.

Interesting Fact: This bridge was featured in the book The Bridge on the Drina, by Nobel Prize-winning author Ivo Andric. This makes for a fascinating read for anyone planning to visit and view the architectural masterpiece, as well as learn a bit more about the complex and intertwining Balkan and Ottoman history.

View the complete list of UNESCO World Heritage Sites in Bosnia and Herzegovina.