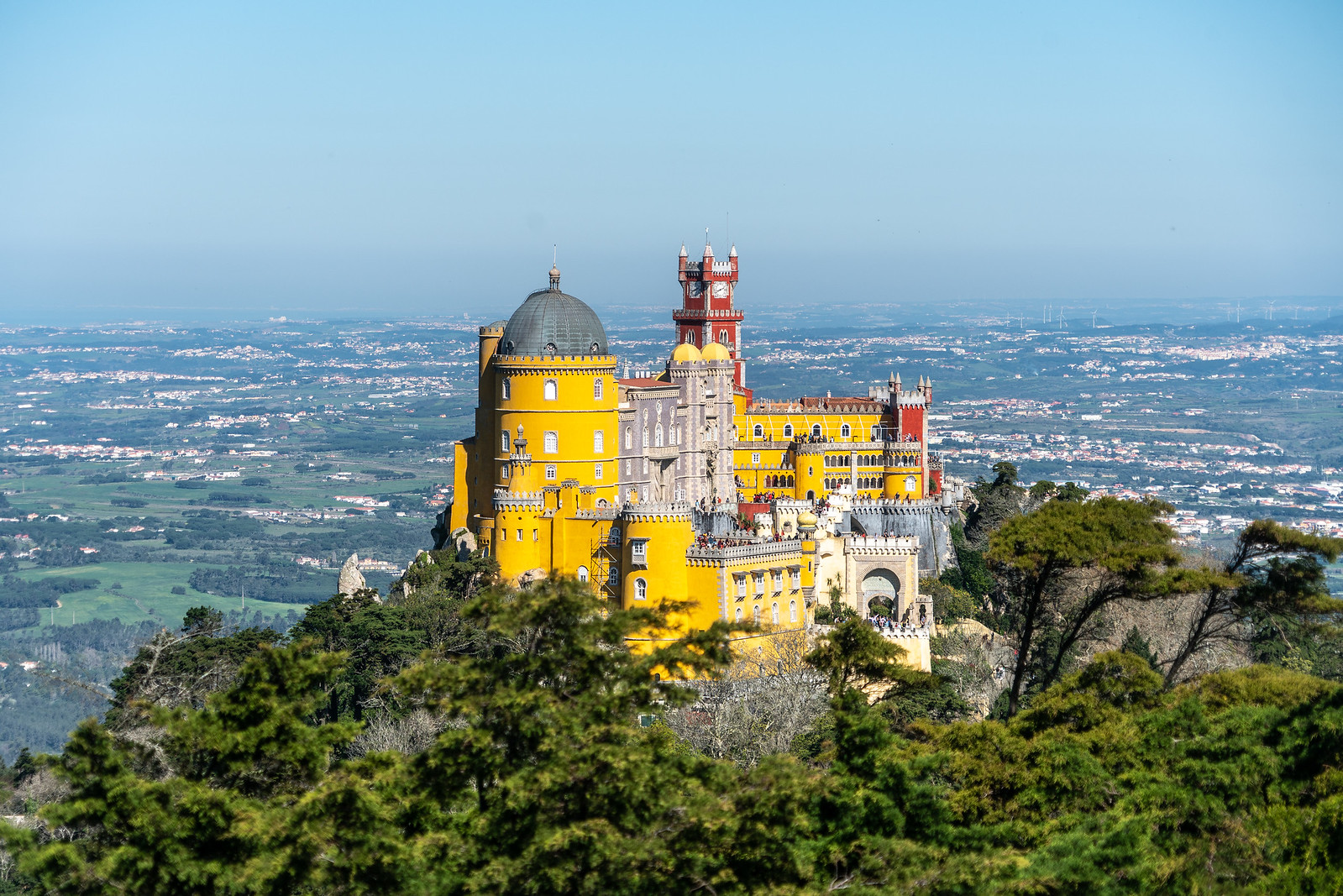 There are 17 UNESCO World Heritage Sites in Portugal. There are 16 cultural sites and 1 natural site that make up this list.

The Alto Duoro Wine Region was established by the government of Marquis of Pombal in 1756. This town stands out because it is one of the best examples of a wine-producing region in the world. It is best known for the Port wine but also a few other high-quality table wines. The wines that are produced by the region are from the terraces near the river Duoro.

This region is also culturally important in Portugal as it showcases how wine production has altered the landscape of the region. At the same time, this wine region reflects the pace of life in the area. It was added to the list of the UNESCO World Heritage Sites in Portugal.

This cultural site in Portugal is one of many sites in the world that is directly linked to the maritime explorations that established the great civilizations that is known in history. The port of Angra is where fleets from Africa and the Indies would dock. Hence, it has important ties to the maritime world. During the 15th and 16th centuries, the Port of Angra served as the link for Europe to the ‘New World’ for about three centuries.

In addition to the maritime value, Angra do Heroismo is also the best example as to how an urban model was adapted to the climatic conditions. The town is protected by a series of hills and two natural basins. A defensive system was also built in the form of two large fortresses.

The Convent of Christ in Tomar is another cultural site in the list of UNESCO World Heritage Sites in Portugal. It is a former Catholic convent or monastery within the civil parish of Tomar. This convent was the former stronghold of the Templar in the 12th century. However, it got dissolved in the 14th century and it turned into the Knights of the Order of Christ. The convent, together with the Castle complex of Tomar, is a culturally significant site in Portugal.

In 1995, the cultural landscape of Sintra is one of the UNESCO World Heritage Sites in Portugal. The property comprises the Serra di Sintra, which is filled with natural landscapes and historical landmarks. During the pre-modern times, the region is considered as the site of prehistoric religious practices. There were many archaeological remains that were unearthed in various parts of the region with some experts claim as dating back to the Bronze Age. Meanwhile, a large burial tomb was also discovered on top of the hills. In the 19th century, this saw the rise of Sintra as they were overcome by the Romantic movement. There were several palaces and structures that were also put up during this time.

Garrison Border Town of Elvas and its Fortifications (2012)

This UNESCO World Heritage property encompasses an extensive fortification that was built in the 17th and 19th centuries. This site also features the world’s largest bulwarked dry ditch system. Within the fortified walls in the city, there are several important structures such as barracks, military buildings, churches, and monasteries. The town of Elvas is located near the Portuguese-Spanish border and has been dated to originate in the 10th century. The fortifications built on this town was crucial during the 1659 Battle of the Lines of Elvas.

The Historic Centre of Évora is another cultural site in the list of UNESCO World Heritage Sites in Portugal. This site is noted for being the best example of the Golden Age of Portugal. To this day, plenty of medieval structures and buildings that were built during the 15th century remain standing. Hence, these structures help to preserve the medieval landscape in the town. At one point, Evora also served as the seat of the Portuguese royals, so it had political and historical value as well.

Guimarães is another historic town in Portugal. The medieval buildings and structures in the city’s historic center exemplify how the colonies have greatly influenced the town’s identity. It is one of the best-preserved historical towns in Portugal. At the same time, while maintaining its colonial influence, it has also shown great evolution from the 15th to the 19th century. Some of the most notable structures in the town’s historic center include the Town Hall, Palace of the Dukes of Braganca, and the Church of Nossa Senhora de Oliveira.

Historic Centre of Oporto, Luiz I Bridge and Monastery of Serra do Pilar (1996)

The Historic Centre of Oporto, Luiz I Bridge and Monastery of Serra do Pilar were inscribed into the list of UNESCO World Heritage Sites in Portugal in 1996. This commercial port rose to the height of its prosperity in the 14th and 15th centuries. The city is located next to the estuary of Duoro River and its coastline extends to the Atlantic Ocean. For this reason, Oporto is considered as having played a crucial role in the shipbuilding industry in Portugal. This industry later on aided in the economic development in Porto particularly in its production of wine.

This UNESCO World Heritage Site encompasses the landscape of Pico Island. Added to the list of UNESCO World Heritage Sites in Portugal, this vineyard reflects and represents the life and culture in Pico Island. This vineyard is protected by walls and divided into various plots. The walls that cover the vineyard are made with basalt blocks that were stacked without mortar. This region also exemplifies how viticulture is an important part of this cultural landscape.

This cultural site in Portugal is centered on the Roman Catholic church in the town of Alcobaca. This monastery was established by the first Portuguese king during the medieval period (specifically in 1153). To this day, this monastery has maintained its close association with the royals in Portugal.

In addition to its royal ties, this monastery and church were among the first Gothic buildings in the country. Its historic and artistic significance combine to make it worthy of a world heritage status.

The Monastery of Batalha was inscribed as a World Heritage Sites in 1983. This Dominican convent is located in the town of Batalha in Portugal. The monastery was built to commemorate the Battle of Aljubarrota, which took place in 1385. This monastery also served as the burial church of the Aviz dynasty that ruled Portugal in the 15th century. This convent is esteemed as one of the best examples of late Gothic architecture with a hint of influence from the Manueline style.

Monastery of the Hieronymites and Tower of Belém in Lisbon (1983)

This world heritage property features two early 16th-century historical structures that are located in the port of Lisbon in Portugal. These two structures –the Monastery of the Hieronymites and the Tower of Belem – signify the Age of Discovery in Portugal. They were also constructed using the Portuguese Manueline style of architecture.

Both of these secular structures are deemed valuable as a historical monument. The monastery, in particular, served as a house of prayer for the seamen or navigators that go in and out of the port. Meanwhile, the monastery also served as a burial church for the Portuguese royals. As for the Tower of Belem, this structure was part of a larger defense system and ceremonial gateway in Lisbon.

In 1998, the Prehistoric Rock Art Sites in the Côa Valley and Siega Verde was added to the list of cultural UNESCO World Heritage Sites in Portugal. These sites were dated by archaeologists to have originated from the time of the Upper Paleolithic period (or around 22,000-10,000 BC). The rock art that was discovered in these sites is considered one of the best examples of prehistoric art in Portugal.

This public university in Portugal completes the list of cultural sites recognized by UNESCO to be of world heritage importance. This Portuguese university was established in 1290 and is located in Coimbra, Portugal. This is one of the oldest universities in the world that continues to be of operation. It is also Portugal’s oldest university while being known as one of the top educational and research institutions. The university has moved to different locations over the centuries, but its current location was established in 1537.

This is the only natural site to make it to the list of UNESCO World Heritage Sites in Portugal. This ancient forest was added to the list in 1999 due to its biological diversity. In addition, it is home to an outstanding laurel forest. The average altitude in the forest is around 300 to 1,300 meters in some areas. Meanwhile, the entire forest listed in the UNESCO property measures at about 22,100 hectares in land area. The forest is notable for its high-quality hardwood trees.

Located 30 km northwest of Lisbon, the site was conceived by King João V in 1711 as a tangible representation of his conception of the monarchy and the State. This imposing quadrangular building houses the king’s and queen’s palaces, the royal chapel, shaped like a Roman baroque basilica, a Franciscan monastery and a library containing 36,000 volumes. The complex is completed by the Cerco garden, with its geometric layout, and the royal hunting park (Tapada). The Royal Mafra Building is one of the most remarkable works undertaken by King João V, which illustrates the power and reach of the Portuguese Empire. João V adopted Roman and Italian baroque architectural and artistic models and commissioned works of art that make Mafra an exceptional example of Italian Baroque.

Sanctuary of Bom Jesus do Monte in Braga (2019)

The site, a cultural landscape located on the slopes of Mount Espinho, overlooking the city of Braga in the north of Portugal, evokes Christian Jerusalem, recreating a sacred mount crowned with a church. The sanctuary was developed over a period of more than 600 years, primarily in a Baroque style, and illustrates a European tradition of creating Sacri Monti (sacred mountains), promoted by the Catholic Church at the Council of Trent in the 16th century, in reaction to the Protestant Reformation. The Bom Jesus ensemble is centered on a Via Crucis that leads up the western slope of the mount. It includes a series of chapels that house sculptures evoking the Passion of Christ, as well as fountains, allegorical sculptures, and formal gardens. The Via Crucis culminates at the church, which was built between 1784 and 1811. The granite buildings have whitewashed plaster façades, framed by exposed stonework. The celebrated Stairway of the Five Senses, with its walls, steps, fountains, statues, and other ornamental elements, is the most emblematic Baroque work within the property.