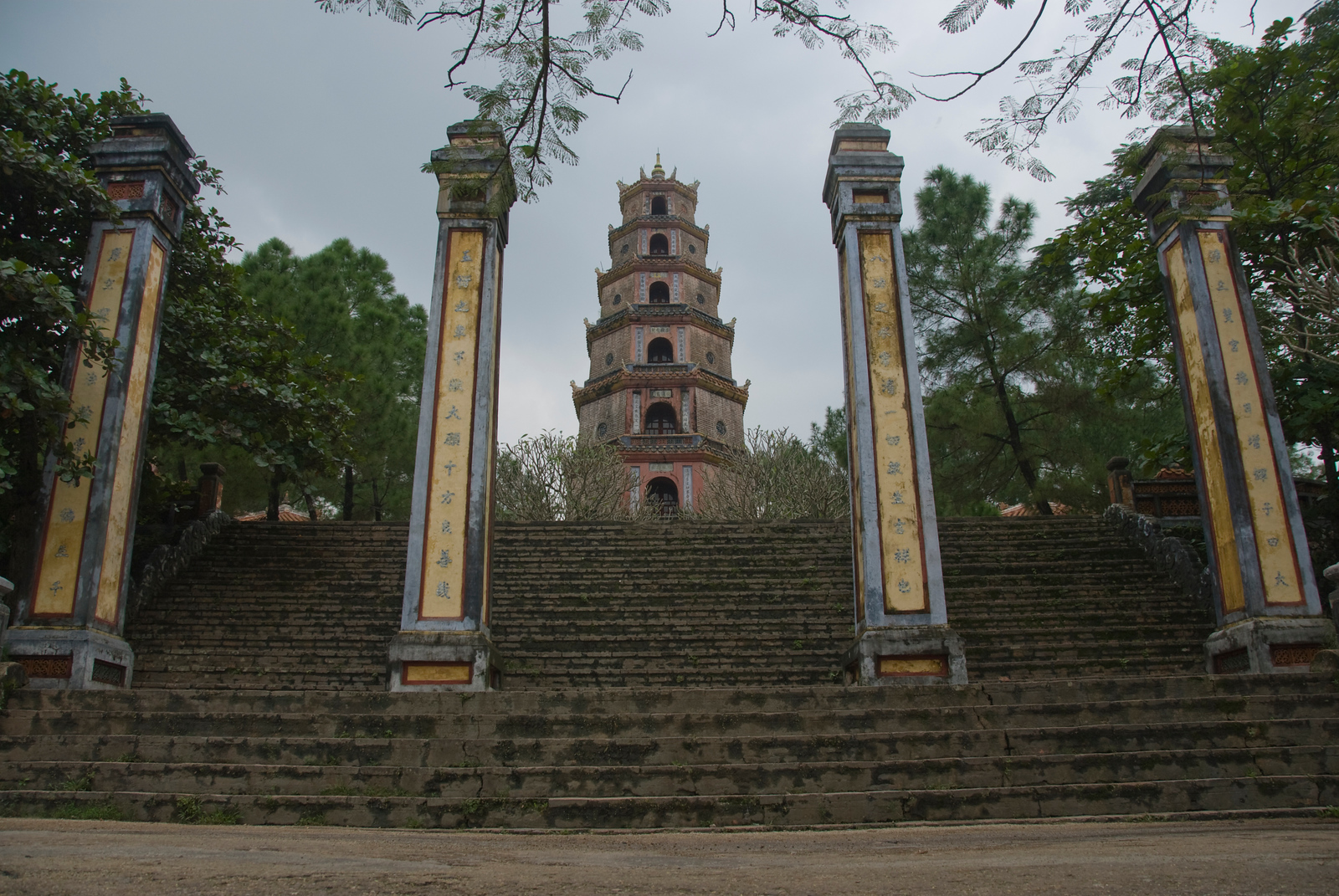 From the World Heritage inscription for the Complex of Hué Monuments:

The Complex of Hue Monuments is located in and around Hue City in Thua Thien-Hue Province in the geographical center of Vietnam and with easy access to the sea. Established as the capital of unified Vietnam in 1802 CE, Hue was not only the political but also the cultural and religious center under the Nguyen Dynasty, the last royal dynasty of Vietnamese history, from 1802 to 1945 CE.

The plan of the new capital is in accordance with an ancient oriental philosophy and respected the physical conditions of the site.

The Ngu Binh Mountain (known as the Royal Screen) and the Perfume River, which runs through the city, give this unique feudal capital an entire setting of great natural beauty as well defining its symbolic importance. The site was chosen for a combination of natural features – hills representing a protective screen in front of the monuments or taking the role of “a blue dragon” to the left and “a white tiger” to the right – which shielded the main entrance and prevented the entry of malevolent spirits. Within this landscape, the main features of the city are laid out.

The structures of the Complex of Hue Monuments are carefully placed within the natural setting of the site and aligned cosmologically with the Five Cardinal Points (centre, west, east, north, south), the Five Elements (earth, metal, wood, water, fire), and the Five Colours (yellow, white, blue, black, red).
The central structure is the Hue Citadel area which was the administrative center of southern Viet Nam during the 17th and 18th centuries CE. Within the Hue Citadel were located not only administrative and military functions of the Empire but also the Imperial Residence, the Hoang Thanh (Imperial City), the Tu Cam Thanh (Forbidden Purple City) and related royal palaces.

Tran Binh Dai, an additional defensive work in the north-east corner of the Capital City, was designed to control movement on the river. Another fortress, Tran Hai Thanh, was constructed a little later to protect the capital against assault from the sea.

Hue is analogous to other Asian cities such as Kyoto, Gyeongju, and Nanjing in that it is a former imperial city. Unlike the other cities, the history doesn’t date back nearly as far. The current structures only date back to the early 19th century.

There actual city of Hue is pretty large; almost one million people. The history part of the city consists of the walled outer city and the walled inner city, which contains the royal residences. Most of the royal buildings are undergoing renovation/reconstruction and there currently isn’t much to see.

In addition to the walled city, the Thien Mu Pagoda (shown above) is also part of the World Heritage site and is located on the river several kilometers out of the city. You can easily get there via bicycle rickshaw.

The City of Hue in Vietnam is often referred to as the “Imperial City”. It is best known for the walled palace within the citadel, which is the Complex of Hué Monuments recognized by UNESCO as an important cultural site. This city also served as the former Imperial capital of Vietnam. It was built in the late 14th century (specifically in 1362) and was completed after 203 years. The building is considered an important symbol of wealth and power. This site was added to the list of UNESCO World Heritage Sites in Vietnam in 1993.

The layout of this monument can be broken down as follows: Imperial City gates, Purple Forbidden City main gates, outer court, temples and places of worship, inner court, gardens, and pavilions.

The city of Hue is located along the banks of Huong River (also known as the Perfume River), which is about 3 hours from Da Nang. The former imperial capital features several historic structures within the Complex of Hué Monuments. However, the most impressive of them all would have to be the Ngo Mon Gate. Once upon a time, this was available exclusively for the royal family and their servants only. Within this structure, you will also find the tombs of Emperor Minh Mang and Tu Duc. During the Nguyen Dynasty (the last royal dynasty in Vietnam), it served as the political, cultural and religious center.

Several of the structures within the Complex of Hué Monuments were built during the onset of the 19th century. They were modeled after the Forbidden City in Beijing, China. The citadel is surrounded by 6-meters high and 2-and-a-half kilometers long walls.

The Complex of Hué Monuments is known for the rich architectural details and the exquisite landscape features. However, the cultural and historical importance of the site should not be overlooked. The layout of the monuments and structures are also based on the cosmological alignment. Specifically, they represent the Five cardinal points (east, west, north, south and center) in relation to the Five elements of nature (earth, metal, wood, fire, and water).

Here are some simple reminders when you plan to visit the Complex of Hué Monuments:

To get to the Imperial City of Hue and see the historic monuments, there are several transportation options. For international visitors, you can take any flight to Hanoi or Ho Chi Minh city. From there, you can take another flight to Hue’s Phu Bai Airport. There are currently three airline companies that service flights to this airport. Once you reach the airport, you must travel 15 kilometers to reach the city center.

Another option is to travel by train. You can travel from Hanoi or Ho Chi Minh City to Hue as there are several trips during the day. Other travel options include bus or car.

The Complex of Hué Monuments in Vietnam has been through 3 wars. Those wars have left an imprint on the state of the structures, such that some of the monuments and structures are nearing destruction. The modern development and human settlement near the area have also somewhat contributed to the decline of the monuments in terms of the integrity of the structure. Nonetheless, since the site had been named into the list of UNESCO World Heritage Sites in Vietnam was able to preserve its condition. In fact, it was a key focus of the conservation team to preserve the key elements that were linked to the cultural value of the site such as the town planning and monumental arts.