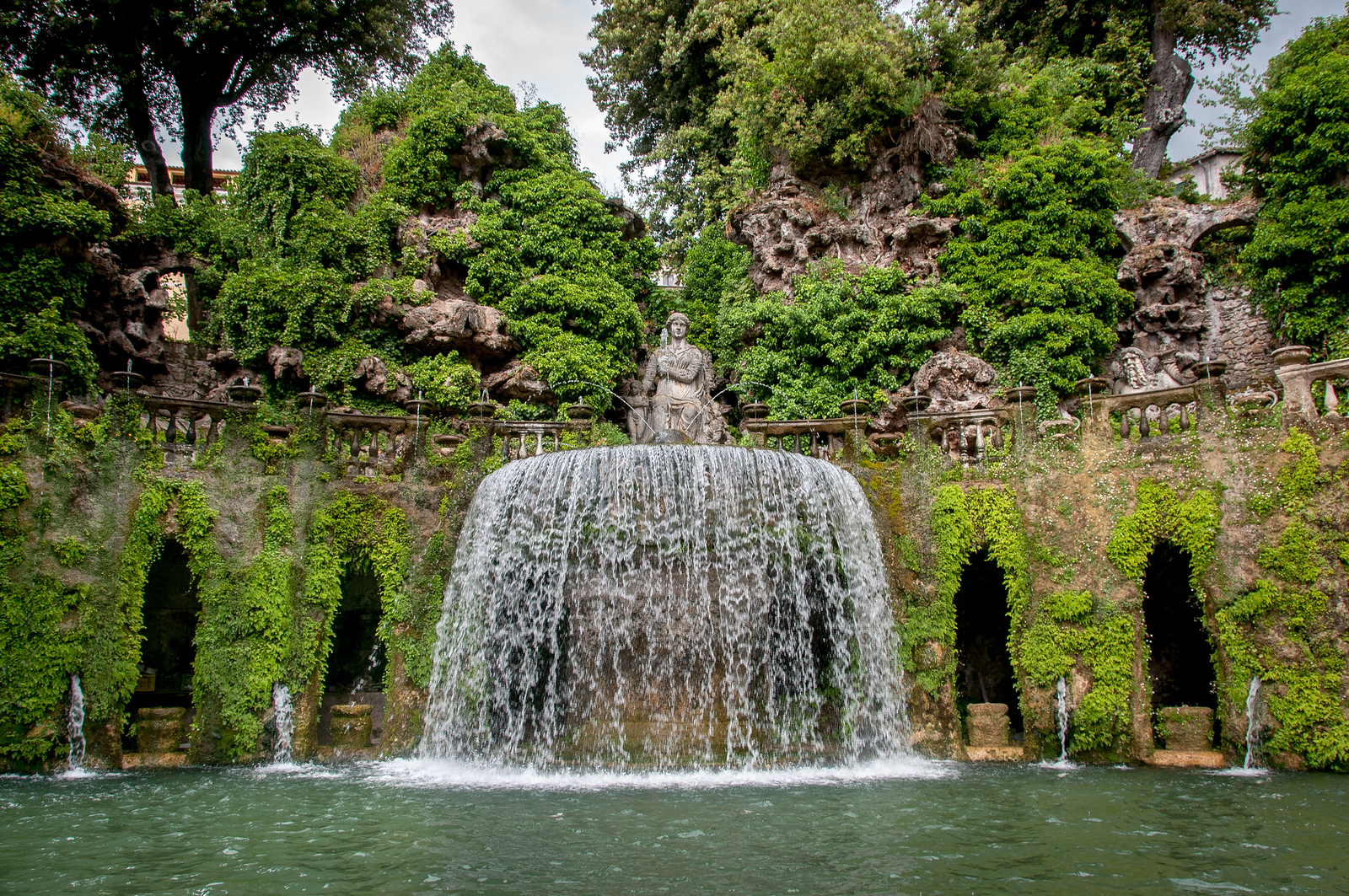 From the World Heritage inscription for the Villa d’Este, Tivoli:

The gardens of the Villa d’Este had a profound influence on the development of garden design throughout Europe. They are among the earliest and finest of the giardini delle meraviglie and symbolize the flowering of Renaissance culture.

On 9 September 1550, Cardinal Ippolito II d’Este (1509-72) arrived in Tivoli, having obtained the post of governor of the town. The official residence assigned to him in Tivoli, part of the monastery of the church of Santa Maria Maggiore, did not suit him. He therefore, decided to build a splendid villa with gardens, the design of which is traditionally attributed to Pirro Ligorio (1500-83).

The ensemble composed of the palace and gardens forms an uneven quadrilateral and covers an area of about 4.5 ha. The plan of the villa is irregular because the architect was obliged to make use of certain parts of the previous monastic building. On the garden side, the architecture of the palace is very simple: a long main body of three stories, marked by bands, rows of windows, and side pavilions that barely jut out. This uniform facade is interrupted by an elegant loggia in the middle, with two levels and stair ramps, built by Raffaello da Firenze and Biasioto (1566-67). The lower level is decorated with the Fountain of Leda. The main rooms of the villa are arranged in rows on two floors and open onto the garden. The private apartment of the cardinal, consisting of four rooms, is on the same level as the courtyard, and the reception rooms, linked together at the back by a long corridor called the Manica Lunga, are on the lower level.

The Villa d’Este garden stretches over two steep slopes, descending from the palace down to a flat terrace in the manner of an amphitheater. The loggia of the palace marks the longitudinal and central axis of the garden. Five main transversal axes become the central axis from the fixed point of view created by the villa, as each of these axes terminates in one of the main garden fountains. Even though the central aisle stops beyond the axis of the Hundred Fountains to give way to a network of diagonal paths that make it easier to climb back to the palace, the latter remains the main visual axis. The first main transversal axis, bordering the flat part of the garden, the Peschiere, is composed of a row of three basins. At the extreme east of this water chain is the Fontana dell’Organo: it is rectangular in shape with two orders crowned by a double-scrolled pediment. The water organ, the work of Claude Vénard, was inspired by examples from antiquity: the interaction between water and air produced. [CL – something missing]Beyond the Peschiere, two staircases start climbing towards the villa. The side stairs, the Scalinata dei Bollori of 1567, are flanked by two stepped parapets crowned with basins pouring out torrents of water. Beyond the transversal path of the Dragons, the central stairway is divided into oval flights around the Fontana dei Draghi. This nymphaeum and its exedra is the real centre of the ensemble. Four-winged dragons emerge from the middle of the large oval basin, spurting out jets of water. The parapet is ornamented with vases from which water also flows. The Alley of the Hundred Fountains is formed of three long superposed basins, its water crossing the entire garden.

However, the most striking effect is produced by the big cascade flowing out of a krater perched in the middle of the exedra. Jets of water were activated whenever unsuspecting people walked under the arcades. Behind the exedra rises an artificial mountain, with three alcoves holding statues of the Sibylla of Tibur with her son Melicerte (1568) and the river divinities Erculaneo and Anio. To the west is its counterpart, the Fountain of Rome (Rometta) built in 1567-70.

The Fontana del Bicchierone (Fountain of the Great Glass), built according to a design by Bernini (1660-61) was added to the decoration of the central longitudinal axis in the 17th century. This fountain is in the shape of a serrated chalice, from which a high jet of water falls into a conch shell. During this period the large pergola at the original entrance to the villa was also replaced by the Rotunda of the Cypresses (c . 1640), a circular area adorned with four small fountains and surrounded by ancient cypress trees.

There are two world heritage sites in the town of Tivoli, located outside of Rome. Both sites are also historic villas, but the similarities between the two end there.

The Villa d’Este is a Renaissance villa created by the Cardinal Ippolito II d’Este, it was created to impress other curial figures in his bid to one day become pope. (he failed) The villa is best known for its numerous and elaborate fountains which can be found all over the property. The fountains were all run on gravity and remain so to this day.

Of the two world heritage villas in Tivoli, the Villa d’Este is by far the more popular attraction, mainly because of the fountains. There are bits of the property that are in need of renovation, but for the most part, it is in good shape.

The villa is only a 30-45 min drive from Rome in good traffic. There is also a train and bus service which will take you to Tivoli. The villa is near the center of town and is adjacent to the cathedral. Plan about 90 minutes for a full tour of the site.

Villa d’Este is a cultural UNESCO World Heritage Site in Italy. It is a 16th century villa located in Tivoli that was inscribed by UNESCO in 2001. This UNESCO site is best known for its terraced hillside garden that features Italian Renaissance style. In addition, the garden is built with numerous fountains that add a sense of elegance and luxury to this villa’s garden.

Today, Villa d’Este has been converted into an Italian state museum. It is also recognized as the triumph of Baroque as it is one of the best examples of Baroque style.

There are two components to Villa d’Este that is recognized by UNESCO: the Villa and the Gardens and Fountains. In order to gain a better understanding of the extent of this UNESCO site’s grandeur and cultural heritage, it is important to look into each component.

To access Villa d’Este, you need to do so via the doorway at Piazza Trento near the entrance to the Church of Santa-Maria Maggiore. Villa d’Este was commissioned for by Cardinal Ippolito II d’Este along with Lucrezia Borgia. The Este family is known as patrons of the arts and as humanist scholars during the Renaissance period. Ippolito became the Archbishop of Milan despite being only 10 years old. At 27, he was sent to the French Court and became an advisor to King Francis I. He was also a candidate for Pope for 5 times but was never selected.

During this time, Tivoli was popular for summer residences since the altitude facilitated cooler temperatures. In addition, it is also located within close proximity to Villa Hadriana, which was Emperor Hadrian I’s summer residence. This is where and when d’Este commissioned for a new villa to be built that could rival that of Villa Hadriana’s prominence and any other Roman sites within the vicinity. He tapped prominent classical scholar Pirro Ligorio to build a plan for a new villa and garden. The goal was to exceed anything that the Romans had built at that time. The ruins of Hadrian’s villa enabled them to obtain an abundance of marble and statuary.

The construction was initially planned at the end of 1550. However, during this time, d’Este was sent off into various diplomatic missions forcing the construction plans to stop. When Pope Pius IV replaced Pope Paul IV after the latter’s death, d’Este was once again appointed the Governor of Tivoli. This enabled him to resume construction of the villa in 1560.

Various houses, public buildings, and roads were demolished during the process of building Villa d’Este. From 1563 to 1565, the construction work was ongoing to build terraces, arcades, grottoes, nymphauems, and niches. The was from the nearby river Aniene had to be diverted in order to support the system of channels, water jets, cascades, and pools at Villa d’Este. It was Ferrarese architect-designer Alberto Galvani who supervised the plans for the villa.

The Villa d’Este and its complex systems of fountains and gardens is largely responsible for its fame and glory. There are 51 fountains and nymphaeums, 398 spouts, 64 waterfalls, 364 water jets, and 220 basins that make up its garden. It takes 875 canals, channels, and cascades in order to feed water throughout these water systems. The most impressive thing about these fountains is that they are not powered by pumps – all of them are working through the force of gravity alone.