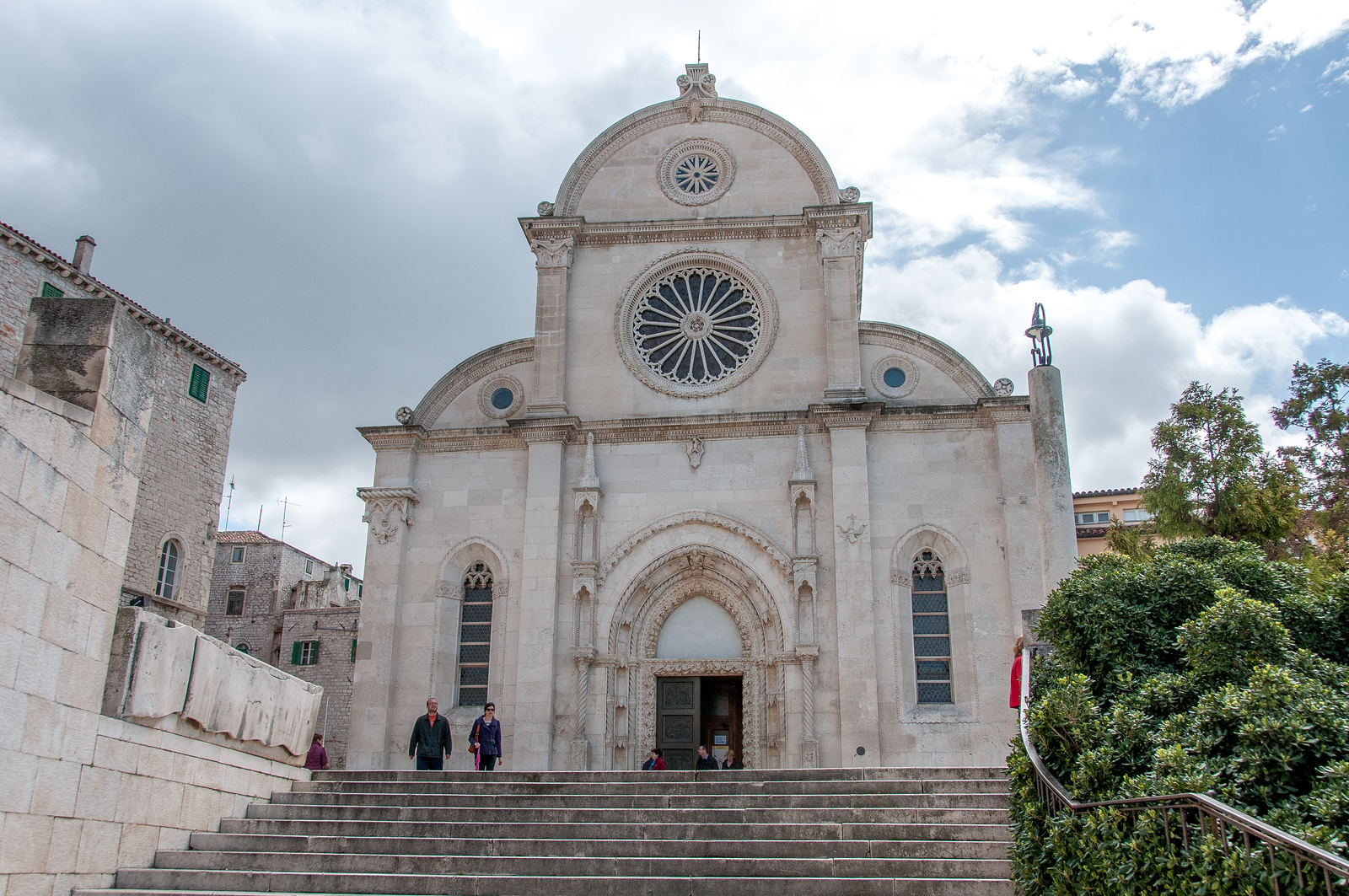 The Cathedral of Šibenik is the fruitful outcome of considerable interchanges of influences between the three culturally different regions of northern Italy, Dalmatia and Tuscany in the 15th and 16th centuries. These interchanges created the conditions for unique and outstanding solutions to the technical and structural problems of constructing the cathedral vaulting and dome. The structural characteristics of the cathedral make it a unique and outstanding building in which Gothic and Renaissance forms have been successfully blended.

Šibenik is a small town on the Dalmatian coast, opening out on a bay separated from the Adriatic by the Sveti Ante (St Anthony) channel and a multitude of tiny islands. The town was founded in the 10th century by the Subic family; it consists of a labyrinth of narrow streets and small squares climbing from the level of the cathedral to the fortress at the summit of the old town. Early in the 12th century, it came under the sway of the kings of Hungary, who granted its independence. In 1116 and 1378 Šibenik suffered at the hands of the Venetians. They took the town in 1412, renaming it Sebenico and holding it until the fall of the Venetian Republic in 1797. The cathedral of St James owes its present appearance to three successive periods of construction between 9 April 1431, when the first stone was laid, and 1535.

Georgius Mathei Dalmaticus built the cathedral, with the exception of the nave and the aisle walls, by assembling slabs of stone and the contiguous sections of pilaster and ribbing using a particular technique for the joints. The roofing of the aisles, as well as that of the apses and the dome, is made from stone ’tiles’. These roofing tiles are laid side by side with their horizontal edges overlapping, and the joints are made by the perfect fit. On the dome, the tiles are held in place by stone wedges fitted with great precision and are inserted into the ribs as into a portcullis. This type of construction could well have taken its inspiration from shipbuilding, or from the experience of many artists whose first trade was the working of wood as joiners, cabinet-makers, or model makers. The solution adopted for the cathedral at Šibenik was made possible by the outstanding quality of the stone used, which came from the stone quarries of Veselje, on the island of Brac, which are still in operation to this day.

St. James’ Cathedral isn’t the grandest or most beautiful cathedral in Europe let alone Croatia. Its inclusion on the world heritage list seems out of place compared to other great and historic cathedrals that have been listed.

The real reason I think St. James Cathedral is on the world heritage list is its method of construction. There was no mortar used in the walls. The stones were carefully cut and stacked without anything holding them together.

There are several great world heritage sites in Croatia. However, I don’t think St. James’ Cathedral is one of them. If you are in Šibenik or driving down the Dalmatian coast it is worth a visit (you can probably experience the whole in the 15 minutes) but only the hardcore world heritage site fan is probably going to find it of interest.

The Cathedral of St James in Šibenik is a cultural UNESCO World Heritage Site in Croatia. Inscribed in 2000, this Roman Catholic Church features Renaissance style architecture. It is the seat of the Diocese of Šibenik. The groundbreaking for the church took place in 1431 but it was completed in 1536.

Aside from being recognized as a UNESCO World Heritage Site, The Cathedral of St James in Šibenik is the largest and most important structure from Dalmatia’s Gothic-Renaissance period. The cathedral was built to honor Saint James the Greater. It is also recognized as a Cultural Good of Croatia.

About The Cathedral of St James in Šibenik

The Cathedral of St James in Šibenik is notable as a UNESCO site because this Gothic-Renaissance church was built entirely out of stone. The church took over a century to complete from the time of its groundbreaking as it was built in three phases. During these three phases, there were also three architects who worked on building this church.

When The Cathedral of St James in Šibenik was first built, it followed the Venetian Gothic style. The master builder Juraj Dalmatinac was the one who initially started to work on the church. He had dedicated his life into the building and designing this church until he passed away in 1473. He started the basic monumental plan for The Cathedral of St James in Šibenik. He was responsible for designing the domes, transept, baptistery, and the sacristy.

But when two other architects stepped in – Georgius Mathei Dalmaticus and Niccola di Giovanni Fiorentino – they incorporated purely Renaissance architectural details into it. The characteristic sculptures were also added to the building. The slabs of stones that were used for constructing The Cathedral of St James in Šibenik were taken from the island of Brac. The same set of stones was also used for making the dome of the church.

The key features of The Cathedral of St James in Šibenik on the exterior side include the western façade. It is richly decorated with Gothic elements, particularly the two rose windows. The structure of the roof complements the elegant façade beautifully. The nave and lateral aisles also feature a barrel roof. Another notable feature on the exterior side is the Lion’s Portal. The church’s long north façade features two flanking columns that are supported by lions. The columns also depict the figures of Adam and Eve. Finally, the church’s exterior feature 71 life-sized sculpted heads. They depict a wide range of subjects like soldiers, fishermen, peasants, and old men, to name a few.

Within the cathedral, there are several notable features as well such as the decorative frieze, 15th-century wooden crucifix, the baptistery, and the elegant balustrade. When you explore the domed vault as well, you will find several Gothic-Renaissance stone ornaments.

During the Second World War, The Cathedral of St James in Šibenik experienced massive damage. The fighting in 1991 also caused significant damage to the church. There have been numerous repair and reconstruction works done on the church over the years. The goal of these reconstructions is to carry out the original model and techniques of the church.