I carry around a lot of electronics. Way more than most people who travel. For the first two and a half years of my trip I lugged around a big six-outlet power strip that I was using on my home computer. It was a generic model I picked up a Home Depot and was built for the garage. It was big, it was heavy and I was more than happy to get rid of it.

I honestly never gave much thought to my power strip. The power strip is probably the lowest item on the totem pole in your traveling pack of technology. Nonetheless, when I was contacted by the folks at Monster Cable back in December and asked if I wanted to try their 6 outlet travel power strip, I jumped at the chance.

There isn’t much to review in how the power strip functions. A power strip has a pretty simple function: electricity goes in one end and out the other. In this, it works just like any other power strip and will work at any voltage level you will find around the world. 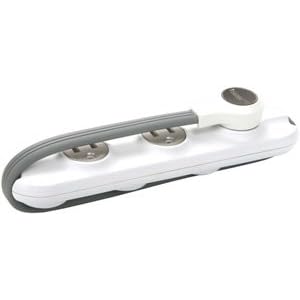 The brilliance of this product comes in the design. The space for the outlets are staggered on either side of the power brick saving space. Rather than putting six outlets on one side like you would normally see, you have three on each. The cord is short but exactly long enough to wrap around and plug into itself for storage. The plug that goes into the wall is connected on the side to make it more flush when stored.

There has only been one problem I’ve had with it, and that isn’t really much of a problem. The plates over the outlets on the strip are dark grey plastic circles. I had one pop off while I was in Fiji. They appear to serve no purpose other than aesthetics, so it didn’t effect its functionality.

The one feature I would like to see in the future would be the addition of a USB port for charging an iPod/iPhone. (NOTE: It turns out there IS a model with a USB port. It is on a 4 port model and sells for about $40)

The Amazon.com reviews of the product have been as glowing as mine. 77/99 reviews have been 5 starts, with an additional 12 being 4 stars.

I’m not entirely certain how much you can improve on a travel power strip. This one is small and lightweight enough that it can get lost in my computer bag, yet it functions as a full-blown power strip. I’ve made this my pick of the week on an episode of This Week In Travel and I expect this to be a staple item in my bag for foreseeable future.