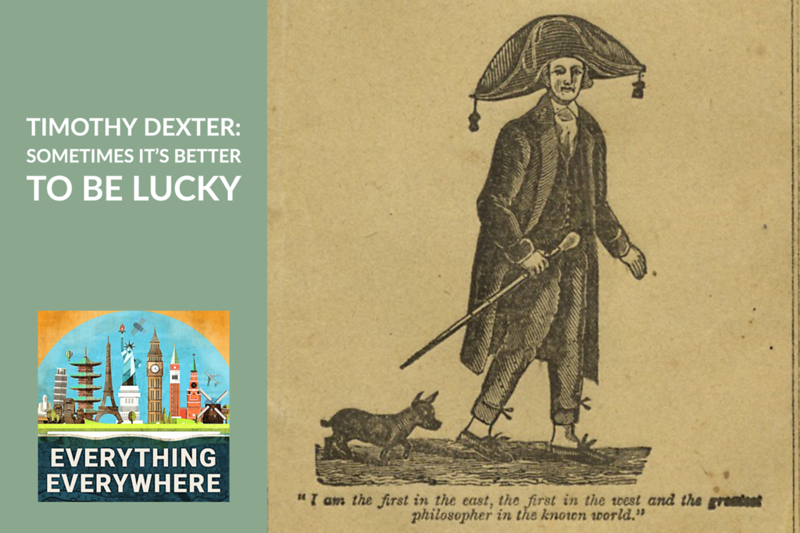 To be sure, having intelligence, skill and foresight can certainly lead to success in business.

But sometimes, it is far better to be lucky than good, and no one embodies this more than Lord Timothy Dexter.

Learn more about Timothy Dexter and how he stumbled his way into a fortune, on this episode of Everything Everywhere Daily.

Timothy Dexter started life with very humble beginnings. He was born in the town of Malden in the Massassuchets Bay Colony in 1747.

He didn’t receive much of an education growing up. When he was eight years old he dropped out of school to work on a farm.

At the age of 16, he became an apprentice to a tanner. It was a fine trade to be in back in the day, but nothing which would make you wealthy.

When he finished his apprenticeship, he was given a set of clothes by the tanner who he worked for. It was called a freedom suit.

He sold his freedom suit for eight dollars and twenty cents and used that money to relocate to Newburyport, Massachusetts.

This was where his good luck started.

While in Newburyport, he met the woman he would marry, Elizabeth Frothingham. Elizabeth was widow and 10 years older than Dexter. She had four children and a very nice house in Newburyport.

There he set up shop making gloves and selling other leather goods as well as reselling blubber from whalers.

By the end of the Revolutionary War, he had saved up several thousand dollars, which was quite a bit of money back then.

So far, his story is nothing special. He was a middle-aged man living in Newburyport who had a fine business.

It was at this point that he began a string of insanely successfully, yet at face incredibly stupid, investments.

The first investment was in Continental Dollars. During the Revolutionary War, the Contentinal Congress issued the first American currency, and it quickly became worthless. The phrase “not worth a continental” came from this currency.

Almost no one accepted the currency by the end of the war, yet many people, especially poorer people, were paid in this currency and could do nothing with it.

After the war, many of the wealthy citizens in Newburyport began buying Continentals, mostly as a charity gesture. Dexter, however, wanted to earn respect amongst the local elite who never quite accepted him, went all in.

Later, when the federal government was formed, they agreed to purchase all of the outstanding continental dollars at 1% of face value.

Dexter made a killing.

His success in currency trading seems relatively normal in comparison to what he then did.

He used the money he made from currency investing and purchased two ships that shipped goods to Europe and the Caribbean.

Despite his success, he was extremely gullible and desperately wanted to be accepted by high society.

Someone suggested that he should ship bed warmers down to the Caribbean, so he did it.

Bed warmers, as the name would suggest, are used to keep a bed warm. They look like frying pans with a lid on top with a very long handle. You would fill the pan with coals from a fire and then slip it under a mattress to keep you warm at night.

These were completely useless in the Caribbean.

So, when he shipped the bed warmers down to the Caribbean, and everyone had a laugh at the expense of Timothy Dexter. He had purchased 42,000 of them.

But Dexter had the last laugh because the bed warmers sold out. Molasses manufacturers found the bed warmers to work great as long-handled ladles for dipping into molasses vats.

They never used them before because no one else had thought to ship bed warmers down to the Caribbean. He sold them all at a 79% mark up.

They next convinced him to ship wool mittens to the Caribbean, and again he sold them all. He found a ship that was on its way to Siberia that had space in their ship. They bought out the entire stock to resell them.

Newburyport had a problem with stray cats. The city fathers voted on destroying all the cats and the motion failed. The next day Dexter ran an ad in the local paper offering to buy any cats, and that he would treat them well and find a home for them.

Dexter took the cast and shipped them down to the Caribbean where warehouse owners gladly paid a hefty price for them, to rid their warehouses of rat infestations.

He shipped bibles to the West Indies. He purchased bibles at what he called 12% under half price or 47 cents.  He created a pamphlet that was distributed in the islands that everyone needed to have a bible or they would go to hell. He sold 21,000 copies and cleared $47,000.

He shipped wool gloves to Polynesia where they were bought by Portuguese merchants on their way to China.

He cornered the market on whalebone in Massachuttes. He purchased 340 tons of whalebone and sold it had a 75% mark up. It was used in corsets, collars, buggy whips, and a host of other products. Whalebone was the plastic of its day.

Perhaps his greatest trading feat was when he shipped coal to Newcastle, England.

For the non-British people in the audience, the phrase “sending coal to Newcastle” is a euphemism for doing something useless. Newcastle was a huge coal-producing region and if there was one thing they didn’t need to be shipped in, it was coal.

Sure enough, Timothy Dexter literally shipped coal to Newcastle on the bad advice of an associate.

In an incredible stroke of dumb luck, there was a coal miner strike going on at the time, and he managed to sell out his shipment.

All of these odd, but successful trades made Dexter a very wealthy man.

All of his wealth never gained him the acceptance of high society that he sought. Despite obviously having some sort of business talent, he was still very uneducated and had a very eccentric and abrasive personality.

He purchased a giant mansion and then proceeded to create a sculpture garden with wooden statues of 40 famous people. These included George Washington, Thomas Jefferson, Napoleon, and of course, himself.

He wrote a book and published it, giving copies away for free. The title of the book was A Pickle for the Knowing Ones. It was about 8,800 words long and it was filled with spelling errors and it lacked any punctuation…and when I say spelling errors, I mean almost every other word is misspelled.

The book went through eight printings, and in one of the later printings he added punctuation…..at the end of the book. He literally just added rows of commas and periods at the end and told the reader to insert it themselves.

In the introduction I called him Lord Timothy Dexter. He wasn’t of course a Lord, but he wanted people to call him that. If people called him Lord he would give children some coins, or buy someone a drink.

He desperately wanted to hold a public office, however, no one thought he was competent enough to hold such a position. He was eventually given the title “the informer of deer”. His job was to keep track of the town’s deer population.

The town had no deer. It was the early American equivalent of Homer Simpson’s Bear Patrol.

He would drink and cheat on his wife, which she of course didn’t like, so he literally treated her as if she was dead. He refused to acknowledge her presence.

Later in his life, he wanted to see what his funeral would be like, so he faked his own death. He watched 400 people show up at the wake.

Later the people at the wake heard a commotion in the kitchen. It was Timothy Dexter hitting his wife with a cane because she wasn’t crying at his funeral.

I never said he was a good guy.

His plans to be buried in the large mausoleum on his estate were nixed by the city government, and he was placed in a plot in a local cemetery.

Timothy Dexter did have a lot of luck, but some of it also might have been him playing stupid to get an advantage on other traders.

But unquestionably, there was a lot of luck.

If anything, Timothy Dexter provided proof of the old adage that it is better to be lucky than good.