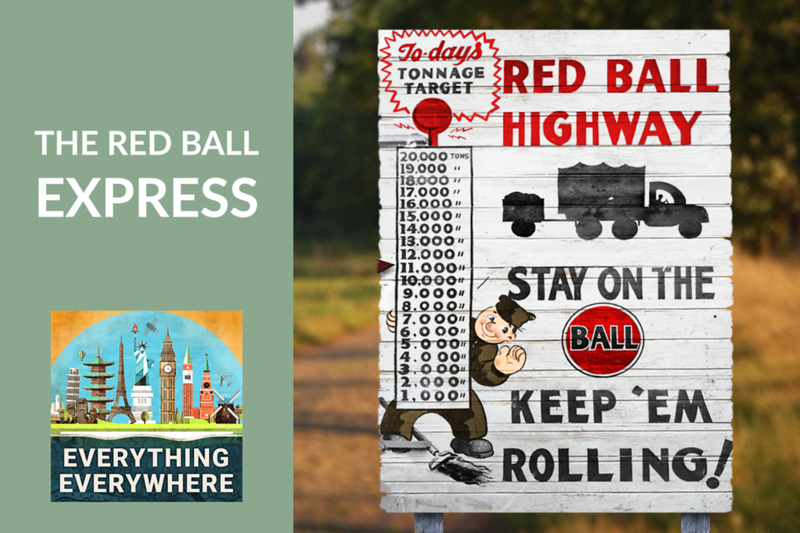 There is an old adage about warfare that says “amateurs talk about strategy, whereas professionals talk about logistics”.

There is a great deal of truth to this statement.

While history books have given a great deal of attention to the D-Day landing at Normandy, what has been almost totally ignored is the incredible logistical effort which was required after the landing.

Learn more about the Red Ball Express, one of the largest supply chain operations of World War II, on this episode of Everything Everywhere Daily.

You have stuff and you need to transport and store that stuff. You might go out your door with a water bottle, sunglasses, a smartphone, a charging cord, lip balm, tissues, and who knows what else. How are you going to manage all your stuff?

Scottevest can handle all your personal logistics. They have clothing and jackets where you can safely and securely store all of your stuff, and look good doing it.

You’ve probably seen footage of D-Day or perhaps you’ve seen a reenactment of the landings in a movie like Saving Private Ryan. On one incredible day, tens of thousands of soldiers arrived on the beaches of Normandy, France to establish a toe hold for the Allies in Europe.

Of course, the goal wasn’t just to take some beaches or even Normandy itself. The goal was retaking the entire continent of Europe.

To this extent, once the toe hold was established, the hard part started. Hundreds of thousands of people and millions of tons of supplies had to be shuttled into continental Europe.

One of the first things done after the landings were the creation of temporary harbors off of Gold and Omaha beaches. These were portable harbors called Mulberry Harbors. They were only intended to be used until the Allies could capture major French ports, and repair them from damage done by the Germans.

As temporary harbors were built, it led to an almost non-stop unloading of supplies, vehicles, equipment, and personnel.

In the first few weeks after the landing, things were going slower than anticipated. The hedgerows of Normandy made advancement very slow.  Having rented a car and driven around Normandy, I now totally understand just how difficult it was to fight in that area.

However, once they broke through the hedgerows, the fortune of the Allies suddenly changed. Then went from being behind schedule to being ahead of schedule. They managed to break out and race towards Paris much faster than expected, as the German defenses collapsed.

While this was obviously a good thing, it caused problems. Getting supplies to the front line.

Many units limited their advancement, not because of enemy resistance, but because of a lack of fuel and supplies.

If you ever watch the movie Patton, which is a great movie, by the way, there is a scene where the advancing allies had to stop because they ran out of gas.

One problem was that the Allies had previously bombed French railroad lines to prevent the Germans from resupplying their troops. That meant that when they took over the same rail lines, they had to be repaired, which would take weeks or months.

The 28 allied divisions in France consumed about 21,000 tons of supplies per day. Each day, they got further and further away from the coast, and those delivering those supplies became more difficult. Winning the war was becoming increasingly dependent on getting supplies to front-line units.

The allied command needed to do something quick to solve the transportation problem.

The solution, after a 36-hour brainstorming session, was the creation of a Red Ball Express. A red ball was a symbol used for trains carrying perishable goods which needed to be given preference. It was first used on the Santa Fe Railroad in the late 19th century.

The project was led by Brigadier General Ewart G. Plank, who was known as Little Patton. He immediately went into action. Almost 6,000 2.5 ton trucks were requisitioned to take part in the Red Ball Express. The trucks were taken from every conceivable unit which had trucks available.

They also needed to get drivers, and they needed them fast.

They recruited thousands of men to drive the trucks. Many of them didn’t even know how to drive a truck and they weren’t given more than an hour of instruction. Many drivers who never had driven a truck before reported grinding gears when they would shift because they didn’t know how to shift gears. The Army didn’t care, however. They just wanted full trucks on the road delivering supplies, and they didn’t care about gearboxes.

Approximately 75% of the men recruited to drive were African American because the military commanders didn’t trust them to be in combat units. They were often assigned to service jobs in the Quartermaster Corps. The vast majority of the men were also under the age of 24.

The Red Ball Express began on August 21, 1944. Trucks would pick up supplies at the port of Cherbourg and run them up to the staging area in Chartres just south of Paris.

The route was a one-way loop route. There was one road north and one road south. The roads were closed to civilian traffic. The round trip took approximately 54 hours.

Each truck was supposed to carry 5 tons of supplies, but they usually carried much more, sometimes more than 10. The trucks had governors which limited their speed, and the drivers would remove them. They were supposed to only drive 35 miles per hour, but they would often drive as fast as 60 miles per hour.

On the return trip, they would either be empty, or they would transport prisoners of war.

Also, the trucks were supposed to be sent in convoys of at least 5 trucks, with a jeep in the front or the back of the convoy. However, in the rush to get supplies to the front, trucks would often head out solo.

The convoys were prime targets for the Luftwaffe, so it wasn’t a risk-free assignment. However, the Allies had established air supremacy pretty early on, so the risk was mitigated. Trucks also had to run without their headlights at night for precisely this reason.

The 793rd Military Police Battalion was assigned to protect the convoy and they had guard posts along the route, and also provided assistance to trucks that had mechanical difficulties. They also enforced keeping civilian traffic off of the roads.

Their primary mission was to guard the trucks so the supplies wouldn’t wind up on the black market. The French locals were also desperate for supplies, and the Americans were more than willing to occasionally turn a blind eye to make a buck.

Each truck had 2 drivers and one of the biggest dangers was accidents and fatigue. There was almost no rest for the drivers other than when they were waiting to load or unload their cargo. They would use any opportunity possible to get some sleep.

Of the almost 6,000 trucks which took part in the Red Ball Express, almost 900 would be on the road at any given time. Approximately 12,000 tons of supplies were delivered every day.

There were tons of mechanical problems as the trucks were operated almost non-stop. Trucks overheated, they weren’t lubricated properly, and things just broke.

There were reported cases of allied units hijacking Red Ball trucks because they needed fuel and ammunition so desperately.

Eventually, the port of Antwerp was captured by the allies and they managed to make repairs to open it up to shipping. With a larger port further north, the Red Ball Express was no longer needed.

The Red Ball Express served as a useful template for other convoy missions which were needed for the rest of the war. With their experience, they were able to assemble these fleets of trucks to deliver supplies at a moment’s notice.

Perhaps it was best summed up by the man in charge of the Red Ball Express, General Plank himself.  He said,  “Let it never be said that [a lack of supplies] stopped Patton when the Germans couldn’t.”