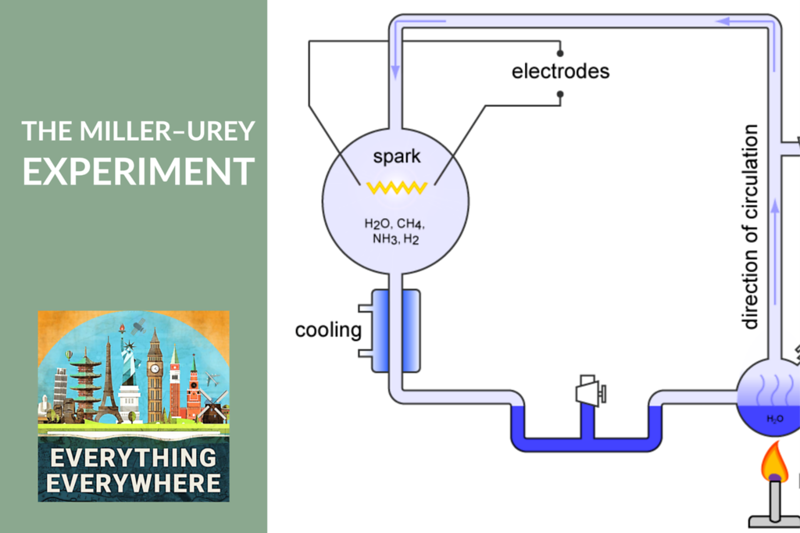 One of the fundamental questions of humanity is where did we come from? How did life on Earth come about?

While there have been many theories as to how this could have happened, in 1952, one man decided to actually run an experiment to see if they could replicate the early conditions on Earth.

The results were eye-opening.

Learn more about the Miller-Urey Experiment and how it changed our ideas on the genesis of life, on this episode of Everything Everywhere Daily.

Ever since Charles Darwin proposed the theory of natural selection, evolutionary biologists and paleontologists have gotten a better grip on how life developed on Earth.

However, there was always one nagging question: how did it all start?

There are no fossils that date back that far. In fact, if you go back 4 billion years, the Earth would be totally unrecognizable. The atmosphere wouldn’t have any oxygen in it. The would have been no biology at all because there wasn’t any life yet. The only thing there would have been is chemistry.

The metaphor which has commonly been used to describe this environment is a primordial soup. Probably water and an atmosphere of simple, common chemicals.

This transition from chemistry to biology is known as abiogenesis.

Speculation for how simple chemical compounds became the basis for more complex organic compounds, and then the building blocks for life were just that: speculation.

It happened so long ago, that there isn’t a lot of evidence one way or the other, and it isn’t something we can observe today because the Earth is so different, and today there is life everywhere.

In 1952, a 22-year-old student at the University of Chicago named Stanley Miller, proposed a rather simple experiment to see if simple chemical compounds could produce more complex organic compounds.

He and his adviser, Harold Urey, put together a sealed system of glass flasks and tubes which contained what they thought the early Earth atmosphere was like.

There were only four chemical compounds in the closed glass system: water, hydrogen, ammonia, and methane.

The water in one of the flasks would be boiled, causing the liquid water to become a gas. This was designed to mimic natural evaporation.

The water vapor was then condensed back into a liquid.

In between, there was a glass beaker the gasses passed through with two electrodes running at 60 kV. These electrodes would create electrical sparks, adding energy to the system, replicating lightning.

That was the whole experiment. The idea was to set it up, let it run, and then see what would happen.

They honestly had no clue what the results would be.

After the first day of running, the water started to turn pink.

Over the next several days, the water began to turn a deeper red and became opaque.

At the end of a week, the experiment was stopped, and they tested the water to see what was in it.

They found evidence of five different amino acids, the building blocks of proteins.

What Miller found was that with a few simple chemicals and some external energy, you can generate the building blocks of life.

This experiment ushered in the entire discipline of pre-biotic chemistry.

Because of the simplicity of the experiment, many people were able to replicate it using different base assumptions.

In 1961 Catalan researcher Joan Oró found that you could make adenine, one of the four base molecules of DNA, from hydrogen cyanide and ammonia.

A team of Czech researchers found that with just ammonia, carbon monoxide, and water they could create all the nucleobases of RNA by shooting it with powerful lasers, to replicate shock waves and plasma from early asteroid impacts.

One of the criticisms of the experiment is that over time, researchers began to believe that the gases used in Miller’s original experiment didn’t in fact represent the early atmosphere on Earth.

Miller replicated the experiment in 1983 with carbon dioxide, carbon monoxide, and nitrogen. This time nothing happened, because it made the water very acidic.

However, when that experiment was run again, this time with iron and carbonate in the water, to neutrlize the ph level, amino acids were found.

Stanley Miller kept studying pre-biotic chemistry throughout his life, conducting many different versions of his original 1952 experiment. He was able to create dozens of amino acids, and 11 of the 20 amino acids used in human biology, all from pre-biotic chemicals.

One of the interesting things which was discovered is that Miller saved the equipment from his original experiment, and the products were kept in 11 vials.

After his death, in 2007, several of his students analyzed the original results of his experiment where he found five amino acids. This time, they were able to analyze the specimens using modern techniques and they found 25 different amino acids at various concentrations.

Stanley Miller’s experiment was even more successful than he had even realized at the time.

Moreover, they found the products of an experiment he ran in 1958 where he conducted a similar experiment, but with the chemical cyanamide. He never published the results of this experiment, but they found peptides in the vials, which are strings of amino acids.

He had another 1958 experiment that used hydrogen sulfide, and he produced even more organic compounds than anything else he tried up until that point.

Almost, whenever some version of the Miller-Urey Experiment was run, researchers have been able to come up with similar results.

These laboratory results have found corroboration with other evidence as well.

In 1969, a meteor landed in Murchison, Australia that was rich in organic compounds. Over 90 different amino acids were found on the meteor, which included 19 of the 20 amino acids necessary for life on Earth.

In 2003, the simplest amino acid, glycine, was found by astronomers in three different three giant molecular clouds. While the process by which it was created isn’t known, it might have involved ice molecules, organic molecules, and strong ultraviolet radiation.

In 2009, ??NASA’s Stardust mission which actually returned a sample from a comet found amino acids.

Based on the experimental and observational evidence we have, it might not only be possible but maybe even probable, that the chemical building blocks of life could be found on Mars, Saturn’s moon Titan, and maybe even some of the moons of Jupiter.  We know that the pre-biotic chemistry is already there.

There is still a whole lot we don’t know. There is a lot that has to occur between creating amino acids and getting full-blown cellular life, but, we do at least know, in no small part to Stanley Miller’s groundbreaking experiment, that the basic building blocks of life may be relatively abundant in the universe.