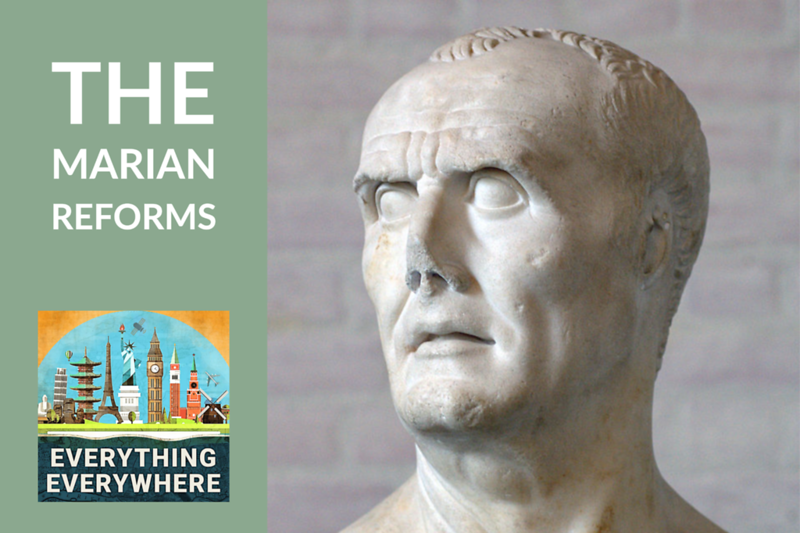 When you hear about ancient battles and wars, the stories are often dominated by famous generals whose names have come down to us through history.

In the year 107 BC, a Roman general and statesman by the name of Gaius Marius did exactly such a thing when he overhauled the Roman military.

Learn more about the Marian Reforms and how they set the stage for the Roman Empire, on this episode of Everything Everywhere Daily.

Before we get into the details about what the Marian Reforms were, we first need to understand why they were necessary.

When Rome started out, it was just a city and it controlled a small territory. As with every ancient culture, the economy was dependent on agriculture.

When wars or battles were fought, they were fought mostly with land-owning farmers. There would often literally be a season for fighting, usually in the summer, after the crops were planted and before they had to be harvested.

Moreover, the weapons and armor that a soldier would use had to be purchased by the soldier himself. The more wealthy a soldier was, the better the equipment they could afford to buy.

Roman soldiers at this time either were paid poorly or weren’t paid at all. The only compensation they received was a share of the spoils of war.

In Rome, you weren’t allowed to serve in the military unless you had money.

One of the several social divisions in Rome was based on wealth and property. How much money you had determined your position in the army.

The lowest class were the Velites. They had enough property to qualify for the military, but not enough to buy weapons or armor. They were skirmishers who would run ahead, throw spears or toss rocks with a sling and then retreat behind the infantry.

The next group and the front row of the infantry were the Hastati. They could afford a basic shield and sword and were usually the youngest, most inexperienced soldiers. They would often also have a javelin with them that they would throw before they engaged with the enemy.

Above them were the Principes. They had even better armor, usually with a helmet, and they stood behind the Hastati.

Behind them was the Triarii. They weren’t so much an economic group as they were just the most experienced soldiers. In a battle, the Hastati and the Principes would often switch places on the front line. The triarii would often never be used in a battle. They were the elite units and were the fighters of last resort.

There was a Roman saying res ad triarios venit,  which means,
‘it comes down to the triarii” which would be like saying a race was won on the last lap, or a game was won at the last seconds.

The top group with the most money was the equestrian class. They got their name from the fact that they could afford a horse. They were the cavalry in the Roman army and they usually serve on the flanks of the infantry.

The lowest class of Roman society was called the capite censi, which literally means “head count”. They didn’t have property, so in a census, they were counted by the head, not by what they owned. They were ineligible for the military.

This system of part-time armies and military service based on wealth worked fine when Rome was fighting its neighbors in Italy. They didn’t have to go far and it was easy to come back for the harvest.

However, as Rome continued to grow and conquered territories outside of Italy, the system didn’t work very well. With provinces in North Africa and the Iberian Peninsula, soldiers could potentially be gone for years.

Moreover, Roman society was becoming significantly more economically stratified with an ever-growing number of people who didn’t own property. Small landowners were being pushed out by owners of large estates.

You had fewer people who had to make bigger and bigger sacrifices, yet they had a need for more and more soldiers.

Marius was not born in Rome. He came from a family of well-off farmers and rose in the Roman hierarchy based on his performance as one of Rome’s greatest generals. He held the consulship a record seven times and was called the third founder of Rome.

He also led one of the factions in the first Roman civil war, which is a topic for a future episode.

His reforms solved most of the problems that Rome was facing and created some new ones which would be important decades later.

His first major reform was completely removing the property requirement for military service. This opened up the army to a huge pool of talent that was prevented from serving, and it would solve their problems of not having enough soldiers.

Because this group didn’t have to worry about going home to tend to the fields, the army was able to become a permanent standing army. Soldiers were recruited for a term of 16 years, which was later increased to 20 under Augustus.

They got paid during their service and at the end of their service, they would be awarded a plot of land in one of the Roman colonies. This also solved the problem of controlling the provinces. By filling them with veterans they ensured they had a population of people who could fight and that had Roman customs.

They could defend the territory and Romanize it at the same time.

What about weapons? The reason why only landowners could previously serve is that they could afford weapons and armor.

The onus of equipping an army now fell upon the general instead of the soldiers. This ensured that everyone would basically have the same equipment, rather than having soldiers with radically different equipment.

This also had a massive downside, which I’ll get to in a bit.

A standing army was also just a higher quality army. Instead of a group of soldiers who fought occasionally, you now had a group that did nothing but fight and train for years.

Roman armies also were now trained to be engineers and builders, building a new camp sometimes every night, as well as bridges, walls, and siege equipment.

Changing the property requirements was by far the biggest change, but it wasn’t close to being the only one.

Roman legions were notoriously slow because they had long baggage trains for carrying all their supplies.

Marius made the army much more mobile by requiring every soldier to carry his own gear. His weapons, armor, tent, and a few days’ rations of food had to be carried on their back.

The allowed the army to move quickly from location to location without so many pack animals. It also led to soldiers being called Marius’ mules, which is sort of the ancient equivalent of calling a solider a “grunt”.

Under this system, a Roman legion could be expected to march 20 miles in a day with a full load of gear.

Another huge reform was a change in the fundamental Roman tactical units.

The different units I described above, the hastati, principes, and triarii were all part of what was called a maniple.

The maniple system was the successor to the phalanx which the Romans originally copied from the Greeks.

The maniple simply was too inflexible and couldn’t be deployed in large numbers. It was also built around the system where everyone had different levels of armor and weapons.

Now, everyone would have the same weapons and armor, so the maniple wasn’t necessary.

So, each legion consisted of about 4,800 soldiers.

Unlike a maniple, everyone in a cohort would have the same weapons and armor. Instead of hastati and triarii, everyone was now just a legionnaire.

Because every cohort was pretty much the same, it allowed the ability to mix and match them and point them in any direction. They could fight along, or with larger groups of cohorts.

In theory, a cohort in one legion could fight with and alongside another legion they had never met before, and everyone would know what they were doing.

Marius also made modifications to one of the most basic weapons a Roman soldier had, the pilum. A pilum was a javelin with a metal point that would be thrown at the beginning of combat.

Previously, only the front line of hastati would have a pilum. Now everyone had one. Moreover, Marius changed the design such that they would easily break and bend once they hit an enemy’s shield. This was designed so that they couldn’t be thrown back at the Romans, and also, if they did hit a shield, it would render the shield more difficult to use because you had a bent piece of metal now sticking through it.

Prior to Marius, there were different animals used on a legion’s standard: an eagle, a boar, a wolf, a horse, or a minotaur.

Marius changed it so that every legion used an eagle. It was a minor reform, but it was another step towards homogenizing how legions operated.

The final reform was that any Italian who fought in a Roman legion was given Roman citizenship. Allied armies from Italy would often fight alongside Romans, and Marius found it far too confusing. By extending citizenship, it expanded the number of people who had an incentive in the success of Rome.

For the most part, these reforms were a remarkable success at least militarily speaking. The creation of a well-trained, well-equipped, permanent standing army made Rome’s military one of the most powerful in the world.

However, the move from personally acquiring weapons and armor to putting that responsibility on the general ensured that legions would become the playings of the ultra-rich. It led to an inexorable shift from part-time soldiers whose loyalty lied with the republic, to a professional class of soldiers whose loyalty lay with their general, and later, emperor.

Over the centuries, payment and support of the legions would determine who would sit on the imperial throne.

This would come to a head just a few decades later when armies loyal to Gaius Marius’s nephew, a man we know as Julius Caesar, led to the collapse of the Roman Republic.