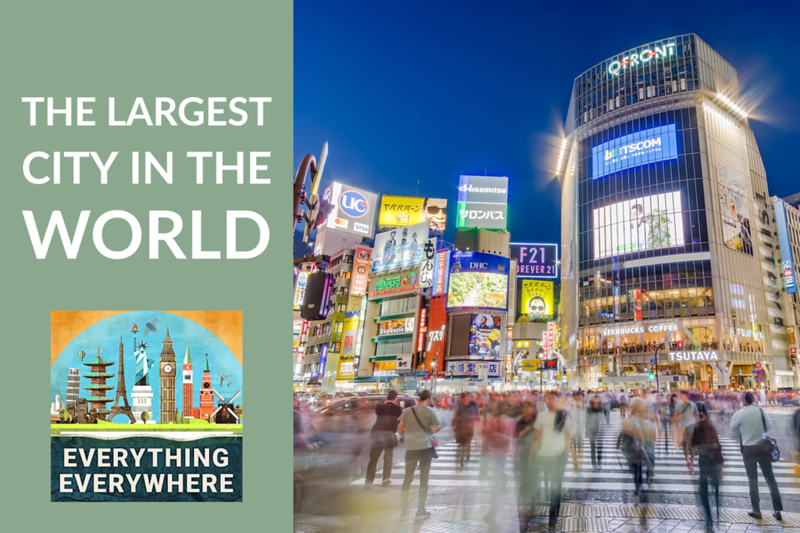 The rise of civilization is sometimes defined as the urbanization of humanity. The transition from hunter-gatherers to living in settlements was a fundamental transformation of human society and allowed for advanced social institutions such as kings, priesthoods, and standing armies.

Since then, our settlements have gotten larger and larger, resulting in the megalopolises we have today.

Learn more about the cities which held the distinction of being the largest in the world on this episode of Everything Everywhere Daily.

This episode is sponsored by rerouted.co.

After getting an extremely bad cold several years ago after hiking on a glacier in Argentina in the rain, I’ve been on the lookout for a good, insulated raincoat.

However, they aren’t cheap. I shopped around and priced out some nice jackets, but never pulled the trigger on a purchase.

Last week, finally, I got the jacket I was looking for. The best part was, I managed to get it for only a third to a quarter of the price I would have paid by buying it on rerouted.co.

Rerouted is the place to buy, sell, or donate your used outdoor gear. They make shopping for used gear as easy as shopping for new gear.

Once again, that is Rerouted.co.

As you’ll soon see, the largest city in the world was almost always a reflection of some civilization or empire at its peak. The city in question was usually, but not always, the capital of the civilization, and the city usually suffered a population decline within a century of reaching its zenith.

If you go back far enough, it becomes difficult to distinguish between what was a small settlement and what was a city. There is no hard and fast rule for what is or what is not a city, especially when we are talking about settlements from thousands of years ago.

Also, the further back we go, the more difficult it becomes to do estimates for the populations of cities. There are a few points on the timeline which are pretty obvious and there really isn’t any question as to what was the largest city, but then there are spaces in between where there is a great deal of debate.

Even today, estimating the size of cities is often guesswork. Also, for the sake of this discussion, I’ll be defining a city as a metropolitan area. One contiguous metropolitan area will be considered a single unit, even if it does happen to be divided into different political units. So, for example, Minneapolis and St. Paul, Minnesota would be a single unit by this measure, even though they are different cities with different mayors.

So with that, we might as well start with the place which is generally agreed upon to be the first city with a population of 1,000: Jericho.

Jericho is located today in Palestine along the banks of the Jericho River. It is one of the oldest continuously inhabited cities in the world and today it has a population of about 18,000.

Jericho is believed to have passed the 1,000 population threshold around the year 7,000 BC, and the city might have begun as a settlement as early as 9,000 BC.

What makes Jericho stand out is that it is the earliest known city with walls. In the ancient world, walls were what made a city. Walls offered protection and that is why most people wanted to live in the city. It was so they could live within the walls.

The next city on the list, and possibly the first city to pass a population of 10,000 was Çatalhöyük in what is modern-day Turkey.

Çatalhöyük was contemporary with Jericho but probably surpassed it in size around 6,000 BC.

From 4500 BC to about 3000 BC, the city which was considered the largest was Uruk in Iraq. Uruk was a Sumerian city located on the banks of the Euphrates River.

It had a population in the low tens of thousands for about 1,500 years.

Around 3,000 BC the next contender for the title of the largest city arose on the banks of the Nile River, the city of Memphis. It is located just south of modern-day Cairo, and it was the capital of Lower Egypt.

It had a peak population similar to Uruk and there is debate as to which was larger, but I’m sure at some point Memphis probably was a bit bigger, and besides it would be odd to exclude ancient Egypt from the list.

For the next 1,500 years, the title of the largest city is either in Egypt or the Babylonian Empire.

In Egypt, the dominant cities were Memphis, Avaris, and Thebes, and in Babylon, there were several cities with claims on the title including Ur, Lagash, Akkad, and Babylon itself.

In the year 1,500 BC Thebes unquestionably became the largest city in the world, and it might have been the first city to surpass a population of 100,000 people.

Several centuries after this, you start to see the first Chinese cities on the list: Xi’an, Haojing, Anyang, Qi, and others compete for the title as well. They all reach around the 100,000 population level.

By the year 500 BC, we are entering an age where we have a more firmly established written record of history. We aren’t quite so reliant on archeology and guesswork.

The biggest city in 500 BC was unquestionably Babylon, which was the first city to surpass a population of 200,000.

In 300 BC, the title went back to Africa to the city of Carthage in modern-day Tunisia.

It may have been the first city to surpass a population of half a million people.

By the year 100 BC, the title went back to Egypt to a city that didn’t even exist 200 years earlier: Alexandria. The city was uniquely situated on the Mediterranean Sea and in the Nile Delta, which meant it could be supplied by the fertile Nile farmlands, and trade with the rest of the world.

I’ll probably do a separate episode on Alexandria in the future, because the city’s story is so fascinating.

The city which most people think is the first one to pass a population of a million people was Rome, around the year 1.

Rome at this point was at the beginning of the Imperial Period. It had a large empire and much of that was used to send food and goods to supply Rome.

A city of this size at this time was highly unnatural and it took all of the power of the Roman empire to sustain it.

Rome stayed on top for several centuries, until about the year 400. During this time it shrunk in size down to about 700,000, but it was still bigger than anything else.

Around the year 500, the torch was passed to the other side of the Roman empire to Constantinople. While smaller than Rome, the capital of the Byzantines was the largest city until about the year 700.

Then it definitely moves back to China to the city of Chang’an.

Chang’an was the capital of China at the time and was the capital for several dynasties. It approached a population of 1,000,000, but never quite surpassed Rome at its peak.

During this time Islam exploded onto the world stage and by the year 900, the Abbasid Caliphate’s capital in Baghdad became the largest city in the world.

Baghdad’s reign lasted until about the year 1200 when it went back to China for an extended run.

In 1200, Hangzhou may have had a population that approached a million people.

In 1400, the new Chinese capital of Nanjing became the largest city in the world, which then passed the baton to the even newer capital of Beijing around 1500.

Beijing held the distinction of being the largest city in the world for over 250 years, until the early 19th century.

Up until this point, it is doubtful if any city surpassed Rome in size. Maybe some of the Chinese capitals came close to equaling Rome, but if so, they wouldn’t have surpassed it by much. China had many large cities, whereas the Roman Empire really had all its eggs in one big basket.

The first city we can say without question which had a larger population than Rome was London. Around 1825, London became the largest city in the world and held that title for a century.

By the year 1925, metro London had a population of seven and a half million people.

In 1965, the largest city in the world title passed to Tokyo, which still holds it today.

The future, however, might see more changes to the title of the biggest city in the world.

The population of Japan is shrinking. Even if more people move into the Tokyo region, it would probably only be enough to keep the population stable.

You might have noticed that there was one country conspicuously absent from the list: India. While India has had some historically big cities, they’ve never had the biggest at any given time.

However, by 2050, it is predicted that the largest city in the world with a population of 42 million will be Mumbai, with Delhi at number two, where it is today.

Birth rates are currently dropping all around the world to at or below replacement levels. The only current exception to this is in sub-Saharan Africa.

Depending on what happens to demographics between now and then, and a whole lot can happen, some projections have the largest city in the world in the year 2100 being Lagos, Nigeria with a population of over 88 million people.