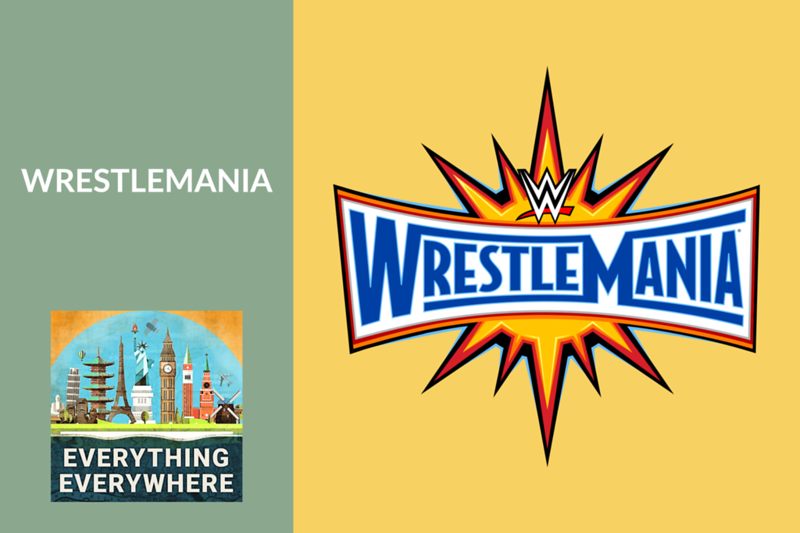 Every year, around this time, one of the largest entertainment events is held. Wrestlemania.

However, this isn’t just a wrestling show. How it came about is a story of business consolidation, modern media, and celebrity culture.

Even if you aren’t a fan of professional wrestling, the story behind the business of Wrestlemania is fascinating.

Learn more about Wrestlemania on this episode of Everything Everywhere Daily.

My audiobook recommendation today is We Promised You a Great Main Event: An Unauthorized WWE History by Bill Hanstock.

WWE is an extraordinary business success and an underappreciated pop-culture phenomenon. While WWE soared to prominence during the Hulk Hogan years, as the stakes grew more and more extreme, wrestlers faced steroid scandals and assault allegations. The whole story is here, good, bad, and ugly, from the heights of iconic cultural moments like Wrestlemania III to the arrival of global superstars like The Rock and John Cena.

We Promised You a Great Main Event is an exhaustive, fun account of the McMahon family and WWE’s unprecedented rise.

First, I would like to wish everyone a happy Wrestlemania. The time of year when friends and family gather around the television to celebrate body slams, dropkicks, and pile drivers. A time when champions are crowned, new feuds are ignited, and where B list celebrities make appearances to revive their stagnant careers.

However, it’s much more than that. It is usually one of the single biggest in-person events to take place in the United States. It has a larger attendance than the Super Bowl almost every year for the simple reason that they can put fans on the field, in addition to the stands.

Cities compete to host Wrestlemania just like they do other major sporting events because it can have as much as a $170 million dollar impact on the host city.

Forbes has ranked Wrestlemania as the 5th most valuable sporting event in the world, behind the Super Bowl, the FIFA men’s world cup, and the summer and winter Olympics.

So, how did Wrestlemania come about?

To understand this, you need to understand the history of the wrestling business, because Wrestlemania really the antithesis of everything which professional wrestling stood for, for decades.

If you remember way back to my episode on kayfabe, professional wrestling got its start doing legitimate wrestling matches at carnivals and fairs.

These were real grappling exhibitions, and they were, for the most part, boring.

They soon realized that they could make more money by fixing the results, and thus, pro wrestling was born.

Eventually, wrestling promotions arose, but they all had a very regional focus. A promotion might only cover part of a state, in the case of Texas, or several states, in the case of the American Wrestling Association.

In 1948 the National Wrestling Alliance or NWA was formed. This was a consortium of the owners of the various regional promoters which worked together to select a world champion and to protect each other’s territories.

There were about two dozen territories across the United States and Canada in the 1950s.

It was in the early and mid-1950s that wrestling became a really big draw for the new medium of television. Every network has wrestling programming on until it became over-saturated and the shows were removed.

The NWA was a very conservative organization, which was more concerned with protecting everyone’s territory than it was with growing and innovating.

Two of the largest wrestling promotions left the NWA in the 1960s. The American Wrestling Alliance, which was based in the upper midwest, and the World Wide Wrestling Federation, or the WWWF, which was located in the northeastern United States.

Originally founded as the Capital Wrestling Company by Jess McMahon in 1953, it was passed down to his son Vincent J. McMahon who changed the name to the WWWF.

The NWA and the regional system of wrestling continued into the 1970s and were able to prosper because of the media technology at the time.

There was no easy way for wrestling fans to communicate with each other, so most people were ignorant of what happened another promotion. Only serious hardcore fans who subscribed to wrestling magazines would know what was happening, and even then it could be months or weeks after a match took place before they would know the results.

Television at this time was also basically just three major networks. Most wrestling appeared on television via syndication on local TV stations, which reinforced the regional system. Someone in Omaha would see totally different wrestling than someone in Memphis would.

The thing which changed the professional wrestling business forever took place in 1982, when Vincent J. McMahon sold the WWWF to his son, Vincent Kennedy McMahon, aka the current CEO of the company, Vince McMahon.

Vince realized the potential in destroying the regional wrestling system. One of the first things he did after taking control was leaving the NWA, which the WWWF had rejoined in 1971, and changed the name of the company to the World Wrestling Federation, or WWF.

Vince began buying syndicated TV programming nationwide, which angered many of the regional promotions. While there was nothing illegal about it, there has been an understanding for decades that this just wasn’t supposed to be done.

He used the revenue from this larger television audience to begin poaching all of the top talent from the various regional promotions.

In 1984, he hired a wrestler named Hulk Hogan, who was the top wrestler for the AWA, and who had also appeared in the movie Rocky III.

McMahon himself explained the strategy in an interview with Sports Illustrated when he said:

In the old days, there were wrestling fiefdoms all over the country, each with its own little lord in charge. Each little lord respected the rights of his neighboring little lord. No takeovers or raids were allowed. There were maybe 30 of these tiny kingdoms in the U.S. and if I hadn’t bought out my dad, there would still be 30 of them, fragmented and struggling. I, of course, had no allegiance to those little lords.

The WWF also began a nationwide touring schedule with far larger, more expensive stage production than any other promotion, which just rubbed salt into the wounds of the regional promotions.

The WWF was making a lot more money than any other wrestling company and had a much larger audience, but they were also burning through a lot of cash.

In many markets, their presence was resented because they caused several regional promotions to go out of business.

The WWF was teetering on the brink of bankruptcy

The thing that would make or break the business was a giant promotion that would be sold on close circuit TV. The name of the show was dubbed by their ring announced Howard Finkel. It was called Wrestlemania.

There had been other big super shows before, however, they were just wrestling shows.

Wrestlemania was to be a mix of wrestling and pop culture. The WWF had programming on MTV. Cindy Lauper, who had been working with the WWF was on the show. They got Mr. T to take part in the main event with Hulk Hogan. Mohammed Ali was a guest referee. New York Yankees manager Billy Martin was a ring announcer, and Liberace was a guest timekeeper.

The event was a huge success. Over a million people watched it on the closed circuit making it the largest pay-per-view in history at the time.  The company made $3.8 million dollars, which made the company solvent.

Wrestlemania became an annual event and quickly grew in size. Wrestlemania III in 1997 was held in the Pontiac Silverdome in Detroit and had an attendance of 93,173, which was the largest indoor event in history at that point.

2021 marks the 37th Wrestlemania.  In 2020, because they couldn’t hold a live event with spectators, Wrestlemania was held in a studio over 2 days with no fans.

Wrestlemania is now a week-long event, complete with a hall of fame induction ceremony and a fan fest.

Many other independent wrestling promotions will host shows in the town that Wrestlemania is in during the same week as the town will be full of wrestling fans anyhow.

A modern non-pandemic can make up to $40 million dollars.

So, whether you call it “The Grandest Stage of Them All”, “The Showcase of the Immortals”, “The Greatest Spectacle in Sports Entertainment”, or “The Granddaddy of Them All”, Wrestlemania is one of the biggest not quite sporting events in the world today.