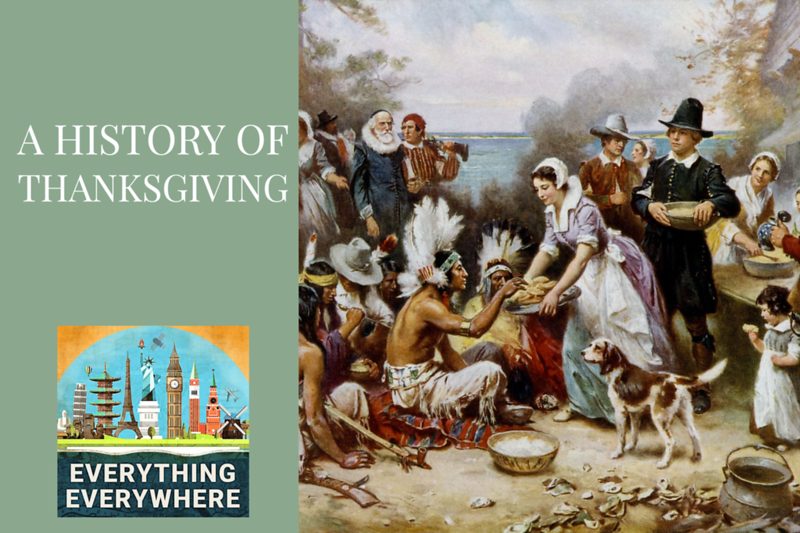 On the fourth Thursday in November every year, American’s celebrate the holiday of Thanksgiving. It is a holiday that originated in the Americas but has subsequently spread to many countries around the world.

It is a holiday that is actually secular, but with some religious overtones, and has a unique set of traditions that aren’t really shared with any other holiday.

Learn more about the history and traditions of Thanksgiving on this episode of Everything Everywhere Daily.

This episode is sponsored by Audible.

My audiobook recommendation today is This Land Is Their Land: The Wampanoag Indians, Plymouth Colony, and the Troubled History of Thanksgiving by David J. Silverman.

In March 1621, when Plymouth’s survival was hanging in the balance, the Wampanoag chief and Plymouth’s governor, declared their people’s friendship for each other and a commitment to mutual defense. Later that autumn, the English gathered their first successful harvest and lifted the specter of starvation.

Tradition tells us that the first Thanksgiving was held in 1621 when the pilgrims who lived in Plymouth Colony Massachuttes held a feast of thanksgiving with a group of local Indians. There were turkeys, and of course, the pilgrims had big hats with buckles on them, and everyone lived happily ever after.

As is so often the case with historical legends, there is often a kernel of truth, with a whole lot of embellishment which accrued over the years.

So with that, let’s try to unpack the truth about the holiday we call Thanksgiving and the traditions behind it.

There were recorded celebrations of thanksgiving in Virginia in 1607 and the Spanish settlement of Saint Augustine Florida in 1565. There is even a story of explorer Martin Frobisher celebrating a thanksgiving on Baffin island in the far north of Canada in 1579.

Not only that, but the 1621 feast held by the pilgrims was never called a thanksgiving in any of the accounts of the event. In fact, this first thanksgiving that we have built up so much of our mythology around was barely given a mention in the written accounts of the colony.

Here is one of the only accounts of what we call the first thanksgiving by Edward Winslow, who was one of the Mayflower pilgrims.

Our harvest being gotten in, our governor sent four men on fowling, that so we might after a special manner rejoice together after we had gathered the fruits of our labor. They four in one day killed as much fowl as, with a little help beside, served the company almost a week. At which time, amongst other recreations, we exercised our arms, many of the Indians coming amongst us, and among the rest their greatest king Massasoit, with some ninety men, whom for three days we entertained and feasted, and they went out and killed five deer, which we brought to the plantation and bestowed on our governor, and upon the captain and others. And although it be not always so plentiful as it was at this time with us, yet by the goodness of God, we are so far from want that we often wish you, partakers of our plenty.

It was really more of a harvest festival than it was a thanksgiving.

Moreover, it wasn’t the lovefest between pilgrims and the natives which it has been made out to be. The pilgrim’s population was devastated by their first year in America, and the Wampanoag tribe had been likewise devastated by a plague.

The people who participated in this feast were survivors.

The Wampanoag were on such good terms with the English because their chief had negotiated an exclusive trade deal with them. That gave him a ton of leverage with the other tribes in the region because he was the exclusive source of goods that the English would use for trade.

Within a generation, things between the tribe and the English went pear-shaped. Massasoit’s son Metacomet became chief, who the English called King Phillip, and the alliance broke down into what was called King Philip’s War. However, I’m going to leave that topic for a future episode.

While there may have been individual feasts of thanksgiving, the creation of it as an organized holiday didn’t occur until after the completion of the Revolutionary War.

The first Continental Congresses issued a proclamation for a national day of Thanksgiving after the victory at the Battle of Saratoga in 1777, and they continued to issue annual “national days of prayer, humiliation, and thanksgiving”. This trend continued through the presidencies of Washington and Adams and then stopped under Jefferson.

Jefferson believed that it was a violation of the separation of church and state, and so never issued the proclamation for a day of thanksgiving.

After Jefferson, the tradition of a day of thanksgiving was on and off for decades.

In 1827, a woman by the name of  Sarah Josepha Hale wrote a series of editorials trying to pursue the president to declare a national day of thanksgiving. Sarah Hale was, coincidently, the author of “Mary Had A Little Lamb”.

After appealing to 13 different administrations, she failed to get any president to act. Finally, 36 years after she started, Abraham Lincoln agreed, and on the last Thursday in November 1863, he declared Thanksgiving, and we have been celebrating it on that day ever since.

In 1939 Franklin Roosevelt tried to move Thanksgiving up a week, and it was met with great opposition. In 1941, the holiday was permanently set as the fourth Thursday in November.

Thanksgiving has a lot of traditions and things associated with it. Where did they come from?

For starters, what is the deal with turkey? There is probably nothing which is so identified with the holiday.

The Pilgrims most certainly did eat turkey, but there was nothing special about it. It wasn’t the center of a meal.  The journal entries from the Plymouth colony show them eating pretty much everything, including geese, ducks, swans, lobster, deer, fish, oysters, eels, and of course, turkey.  One thing which was probably a staple food that no one serves today is passenger pigeon because they are extinct.

The vast majority of turkeys consumed in the US are consumed around Thanksgiving, although that number has gone down as more people are eating turkey slices or ground turkey all year round.

Why did turkeys become so popular and associated with Thanksgiving? It really has to do with the fact that they are native to North America and they are large. If you are having a big feast, a turkey is large enough to feed all of your guests. Moreover, because Thanksgiving is held in the fall, it’s easier to eat them at that time of year rather than feed the birds through the winter.

The first frozen TV dinner was designed to be a Thanksgiving turkey dinner. It was created by the Swanson company in 1954 after they massively overestimated the demand for turkey in 1953.

Did pilgrims really have giant hats with buckles on them? The answer is no, simply because those hats didn’t come into fashion until several decades later. When they came into fashion some were certainly brought over the American from England, but it was well after the events of the supposed first Thanksgiving.

Football is a tradition on Thanksgiving day. It used to be played at all levels including high school and college, but it is only played on Thanksgiving by the NFL now. They played their first thanksgiving game in 1920. The Detroit Lions have played every Thanksgiving since 1934 and the Dallas Cowboys have been playing on thanksgivings since 1966.

Parades have been a tradition for over 100 years. Many cities have them including Detroit, Philadelphia, and most famously, New York. Most of them were originally sponsored by department stores as a promotion going into the Christmas season. Today, Macy’s in New York is one of the last stores to still sponsor a parade.

The Macy’s parade balloons were introduced in 1928 to replace zoo animals which were the original parade attraction.

Since 1947 the National Turkey Federation has given turkeys to the White House. John F. Kennedy was the first president to spare the turkey, and Ronald Reagan was the first to issue a pardon to the turkey in 1987.

As much as Thanksgiving is associated with the United States, it is not an exclusively American holiday. Canada celebrates Thanksgiving in October. Many of their traditions came from loyalist Americans to left for Canada after the Revolution.

In Norfolk Island, Australia, it is celebrated and it was brought there by American whaling ships in the 19th century.

Japan has a thanksgiving, which was adopted during the American occupation after WWII. I was in Tokyo during Thanksgiving where I couldn’t find a hotel room in the entire city one weekend.

It is also celebrated in Libera, particularly by the Amero-Liberian population who are the descendants of freed slaves to migrated there.

Thanksgiving is a really unique holiday. It isn’t explicitly a Christian religious holiday like Christmas or Easter. Nor is it an explicitly nationalistic holiday like Independence Day or Memorial Day. It also isn’t tied to a single person like President’s Day or Martin Luther King Day.

So even if many of the traditions may not be rooted in fact, Thanksgiving is still a uniquely American holiday.

Executive Producer of Everything Everywhere Daily is Jame Makkala.

The associate Producer is Thor Thomsen.

Francis Tapon writes: “Great snippets of random information that is fascinating and educational. Gary does a great job!”

Chris Lesch writes: “Fantastic Podcast that is full of general history and facts. I love that the topics are so wide-ranging from that of the Roman Empire to the creation of the GPS system.”

Thank you very much, Francis and Chris. Remember if you leave a five-star review, you too can have your review read on the podcast.