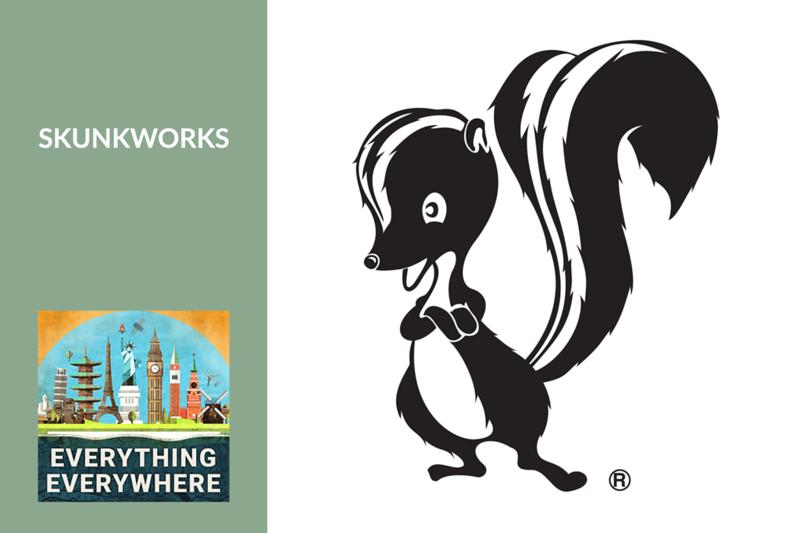 62 miles north of Los Angeles in the city of Palmdale, California, lies one of the most secretive aircraft design and production centers in the world: Lockheed Martin’s Advanced Development Program.

From this location, some of the most famous and important military aircraft in the 20th and 21st centuries were created….and they are still working on new aircraft today.

Learn more about Skunkworks, one of the world’s most secretive design facilities for over 75 years, on this episode of Everything Everywhere Daily.

My audiobook recommendation today is Skunk Works: A Personal Memoir of My Years of Lockheed by Ben R. Rich and Leo Janos

From the development of the U-2 to the Stealth fighter, the never-before-told story behind America’s high-stakes quest to dominate the skies. Skunk Works is the true story of America’s most secret and successful aerospace operation. As recounted by Ben Rich, the operation’s brilliant boss for nearly two decades, the chronicle of Lockheed’s legendary Skunk Works is a drama of Cold War confrontations and Gulf War air combat, of extraordinary feats of engineering and human achievement against fantastic odds.

Here are up-close portraits of the maverick band of scientists and engineers who made the Skunk Works so renowned. Filled with telling personal anecdotes and high adventure, with narratives from the CIA and from air force pilots who flew the many classified, risky missions, this book is a riveting portrait of the most spectacular aviation triumphs of the 20th century.

The history the Lockheed Skunkworks has two different starting points.

They created the Lockheed P-38 Lightning. Lockheed took their engineers and physically separated them from the rest of the company to work on the project. No one else knew what they were working on.

The plane had a very distinct look with two booms and two tails. They also integrated several unique features which were seen for the first time in combat aircraft, including flushed rivets to help reduce aerodynamic drag.

The more formal beginning of the Skunkworks project was in 1943.

Germany had created the Messerschmitt Me 262 which was the world’s first jet fighter. The plane was far and away more advanced than anything the allies had. It was the fastest fighter aircraft ever and it was over 100 mph faster than the fastest allied aircraft.

Thankfully, the Germans never created many of them, but the jet engine was a huge technical advantage over anything the allies had.

The United States Army came to Lockheed and asked them if they could develop a jet aircraft that could counter the threat of the German jet fighters.

An engineer named Clarence “Kelly” Johnson took a team of hand-picked engineers and, as they did in 1939, separated themselves from the rest of the company and went to work. They were literally working in a rented circus tent because there was no space elsewhere in the Lockheed facilities.

In just 143 days, they had completely designed and built the first versions of the XP-80 Shooting Star. They did almost all of the project without a contract, on a handshake deal with the government.

It was America’s first jet fighter and it saw service through the Korean War.

“Kelly” Johnson’s approach in building a new aircraft in just under 5 months was revolutionary.

The name skunkworks came about by accident. There was an engineer working on the XP-80 team named Irv Culver. He was a fan of the Lil’ Abner comic strip.

In the comic, there was a hidden place deep in the woods called the “skonk works” which was where they brewed a strong alcoholic beverage.

During the program, it was so secret that everyone was careful how they answered the phone. Culver would answer the phone by saying, Skonk Works, inside man Culver speaking.”

Today the name is an actual registered trademark of Lockheed-Martin and the Skunkworks facility has its own skunk-based logo.

The Skunkworks group soon became a permanent part of the company. They worked on government projects, almost always for the American military, which involved cutting-edge technology and engineering. For the entirety of the Cold War, the Skunkworks facility was located in Burbank, California next to the Burbank Airport.

Just to be absolutely clear, Skunkworks is not Area 51. You can drive to the Skunkworks facility in California, whereas you can’t get anywhere near the Groom Lake Facility in Nevada, aka Area 51, which I’ll be doing an episode on in the future.

What exactly did they do at this facility since the end of World War II?

Well, what they developed and built is basically a whos who of American Military Aircraft.

In 1954 they were given a contract from the CIA to build a high-altitude spy plane.  What they created was the U-2 spy plane.

The U-2 had its first test flight in 1955 and it flew in regular service for decades. Its primary defense mechanism against surface-to-air missiles was to just fly extremely high in the air. The U-2 could operate at 70,000 feet, which is twice the altitude of a commercial passenger jet.

A U-2 was famously shot down in 1960 over the Soviet Union and the pilot, Francis Gary Powers was captured and was subject to a show trial in Moscow.

There was a second U-2 shot down during the Cuban Missle Crisis as well. However, the plane, believe it or not, is still in service and they were manufactured until 1989.

Spy satellites replaced them for remote viewing over the Soviet Union, but they continued in use elsewhere in the world and it is still used today.

They knew the U-2 would have a limited life, so the next spy plane they build was the Lockheed A-12. This was first flown in 1962, and it had a very short life. By the way, the A-12 is one of the things that Elon Musks’ child was named after in the crazy unpronounceable name he gave it.

It was replaced by the SR-71 Blackbird. The fastest plane in history. I’ve previously done an entire episode on the SR-71 so I’m not going to spend too much time on it, but to say it solved the problems of the U-2 spyplane by just flying faster than anything that could possibly catch it.

It flew from New York to London in 1 hour 54 minutes, and that included inflight refueling.

In the 50’s they also developed and produced the F-104 Starfighter. This was the first fighter aircraft that could hit Mach 2 and over 2,500 of them were produced, mostly for use during the Vietnam War.

In the 1970s a new type of aircraft was commissioned. Instead of flying fast and high, the new goal was to not be seen by enemy radar. This was called stealth.

In 1976, the Skunkworks facility began work on technical demonstrations for the US Air Force. They had something ready in just 18 months and that became the basis for the F-117 Stealth Fighter which began construction in 1978. Although it was called the Stealth Fighter, it was actually just used for ground attacks.

Its first flight took place in 1981 at Groom Lake and it was operational in 1983. However, its existence was kept secret until 1988, when it was finally revealed to the public.

It was never used that widely, and its most famous usage was in 1991 during the Iraq War. Its primary mission was in a first wave sortie into heavily defended air space to take out radar and anti-aircraft installations.

There are still a few F117’s in service today, although they are not regularly used.

Going into the 21st century, Skunkworks has done a significant amount of development into unmanned aerial vehicles, or UAV’s or more commonly known as drones.

They developed the RQ-170 Sentinel which is a stealth reconnaissance drone. It saw extensive use in Afghanistan and was nicked named the “The Beast of Kandahar” after a photo of it was leaked before it became public.

They also created the Desert Hawk and Desert Hawk III drones. These are very small drones made out of lightweight foam and it is designed to be launched and used by ground forces. They are literally launched with a bungee cord and they weigh only 8 pounds with all its equipment.   Several hundred of them are in use by the British Military.

Skunkworks is still in operation today and they are still working on cutting-edge designs.

They are developing a successor to the SR-71 Blackbird called the SR-72. It is designed to fly twice as fast as the SR-71, at Mach 6 and it will use an innovative new scramjet engine.

They have also worked on non-aircraft projects including a fusion reactor, and a stealth ship known as the Sea Shadow.

Over the years the Skunkworks facility has been one of the most recognized and awarded aeronautical facilities in the world. It has received 8 Collier Trophies which are awarded annually by the National Aeronautic Association for the greatest achievement in aeronautics or astronautics in America during the preceding year.

They’ve won the National Medal of Technology & Innovation in 2007, and in 2009 the program was admitted to the International Air & Space Hall of Fame.

Today, the term skunkworks is used generally for any project where a company sequesters a team to work on a special or secret project.

The biggest lessons from the Skunkworks program aren’t the aircraft they developed, it was their ability to go from idea to creation, for brand new aircraft, in such a short period of time.

Besides, it is entirely possible that their greatest creations are things we don’t even know about.

Today’s review comes from listener TShaneRogers over at Apple Podcasts. They write:

If you’re a fan of lifelong learning, this podcast will quickly become an indispensable part of your daily routine. The sheer amount of information conveyed is awe-inspiring, yet it never becomes pedantic or boring. So glad I found this show!

Thanks, TShane! Lifelong learning is really the thing that I think separates people. Hopefully, this podcast can be used to get more people curious about the world around them.