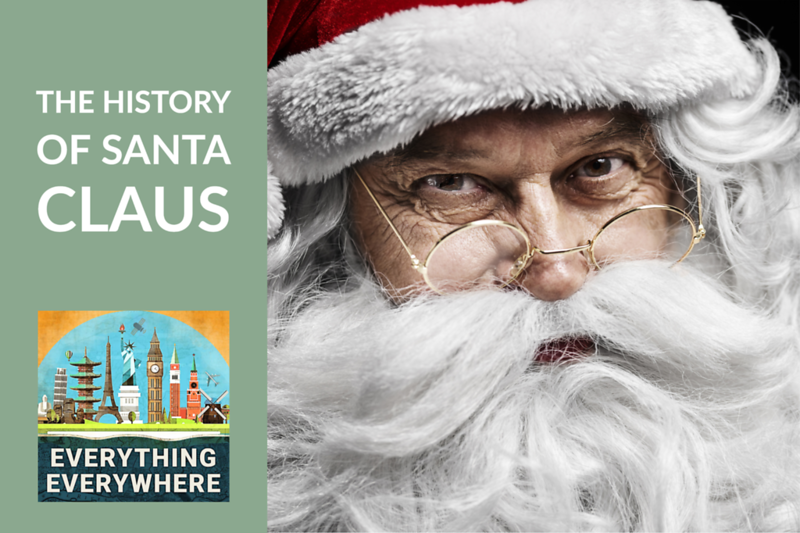 If you think of Santa, you probably have a very firm idea of what he looks like, but how did this identity get developed? And where did all the lore around him come from?

Learn more about the history of Santa Claus and how his legend came to be, on this episode of Everything Everywhere Daily.

My audiobook recommendation today is The Santa Claus Man: The Rise and Fall of a Jazz Age Con Man and the Invention of Christmas in New York by Alex Palmer

Before the charismatic John Duval Gluck, Jr., came along, letters from New York City children to Santa Claus were destroyed, unopened, by the US Post Office. Gluck saw an opportunity and created the Santa Claus Association. The effort delighted the public, and for 15 years money and gifts flowed to the only group authorized to answer Santa’s mail. Gluck became a Jazz Age celebrity, rubbing shoulders with the era’s movie stars and politicians, and even planned to erect a vast Santa Claus monument in the center of Manhattan – until Gotham’s crusading charity commissioner discovered some dark secrets in Santa’s workshop.

The rise and fall of the Santa Claus Association is a caper both heartwarming and hard-boiled, involving stolen art, phony Boy Scouts, a kidnapping, pursuit by the FBI, a Coney Island bullfight, and above all, the thrills and dangers of a wild imagination.

If you remember back, not very long ago, I did an episode on Saint Nicholas. That episode focused on the actual saint and I left the development of the modern version of Santa Claus to another episode.

This is that episode.

In Dutch, Saint Nicholas was known as Sint Nikolaas, which became shortened to Sinter Klaas.

Sinter Klaas was depicted as an old man with white hair and a white beard who lived in Spain and dressed in a red bishop’s outfit.

Over in England, there was a fictional person named Father Christmas who was supposed to embody the spirit of Christmas.

Also, the Protestant Reformation removed the celebration of saints days in many protestant countries and many of the celebrations of Saint Nicholas Day were moved to Christmas which was in the same month.

It was in this environment that the Dutch and English traditions mingled in early 19th century America, in particular in New York and New England.

The first step from Saint Nicholas to Santa Claus can probably be attributed to the 1809 book written by Washington Irving, A History of New York.

Irving actually wrote the book as a parody of the New York Dutch. In the book, he used the Anglicized Santa Claus, instead of the Dutch Sinter Klaas. This wasn’t the first use of the term Santa Claus as it had appeared in print about 35 years earlier.

In addition to popularizing the name Santa Claus, Irving also made him a more secular character from Sinter Klaas. He was no longer portrayed as a bishop, but rather as a Dutch Sailor.

In 1821 a children’s book was published called A New-year’s present, to the little ones from five to twelve. In it was an anonymously written poem titled Old Santeclaus with Much Delight.

This was noteworthy for being the first depiction of Santa Claus visiting houses on Christmas Eve, and having a sled pulled by a reindeer. Although in this imaging of Santa, there was only one reindeer.

What really cemented Santa Claus into the popular imagination, however, was the 1822 poem, “A Visit From Saint Nicholas”, which most people know today as “The Night Before Christmas”.

The poem was originally written anonymously, but Clement Clarke Moore later claimed credit 15 years after it was published.  There has been some controversy about the authorship of the piece and some scholars attribute it to Major Henry Livingston Jr.

Either way, the poem created the rough outline of the Santa that we know today. The fact that the poem is still read today is an indication of just how much it cemented Santa Claus into popular consciousness.

In this poem Santa was given the following attributes:

Pretty much everything in the poem describes the idea of Santa Claus we have today.

The name Santa Claus was well in use before the Civil War, but there were regional variations. One of which was calling him “Kris Kringle”, which appears to be the variant used in Pennsylvania.  A kringle is a pastry that comes from northern Europe. They are often like a pretzel, or circular.

Kringles are popular where I live during Christmas and are the official pastry in the State of Wisconsin.

The next big advance in the Santa Claus mythology came from the famous American cartoonist Thomas Nast.

His first illustration of Santa appeared in the January 3, 1863, edition of Harpers Weekly. In the black and white drawing, Santa is on his sled, pulled by reindeer, and he appears to be dressed in an outfit of the American flag. The jacket is the stars, and the pants are the stripes.

He is delivering presents to a camp full of soldiers during the Civil War, which explains the flag outfit.

Nast kept drawing illustrations of Santa over the years and in 1869 a collection of his images was published along with a poem titled “Santa Claus and His Works” by George P. Webster.

It was this poem that added the detail that Santa lived at the North Pole.

The idea of Mrs. Claus likewise solidified over time. Once you had Santa, it wasn’t much of a stretch to have him be married.

The first reference to Mrs. Claus appeared in 1849, again in a poem, and then appeared here and there over the next few decades, mostly just as a mention that Santa had a wife.

In the 1878 poem “Lill’s Travels in Santa Claus Land”, Mrs. Claus is assigned with the duty of keeping the ledger of naughty and nice children.

Her appearance has almost always been described as analogous to Santa: older, with white hair, and slightly overweight. Until television specials, she was never given a first name. However, the Rankin Bass TV shows gave her the name, Jessica.

I should make mention of the  September 21, 1897, edition of the New York Sun. In it was an editorial that subsequently became the most reprinted newspaper editorial in history.

It was there that an eight-year-old Virginia O’Hanlon wrote to the newspaper asking,

DEAR EDITOR: I am 8 years old.

Some of my little friends say there is no Santa Claus.

Please tell me the truth; is there a Santa Claus?

While much of the Santa mythos had been set by this point, what really took Santa to the next level was his use in advertisements. In particular, the image of Santa used by the Coca-Cola company started in the 1930s.

There is an urban myth that has spread that says Coca-Cola invented Santa, and this is categorically not true, as is evidenced by everything I’ve just mentioned.

While Coke certainly did popularize Santa, they weren’t even the first soft drink manufacturer to use Santa in an advertisement. A company called White Rock Beverages used Santa in 1915 to sell mineral water.

Nonetheless, the Coke advertisements really entrenched Santa’s popularity as the images were often in full color in magazines. Pepsi also used Santa in advertising as well in the 30s and 40s. The main thing the Coke ads did was cement the association of the colors red and white with Santa. They had been used before, but other colors such as green were used as well.

Howard is notable for founding the Charles W. Howard Santa Claus School in 1937. The school is still in operation today in Midland, Michigan and about 300 Santas attend the school every year.

There were several other small additions to the Santa story which were added in the 20th century.

One was the association of elves with Santa who make the toys in his workshop. The stories arose spontaneously in the early 20th century to explain where all the toys came from, as one person making so many toys in his workshop no longer made sense. Instead of elves, they were sometimes called gnomes.

Another was an official system for handling letters written to Santa Claus. This actually began in 1912 at the Midtown Manhattan Post office in New York, and it has been a system-wide program since 1940. Letters are often routed to various non-profits.

The US postal system can actually postmark letters as having come from the North Pole if you send them to North Pole, Alaska, which is a real town outside of Fairbanks.

There are countries around the world that have similar postal arrangements for whatever their version of Santa Claus is.

The big addition in the 20th century was the addition of a 9th reindeer, Rudolph.

The story of Rudolph the Red Nosed Reindeer appeared in 1939 by Robert L. May who wrote a short story for the Montgomery Ward department store. The story was written as a poem with the same meter as “A Night Before Christmas”

At first, the story was rejected because having a red nose was a sign of alcoholism at the time.

The story of Rudolph really became popular with the song written in 1949 by Rober May’s brother in law Johnny Marks. The first recording of the song was sung by Gene Autry and it hit number 1 on the charts for Christmas that year.

The Rudolph story and song are one of the only elements of the Santa story which are actually copyrighted and trademarked.

The North American Aerospace Defense Command or NORAD, which is responsible for detecting incoming nuclear attacks began tracking Santa in 1955.

They actually took over a tradition that began in World War II when General Dwight Eisenhower’s staff issued a press release indicating that North Pole command had been formed with Santa Claus overseeing operations.

NORAD now offers a simulated tracking of Santa’s sleigh, which is often replaced by local news stations and meteorological services.

In the later part of the 20th century until today, there have been countless different depictions of Santa Claus in different forms of media. Because no one owns any intellectual property associated with the character Santa Claus, people have been free to use him in almost every way imaginable, including negative depictions as a serial killer and an alcoholic.

Whatever artistic license people might take with Santa, the classic image we have primarily comes from a poem written for children almost 200 years ago.

Today’s review comes from listener Ian Jurgens over at PodcatAddict. They write:

Wonderful podcast. Nice and digestible for history fans. A lot of info packed into a short amount of time.

Thank you, Ian. Just to let you know, I have it from an inside source that a five-star review is guaranteed to keep you off the naughty list for the next year.