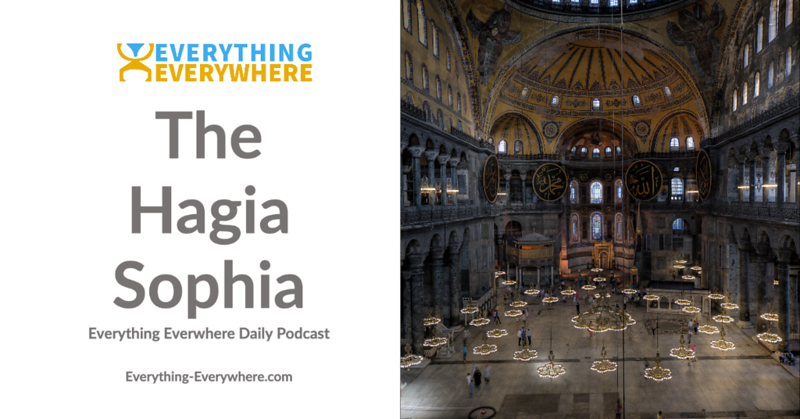 The Hagia Sophia in Istanbul, Turkey is one of the largest, oldest, and most significant buildings in the world. It has served as a holy place for three different religions and has been the focal point for two different empires.

Almost, 1,500 years after its construction, it is still making headlines today.

Learn more about the Hagia Sophia on this episode of Everything Everywhere Daily.

My audiobook recommendation today is 1453: The Holy War for Constantinople and the Clash of Islam and the West by Roger Crowley.

The book details the last days of the Byzantine Empire and the eventual conquest of New Rome by the Ottoman Empire, and the remarkable historic shift which followed.

Before we begin, let’s address the elephant in the room. How do you pronounce the name of this building?

The problem stems from the fact that the name was given in classic greek, which is pronounced slightly different than modern greek, and the city was eventually taken over by Turks.

If you had no background and were just a standard English speaker, you might pronounce it “Ha-gee-ah”. However, that never really has ever been how it has been pronounced.

There is also “hi-ya”,  or “ah-gee-ah” with the “h” silent. The standard pronunciation, and what I’ll be using in this episode, is “aya”. In modern Greek, it would be “eye-ee-ah”.

The second thing is the meaning of the name. I’ve read in several places where they refer to the building as “Saint Sophia”. That is emphatically not the name and it never was. The name of the church when it was constructed meant “Holy Wisdom” and it was an attribute of Christ, not the name of a saint.

With that out of the way, the Hagia Sophia is one of the largest and oldest extant buildings in the world. By this I mean it isn’t a ruin or just a structure like the pyramids, but an actual building with four walls and a roof which is still in use as a building today.

The Hagia Sophia is the third church to exist on the current site, with the previous two churches having been destroyed in riots. The first church was known as the Magna Ecclesia, and it was commissioned by the Emperor Constantius II, the son of Constantine the Great, in the year 360.

This building was destroyed in riots in the year 404.

The next building was constructed by Byzantine Emperor Theodosius II, who consecrated it in the year 415. (Remember back to my very first episode, that the Byzantine Empire was just a name given to the Eastern Roman Empire after the fact. All these people considered themselves Romans)

That building, which also held the name Hagia Sophia, was burned down in a riot in 532 during the Nika Revolt against the Emperor Justinian, which were the greatest riots ever seen in the history of the Empire. Half of Constantinople was destroyed and tens of thousands of people were killed. The Nika Riots are a fascinating subject involving opposing sports teams and will be the subject of a future episode.

The Emperor Justinian, who I previously talked about in my episode on the Plague of Justinian, was a big builder, and when the previous church burned down, he wanted to leave his mark.

He commissioned what would be the biggest building in the world.

The building is of masonry construction built with massive arches and domes. It isn’t a light building with thin walls as you would see in Gothic cathedrals in Europe. It has the appearance of a massive structure, which is what was necessary at the time to create something so large.

The most remarkable thing about the building, to me at least, isn’t the size or its age. It is the fact that it was built in 5 years. Construction of the church began in the year 532 and was completed in 537.

To put that into perspective, most of the major cathedrals in Europe took over a century to build, and many took several centuries. The Sagrada Familia in Barcelona is still under construction and has been for over 100 years.

According to legend, when the building was complete, Justinian said “Solomon, I have outdone thee”.

This massive cathedral became the center of the city of Constantinople, of the Byzantine Empire, and of the entire Eastern Orthodox religion.

The decor in the cathedral matched its size, with some of the most remarkable artwork and gilded religious fixtures in Christendom.

The cathedral was the site of coronations for almost every Byzantine Emperor for 1,000 years.

The building suffered periodic damage over the years, mostly from earthquakes. Earthquakes in 553, 558, and 869 all did damage to the building, which was repaired. The great earthquake of 989 collapsed the western dome, but it too was repaired.

The church was a Greek Orthodox cathedral for most of its life, but it did have a period of 57 years, from 1204–1261, when it was a Catholic Cathedral during the Latin occupation of the city. The Doge of Venice, Enrique Dandolo, who lead the sack of the city, is buried somewhere inside the building, but the exact location is unknown.

After the return of the city in 1261,  it remained as a Greek Orthodox Cathedral until the day which was the most significant day in the history of the city. The day the Roman Empire finally fell, May 29, 1453. On that day, the Ottoman Sultan Mehmet II breached the city walls, Emperor Constantine XI was killed, and the Hagia Sophia became a mosque.

With is conversion to a mosque, there were several massive changes made to the building.

First, the religious mosaics and mosaics of former emperors were plastered over. Islam prohibits images of people, so it was required that the images be removed.

Second, four large minarets were constructed outside the building.  This was done over a period of years by several different sultans.

Finally, the building itself was renovated. By the time the Byzantine Empire fell, the empire and the church had been in decline. By the time the city was conquered, there were reports of the doors literally falling off their hinges. Mehmet II ordered a restoration for the building which was to become the first imperial mosque in the new capital of the Ottoman Empire.

The building served as a mosque for 482 years.

The next big change occurred after WWI when the Ottoman Empire had ended and the Republic of Turkey rose in its place.

The founder of modern Turkey, Mustafa Kemal Atatürk, declared the building to be a museum in 1935 as part of an overall secularization of Turkey.

As part of the conversion to a museum, many of the original Christian mosaics which were plastered over were uncovered. The carpet which had been installed for prayer was removed, exposing the original marble floor, which hadn’t been seen in centuries.

By the 90s, the building was in desperate need of repair again. The fact is, it is a 1,500-year-old building, and anything that old will need constant maintenance. There were issues with the roof leaking, arches and walls needed support, and the water table was starting to rise.

One of the challenges of a building this large and this old is that it is in an almost constant state of renovation and repair.

The most recent chapter of the building occurred in 2020 when Turkish president Tayyip Erdo?an rescinded in 1935 order turning the building into a museum. The building is now again a mosque, but open to the public like cathedrals in Europe are.

If you haven’t been to Istanbul, then you owe it to yourself to go.  The Hagia Sophia is often overlooked on the list of world wonders, but if anything, it deserves a spot near the top.