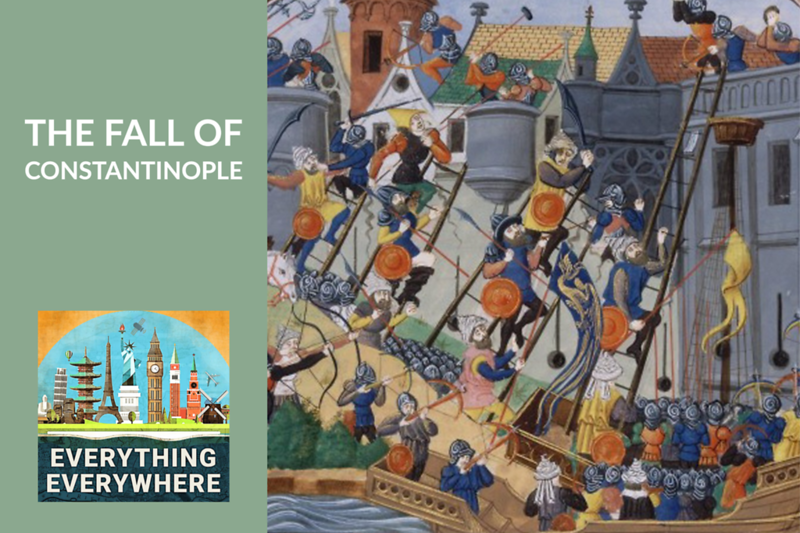 History is full of battles and conflicts. Most of them are forgotten over time as they don’t really impact history. Whether one king or another wins a battle usually doesn’t matter in the big scheme of things.

However, there are moments that truly change world history. When civilizations clash and the outcome can affect the world for centuries.

Learn more about the Fall of Constantinople and what it meant to history, on this episode of Everything Everywhere Daily.

Well, autumn was pretty quick this year. The leaves are all off the trees, and we are getting our first snowfall and freezing temperatures. For the next several months, that means I’m not going outside without my Scottevest jacket.

I’ll often go to a cafe to write and work and I can take everything I need in the pockets of my Scottevest jackets. It can easily hold my Macbook Air, and charging cables, as well as other gear such as a winter hat and gloves.

During the time it existed, no one called it the Byzantine Empire. They called themselves Romans, as did everyone else.

However, by the year 1453, the Empire could barely be called an empire anymore. Over the centuries, their territory kept shrinking. At first, it was due to the Islamic Caliphate, and later it was due to the rise of the Ottoman Turkish Empire.

In 1453, the Ottomans had basically taken up all the territory on either side of the Byzantines. The Byzantines had the city of Constantinople and some territory outside the city, and that was it.

You might think that crushing the last remaining part of the Empire at Constantinople would be easy, but you’d be wrong.

Constantinople was founded by the emperor Constantine in the year 330 and it had survived 1,100 years. Save for the sacking of the city by western crusaders 1204, which was really done through deception, the city had never successfully invaded.

This was primarily due to two things:  the famous Walls of Constantinople, otherwise known as the Theodosian Walls, and the location of the city.

The location of the city, from a defensive standpoint, was brilliant. It was placed on a peninsula. On one side was the Golden Horn, which was an inlet that was easily defended, and for most of its history, a chain went across it preventing enemy ships from entering. On the other side was the Bosporus Strait, which was easily defended. If any armies wanted to attack from the east, they would have to cross the Bosporus

The walls were built by Emperor Theodosian in the early 5th century. The walls were the greatest city walls in all of antiquity and the middle ages.

They were so strong and well built they became the stuff of legend and probably deterred many enemies from attacking in the first place.

The Walls of Constantinople had three layers.

The outer wall was about 10 meters tall and had a walkway on the top where soldiers could be positioned.

This alone would be a better fortification than almost any other city.

However, behind the outer wall was the third wall, the inner wall. This was massive.  It was 6 meters thick and 12 meters high. There were then 20 meter high towers located approximately every 50 meters apart. There were a total of 96 towers in total, and each tower could hold a large ballista.

Some segments of the walls still exist and have been refurbished and can be seen today.

Basically, Constantinople was a very tough nut to crack and no one had ever cracked it in almost 1000 years.

The Ottomans were led by the very young Mehmed II. He had taken the throne just two years earlier at the age of 19.

His father, Murad II actually did quite a bit to expand the Ottoman Empire, however, there was one thing he never achieved: Constantinople.

No one really thought much of Mehmed because of his age, but he set to taking Constantinople as a top priority.

He had constructed a large fleet as well as a fortress on the western side of the Bosphorus.

The Siege of Constantinople began on April 5.

The Turks vastly outnumbered the Byzantines inside the city. The armies of Mehmed may have had as many as 200,000 men. The defenders of the city probably only had about 7,000, and 2,000 of those were foreign mercenaries.

Mehmed began the siege by offering the Byzantine emperor Constantine XI Palaiologos a chance at surrender. If he gave up the city, everyone would be allowed to live and they could leave unharmed.

Constantine declined and the siege was on.

The secret weapon to the Turkish siege was their cannons. They had built some of the largest cannons ever seen. One was a 27 foot or 8.2-meter monster that could toss a 600 pound projectile over a mile.  They had an estimated 50 to 200 cannons.

The cannons, although they were big, were very inaccurate and took hours to reload. That gave the defenders plenty of time to repair the walls.

While that was happening, the Ottoman fleet tried to enter the Golden Horn to attack the city by the sea. However, the great chain plus Byzantine ships using Greek Fire kept them back. Here I’ll reference my previous episode on the subject of Greek Fire.

The Ottomans eventually found a way around the chain by a most ingenious method. They created a greased wooden path about a mile long that went around the chain. They then dragged their ships across the land on the wooden road and routed the Byzantine ships inside the Golden Horn.

Mehmed hired teams of sappers to tunnel under the walls, but the defenders managed to discover them and clear the tunnels out with greek fire.

The Ottomans tried making several frontal assaults against the wall, but each time they were repelled by the defenders.

Despite the overwhelming numerical advantage, the Turks simply could not breakthrough.

On May 21, he sent Constantine XI another offer to surrender. His reply said, ”As to surrendering the city to you, it is not for me to decide or for anyone else of its citizens; for all of us have reached the mutual decision to die of our own free will, without any regard for our lives.”

Around this time, Mehmed’s advisors were having doubts about the siege. They began to question the success of the operation and if it was worth the cost even if it were successful.

The took several days to prepare for the attack. They had fired over 5,000 shots from their massive cannons over the course of the siege and the walls had been significantly weakened. Even though the defenders had managed to repair the walls and fend off all of the attacks to date, it was really just a numbers game and the numbers were on the Turk’s side.

The final attack began just after midnight on May 29th. The first wave was the Christian troops under the Ottomans. More waves were thrown against the walls including regular infantry units and mercenaries.

The mercenaries managed to finally break through the inner wall, but they were pushed back by the defenders.

Finally, the last wave of the assault was the elite Janissary units. This was literally it for the Ottomans. If this wave didn’t breakthrough, the siege was over.

The Janissaries managed to injure the Genoese general who was the commander of the defending forces. When he was seen to be taken into the city for medical attention, the defense collapsed. The Ottomans broke through, raised their flag above one of the gates, and opened the gate to let everyone in.

The Ottomans sacked the city. Tens of thousands of children were taken as slaves. Tens of thousands more were raped and killed. The elderly who sought refuge in the churches were slaughtered, and those who survived were enslaved.

Constantine XI Palaiologos, the very last Roman Emperor, was killed, but it isn’t known exactly how. Some say he died in battle, and others say he committed suicide.

After three days, Mehmed put an end to the sacking and had a triumphal procession through the city. Anyone who survived and wasn’t taken into slavery was allowed to return home. The Hagia Sophia was turned into a mosque. He appointed his own Patriarch of Constantinople and finally declared Constantinople to be the new capital of the Ottoman Empire.

When news of the conquest of Constantinople reach the rest of Europe, it caused shock waves.

Constantinople was the center of Orthodox Christianity. Of the five great patriarchial seats of Christianity, Rome, Constantinople, Alexandria, Antioch, and Jerusalem, four were now under Islamic control.

Perhaps most importantly, this was the last dying breath of the Roman Empire. Mehmed actually claimed the title of Roman Emperor because of his conquest, and some people recognized it as such, but few people in Europe did.

Rome, which was founded as a city in Italy over 2,000 years earlier, was finally extinguished just 40 years before Columbus happened upon the New World.

Despite pleas for help, the western Christians never came to the aid of Constantinople. They were too busy fighting amongst themselves, and the split between eastern and western Christianity was too great. Nonetheless, they were still shocked at the fall of the city.

There were calls for a new crusade to take the city back, but nothing ever became of it.

Within a century, the Ottomans would be at the gates of Vienna and threatening western Christendom itself.

The center of Orthodoxy shifted from Constantinople to Russia. In fact, Russia declared itself the Third Rome and the king took the title of Tsar, which means “Caesar”.  In fact, Ivan III married one of the only surviving members of the Byzantine imperial family, Sophia Palaiologina, to cement his claim to the title of Tsar.

Finally, historians have often used the fall of Constantinople as the point where the middle ages ended, and the age of the renaissance began. Many of the Byzantine refugees to the west are believed to be part of the reason for the revival in Greek and Roman studies.

Today, Constantinople is now called Istanbul. A name that may have come from the Greek eis t?n pólin, which meant “to the city” and was informally used even before the conquest. The name was formally changed in 1930.

The Fall of Constantinople is one of a handful of historically and globally significant moments in history when cultures clashed and civilizations fell. The ramifications of May 29, 1453, can still be felt in the world today.