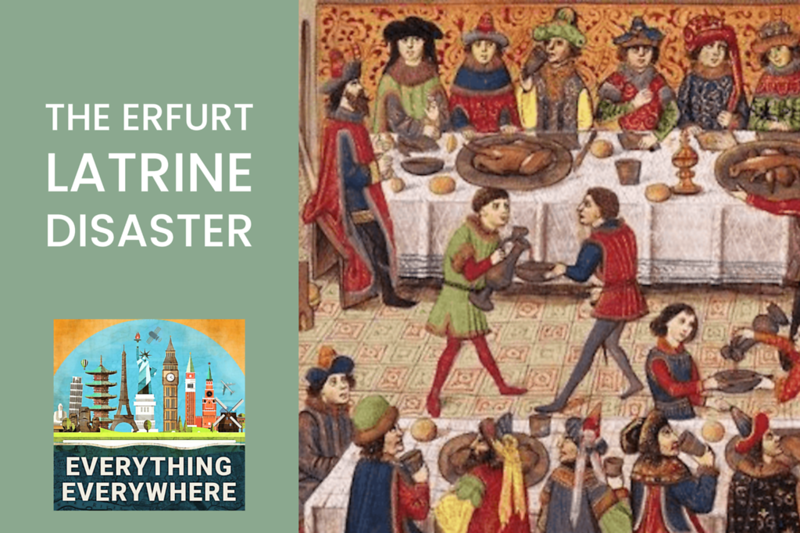 In the year 1184 in the Dutchy of Thuringia, in what is today the country of Germany, a conflict raged between the Count of Thuringia and the Archbishop of Mainz.

To resolve this dispute, the German King Henrich VI called the parties to the city of Erfurt to settle their outstanding issues.

Things did not go as anyone planned.

Learn more about the Erfurt Latrine Disaster on this episode of Everything Everywhere Daily.

My audiobook recommendation today is Medieval Europe by Chris Wickham.

Tracking the entire sweep of the Middle Ages across Europe, Wickham focuses on important changes century by century, including such pivotal crises and moments as the fall of the western Roman Empire, Charlemagne’s reforms, the feudal revolution, the challenge of heresy, the destruction of the Byzantine Empire, the rebuilding of late medieval states, and the appalling devastation of the Black Death.

The story of what happened in the town of Erfurt in the year 1184 is…..odd. Yet, it wouldn’t be implausible for something like this to happen in the 21st century, albeit under different circumstances.

The event started with a land dispute between members of the nobility.

Thuringia is a state in Central Germany. Back in the 12th century, the entire region was divided into a patchwork of dutchies, principalities, and other land claims between various aristocrats and the church. There were almost always competing land claims, as so many of the land titles had ancient origins and everything became confusing and disputed over time.

In this particular instance, the two aggrieved parties were the Count of Wittelsbach, Conrad I, who also happened to be the Archbishop of Mainz, and Ludwig III, the Landgraf of Thuringia.

The dispute went back to a Duke, Henry the Lion, who hadn’t supported Holy Roman Emperor Frederick Barbarossa sufficiently, so he was tried in absentia and his land was taken from him.

It was this land that was the core of the dispute, however, there was a lot more to it including an antipope. None of that is really relevant to what this story is about, however. Suffice it to say, there was a land dispute.

Enter the Henrich VI of the Hohenstaufen dynasty. He was the King of Germany, son of Frederick Barbarossa, and would one day be the Holy Roman Emperor.

Both parties and the land in question were under the domain of the Holy Roman Empire, so the Emperor decided to resolve the dispute between them once and for all. His son was on the way to Poland and was passing through Thuringia, and used this opportunity to take care of business.

To this end, he ordered the parties to assemble in the town of Erfurt in Thuringia for a diet, where the issue would be settled.

The issue wasn’t just between the two men in question. There were a whole bunch of other landowners and other minor nobility who had an interest in one side or another in this dispute. Moreover, when the future Emperor was coming to town, everyone wanted to be on the guest list.

On July 25, 1184, the parties assembled at the Petersberg Citadel in Erfurt, the largest city in Thurngia.  The citadel got its name because it was a fortification on the top of a hill, but it was also a monastery, and the monks would be playing host to the event.

It is at this point I need to go in a totally different direction to provide some backstory.

In most medieval castles, the toilet was a small alcove that protruded from the main building. There would be a seat with a hole, and that would drop directly outside onto the walls of the castle. If you go to visit any castles in Europe, you can usually see them if you look closely.

In the monastery, they had a slightly different setup. They had a latrine. Today, a latrine is just considered a synonym for a toilet, often with a military connotation. However, there is a specific meaning to the word.

A latrine is a communal toilet. The seats usually are ringed along the side of the wall, and there is absolutely no privacy. In the case of the monastery, the latrine was situated above a cesspool. A big hole that just filled up over time. In the case of this particular monastery, the cesspool was made extra-large, so the monks wouldn’t have to empty it out frequently, because it was a really crappy job.

The meeting with King Henrich, the Bishop, the Count, and all the other nobles took place in a room which was situated above the latrine.

Over a hundred nobles of various ranks were assembled in the room, along with the major parties in the dispute.

As the room reached its peak capacity……the floor collapsed. It might have been rotten wood, or it might have been poor engineering. It is really hard to know because the 12th century didn’t really have building codes.

When all of the people, furniture, and the heavy wooden beams of the upper floor fell into the latrine, the floor of the latrine collapsed as well, sending everyone and everything into the cesspool, which I have to mention was near capacity.

Everything and almost everyone was in a deep pool of liquid human excrement.

Many people were killed in the initial collapse. Many more who survived the collapse drowned in the cesspool. It is estimated that between 60 and 100 people died in the disaster.

King Henrich and Count Ludwig did not fall into the latrine. They were both sitting on chairs in alcoves with a separate stone floor. However, when the floor gave way, they were stranded in their seats watching the horror unfold two stories below them.

Bishop Conrad was on the floor with everyone else but amazingly survived.

Not only did he survive the fall and didn’t drown, but he also didn’t get any subsequent infections.

Eventually, both the king and the count were rescued when ladders were brought in to get them down.

Once he was safe, the king left Erfurt immediately. He knew he wanted to make a splash in Erfurt, but not like this.

It isn’t known if the land dispute was ever settled.

Over 900 years later, the Erfurt Latrine Disaster remains the number one, number two disaster in history.