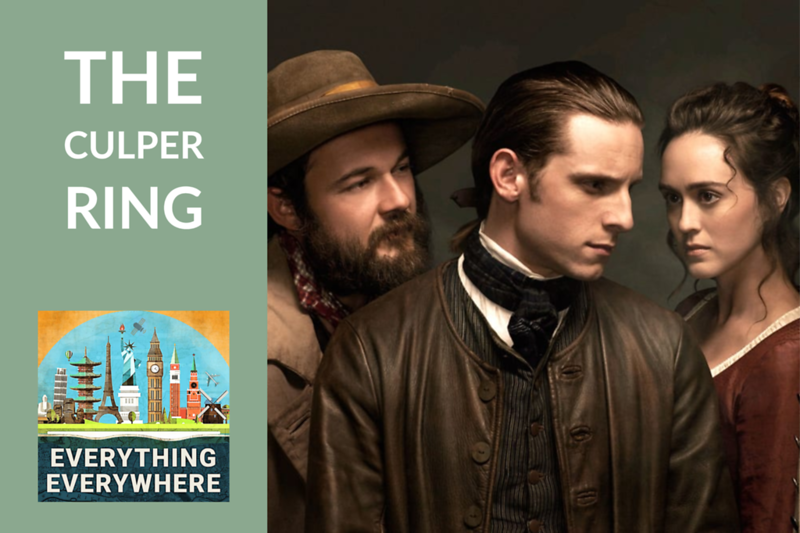 In 1778, in the middle of the Revolutionary War, while camped outside New York City, General George Washington and Major Benjamin Tallmadge hatched a plan.

They created a network of spies that would provide information about British military effort, which could be used by the colonists in fighting the war.

It turned out to be pivotal in the war for independence.

Learn more about the Culper Ring, and America’s first spy network, on this episode of Everything Everywhere Daily.

As I’ve mentioned many times before, I’ve been wearing Scottevest gear for years as I’ve traveled around the world. In fact, I’ve worn Scottevest clothes on all seven continents.

I’ve worn their gear photographing penguins in Antarctica, watching polar bears in Manitoba, on the sand dunes of Namibia, hiking on glaciers in Argentina, and even being launched from an aircraft carrier.

They are the perfect clothes for traveling around the world or just carrying your gear around town with their many pockets.

The American Revolution was never a foregone conclusion.

If there were odds given for the success of the revolution at the start of the war, I would have put the Brtish as overwhelming favorites.

They had more money, more people, more resources, the world’s largest navy, and a much larger better trained, and equipped army.

The only thing that the colonists had going for them was home field advantage and a plucky never say die attitude…..and the French, but we’ll leave that for another episode.

When the revolution started, lines were not clear-cut. About the third of the population were patriots and a third were British loyalists, the other third were indifferent. The divisions often ran within families and you couldn’t easily tell one group from the other.

When the war began in 1775, the colonists had no real plan or organization. It was something that sort of coalesced over time.

Intelligence is an important part of any military enterprise. As the war progressed, the colonists provided intelligence to the Continental Army, but it was an incredibly disjointed effort.

People would come forward with what they knew or sent information individually, but it was no way to conduct formal military intelligence. There was no way to verify the information or the trustworthiness of the source.

The lack of colonial intelligence came into play during the Battle of Long Island when the Colonial Army was routed and the only reason they survived was due to an incredibly daring nighttime escape. The entire revolution was almost lost right there.

After this fiasco, in August of 1776, Washington made his first attempt at organized information gathering. He instructed Col. Thomas Knowlton to recruit men to engage in reconnaissance and espionage. These men were known as Knowlton’s Rangers.

The most famous of Knowlton’s Rangers was a man named Nathan Hale.

He was secretly sent into New York City under a false identity and was captured by the British. He was executed without trial and before he was hung, his famous last words were ‘I only regret, that I have but one life to lose for my country.’

Being a spy was a very risky business.

Washington desperately needed intelligence for New York City and the surrounding area. New York was under British control and it was the primary port for almost all British shipping and troop movements coming into and out of the Americas.

If the colonists had better eyes and ears around New York, it would give them a better idea of what the British were planning and how to prepare.

The next attempt was in 1777. The next plan was to use civilians instead of soldiers. Washington thought that civilians would be less conspicuous and would find it easier to gather intelligence.

He recruited one Nathaniel Sackett who lived on Long Island. Sackett did manage to bring in some information but ultimately it was felt he wasn’t bringing in enough intel and it wasn’t fast enough.

While Sackett didn’t pan out, his military contact and the man overseeing the program, Major Benjamin Tallmadge, did.

In August 1778, a year after the unsuccessful Knowlton’s Rangers, the intelligence-gathering efforts of the Continental Army finally began to come together.

Washington appointed Tallmadge as the director of the continental secret service.

One of his first acts was to recruit two men. Lieutenant Caleb Brewster of Norwalk, Connecticut who came forward to offer his intelligence services, and a civilian farmer named Abraham Woodhull, who was a childhood friend to both of them, who lived in Setauket on Long Island.

The spy network was organized differently than before. For starters, Washington didn’t know who Woodhull or any civilians were. He only knew them by code names.

The code name given to Woodhull, who served as the day-to-day organizer, was “Samuel Culper”. It was selected by Washington himself which came from Culpeper County, Virginia, where he used to work as a surveyor when he was younger. Tallmadge took the alias John Bolton.

The codename of the entire operation became known as the Culper Ring.

The system was set up such that the various parties were separated from each other. Woodhull would give reports to Brewster who lived on the other side of Long Island Sound.

Brewster would then pass them on to Major Tallmadge who would then report to General Washington.

Woodhull frequently would visit New York City because he had a sister that lived there and gave him an excuse to visit.

During his trips, he would take note of the number and types of British ships in port and the activities of troops.

In June 1779, he recruited Robert Townsend who was a merchant in New York City. Because he lived in the city, his presence would less conspicuous than Woodhull coming into the city. Townsend also wrote a column in a loyalist newspaper and was part owner of a coffee house where British officers would congregate.

James Rivington, who co-owned the coffee house with Townsend and was also the owner of the loyalist newspaper, was also a member.

With spies located inside New York, Woodhull didn’t need to make as many trips. They recruited a Setauket tavernkeeper named Austin Roe who served as a courier between Townsend and Woodhull. He would take messages from New York and then used a dead drop in the middle of a farm field where Woodhull would collect the messages.

Anna Strong, a Setauket housewife, and the wife of an imprisoned local judge was also part of the ring. She would send codes when a message was ready for pickup from Brewster by hanging certain articles of clothing out. If she hung a black petticoat, that was a signal for Woodhull that Brewster was in town.

She would then hang a set number of handkerchiefs to indicate which of 6 pre-arranged drop points the message was located for Brewster.

The messages themselves used a coded system. They had a codebook that was required to decode messages. Washington was referred to as 711. 745 was England. New York was 727. There were 53 different proper nouns given codes between 711 to 763.

They also used invisible ink with messages written between the lines of normal letters.

They even coded words in the newspaper to send communications.

This was, by late 18th century standards, a very sophisticated operation.

Over the five years, the Culper Ring was in operation from 1778 to 1783, they were the most successful intelligence operation of the war by either side.

Their information prevented a British ambush of French forces in Rhode Island.

They discovered a British plan to counterfeit continental currency on the same paper the colonists used, which allowed the Continental Congress to retire the notes early.

Perhaps most notably, in 1780, they discovered the correspondence between American General Benedict Arnold and British Major John Andre about Arnold’s defection.

The identities of the members of the Culper Ring were kept the secret well after the end of the Revolutionary War. It wasn’t until 1929 that Robert Townsend was identified as “Culper Jr.” through handwriting analysis.

The Culper Spy Ring has been used as the basis for several novels as well as the recent TV series Turn: Washington’s Spies which ran for four seasons. I highly recommend it if you haven’t watched it.

In the end, the British never caught or uncovered any member of the Culper Ring.

Their commitment to secrecy, aliases, dead drops, and coded messages, all of which became the norm in spycraft later on, were the keys to its success.