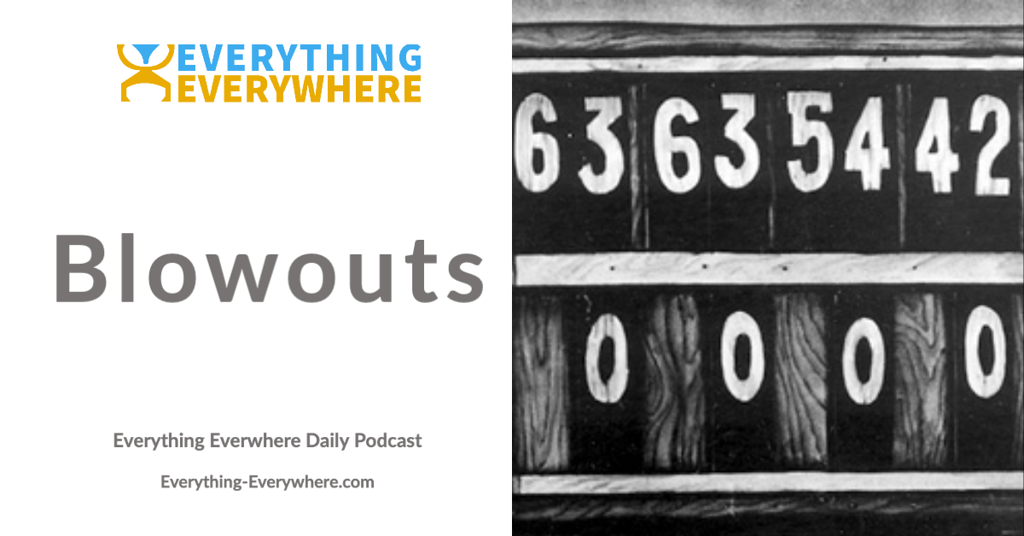 In the world of sports, most people enjoy very close fought, exciting games that go down to the wire. If you were to take a poll on what the best games or matches in history were in any given sport, it would probably involve a close score with a last-second victory to put one team over the edge.

However, there are times when a team gets whooped so bad, you just have to sit back and admire the shellacking they received.

This is the realm of the blowout.

Learn more about some of the most lopsided victories, and losses, in the history of sports on this episode of Everything Everywhere Daily.

The games I’ll be talking about today aren’t just lopsided. Lopsided scores happen every so often, and probably even week to some extent in any organized sports league.

I’m going to be talking about legendary losses that are so astonishing, it is hard to even figure out how it was physically possible. After all, even an incompetently bad team can often lay down enough to serve as a speedbump to prevent some scoring.

The legendary losses often have a story behind it.

Perhaps the best-known blowout occurred in 1916 when Georgia Tech in Atlanta defeated Cumberland College of Tennessee in a football game by the score of 222 – 0.

To put this defeat in perspective, there are only been 11 games since the end of WWII, in any collegiate division, where a team has scored 100 points in a game.

So what happened in the Georgia Tech vs Cumberland game?

To understand the game, you first have to go back to a baseball game between the two teams earlier in the year where Cumberland beat Georgia Tech by a score of 22-0. Cumberland had used semi-professional baseball players as ringers. The Georgia Tech baseball coach was really upset over what Cumberland did, and didn’t forget it.

Cumberland had disbanded their football team prior to the start of the 1916 season and canceled all their games. However, they had a contract with Georgia Tech which stipulated that they would owe Georgia Tech $3,000 if they didn’t show up to play. An amount worth about $71,000 today. In fact, the Georgia Tech football coach offered Cumberland $500 to play if they did show up, and they would cover the expenses for the school.

It is here I should point out that Georgia Tech’s football coach was also their baseball coach who lost to Cumberland earlier in the year, and that his name was John Heisman. If that name rings a bell, it is because John Heisman is the same Heisman that the award is named after for the best college football player in the country.

Cumberland, not wanting to lose money, assembled a team of 16 players, mostly from the same fraternity, to go and play. Some of them had never even seen a football game before and didn’t know the rules.

Heisman had a plan. He was going to go full throttle for the entire game and jack up the score as high as possible, which was the entire purpose of paying Cumberland to travel to Atlanta.

His reasoning for doing this was two-fold: 1) he wanted revenge for what Cumberland’s baseball team did to him, and 2) he wanted to prove a point to the sportswriters who tended to rank teams based on how many points they scored and the margin of victory, not strength of schedule.

Cumberland had -28 yards of offense for the game with 15 turnovers.

Georgia Tech scored 32 touchdowns, had 522 yards rushing, and didn’t even attempt a single pass. 12 of the touchdowns were scored by the defense or special teams.

It was so bad that a few Cumberland players ran off the field and hid. Back in 1916, the rules allowed for the team scored against to select to kick or received, and several times Cumberland elected to kick. They even punted on third down several times just to surprise Georgia Tech.

The was only one play in the entire game where Cumberland managed to stop Georgia Tech from scoring, and that was the last play of the game which was an extra point attempt. Cumberland used a pyramid defense where the players would stack up on top of each other, and one player would jump on their backs to block a kick. The formation is illegal today, but it was allowed back in 1916. It worked, however, the blocker, a Cumberland player by the name of Vichy Woods, suffered a horrible injury when he blocked the kick with his face.

The biggest blowout in the history of the NFL happened, believe it or not, in the NFL championship game. In the 1940 NFL Championship, the Chicago Bears defeated the Washington Redskins 73-0. Here too the motivation was revenge. Bears coach George Hallas showed his team a newspaper where the Redskins coach called them crybabies and quitters.

In international association football, aka soccer, Vanuatu defeated Micronesia 46-0 in the 2015 Pacific Games. In this case, Micronesia was just bad.

In club football, the most lopsided score occurred in Madagascar where AS Adema beat SO l’Emyrne 149-0 in 2002.  The game occurred in the last game of the Madagascar championship. The champion is determined by a round-robin of the top four teams. In the game leading up to this, a very questionable call at the end of their previous match resulted in a draw for SO l’Emyrne, which meant that the final match was meaningless as they couldn’t win regardless of the outcome.

SO l’Emyrne protested the officiating in the final, meaningless game, by scoring own goal after own goal the entire game. AS Adema won without ever touching the ball.

Perhaps the biggest surprise blowout I found was an Olympic qualifying match in 2008 in Women’s’ Hockey between Slovakia and Bulgaria.  Slovakia won 82-0. I watched some of the video of this game, and there didn’t seem to be any special circumstances surrounding it. Bulgaria was just bad. It seemed like they barely knew how to skate. Slovakia scored a goal ever 43 seconds.

102-24 is a blowout, but it isn’t necessarily legendary. What makes this score legendary is that it happened in one half. South Torrance didn’t even show up for the second half. So Lisa Leslie scored the second-highest point total in a single game…..in one half.

But that wasn’t the biggest blowout in high school basketball. That happened in 2009 when the girl’s team from Covenant School of Dallas defeated Dallas Academy 100-0.  Dallas Academy is a school for kids with learning disabilities, and they fielded a team of 8 players out of a student population of 20 girls. They hadn’t won a game in 4 years prior to this one.

The blowout made national news, and the coach of the winning team was fired two weeks later. Despite the lopsided matchup, despite being fired, and despite being lambasted in the national media, Covenant’s coach Micha Grimes has never once apologized.