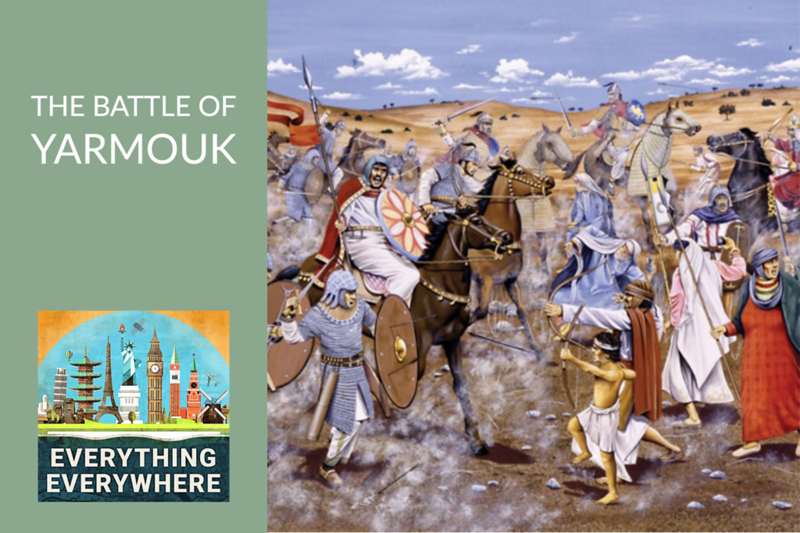 From August 15 to August 20, in the year 636, one of the most important battles in history took place.

The participants in the battle couldn’t have known it, but the results of that battle would shape world history for the next 1400 years.

Much of the geography of the world today, can be traced back to the results from those six days.

Learn more about the Battle of Yarmouk, one of the most important battles in world history, on this episode of Everything Everywhere Daily.

I considered doing an episode on the greatest battles in history. I did quite a bit of research on the topic and I eventually found myself asking the question, what is a ‘great’ battle?

I previously did an episode on the Battle of Canne, where the Romans were routed by the Carthaginians during the Second Punic War.

It is a very famous war simply for the brilliant generalship of Hannibal. However, in the end, it didn’t matter. Rome lost the battle but won the war.

So I began trying to find battles that really turned the course of history. These types of conflicts wouldn’t have been one European king fighting some other European king, but rather clashes of civilizations.

A battle where, if things were to have gone differently, the world would be a very different place today.

I might still do that episode, giving an overview of such battles, but I also wanted to give each of these their own due, because they are so important to creating the world we live in, and also, because many of these battles are ones that most people have never heard of.

That is the case with the battle I want to talk about today, the Battle of Yarmouk. The first great, decisive battle between the early Islamic Caliphate and the Christian Byzantine Empire.

The early 7th century was pretty close to peak Byzantine Empire, which if you remember back to my very first episode ever, was actually just the Roman Empire which didn’t fall apart in the East. At no point during the Byzantine empire did anyone ever call it that.

Their biggest adversary during this period was the Sasanian Empire which was primarily centered in modern-day Iran, Iraq, Pakistan, and Afghanistan.

This east-west clash was the current version of a similar which had gone on for 1,000 years. First, it was the Greeks and the Persians, Then it was the Romans and the Parthians, and now it was the Byzantines and the Sasanians.

The point is, that neither Byzantines nor the Sasanians were paying any attention to what was happening in the Arabian peninsula.

Arabia was a huge desert and the people who lived there were nomadic. They weren’t considered a threat to any of the major powers

Well, they should of.

In the first several decades of the seventh century, the prophet Mohammed created a new state, centered in the western Arabian city of Mecca. From there, he and his followers managed to unite the Arabian Peninsula through a series of conquests and conversions and then began to expand outward.

Mohammed died in 632, and his successor was his close advisor and father-in-law, Abu Bakr. He became the first Caliph of the first caliphate, the Rashidun Caliphate.

He and his successor two years later, Umar, rapidly expanded out of the Arabian peninsula.

Much of this success was due in large part to the general Khalid ibn al-Walid. I previously did an entire episode on al-Walid, so I’m not going to go into too much depth on him here.

However, I will simply say al-Walid was unquestionable the greatest Muslim general of the period, and probably one of the top 5 or 10 generals in history.

As the Caliphate spread north into the Levant, they were on a collision course with the Byzantines.

The Byzantines controlled everything around the eastern Mediterranean at the time, including what is today Egypt, Israel, Lebanon, Syria, and Turkey.

The Byzantines, under the Emperor Heraclius, also had recently conquered lands further to the east, from the Sasanian Empire.

Heraclius is a very underrated Emperor. He was emperor for over 30 years, which is an incredibly long time for a Roman Emperor, and has been largely forgotten by history. I do think he might be worth an episode of his own in the future.

The Caliphate took Damascus in 634 and took the city of Emesa, now known as Homs, earlier in 636.

By August 636, the two sides were ready for a showdown.

The location was near the Yarmouk River in what is today just southeast of the Sea of Galilee near the Israeli/Jordanian border. The Yarmouk is actually just a tributary of the Jordan River.

The Muslim army was led by Khalid ibn al-Walid. The Caliph Umar didn’t get along with him, but he knew he was his best general and put him in charge, which was a smart move as he had never lost a battle.

The Roman forces on the ground were led by an Armenian General by the name of Vahan.

The Muslim forces were almost all Arab and Muslim, whereas the Byzantine forces were a mix of Slavs, Franks, Greeks, Georgians, Armenians, and Christian Arabs.

The multi-ethnic and linguistic nature of the Byzantine forces made them less cohesive than the Islamic forces.

The Byzantine Army was at least twice the size of the Muslim army. The estimates of the number of men at arms on each side vary widely. The original sources place the number of soldiers in the Caliphate army at 24,000–40,000, and the number of Byzantine forces at 100,000–240,000.

Regardless of what the actual numbers were, the Byzantines had a numerical advantage of at least 2-to-1 and probably even greater.

However, they had several problems. Since they had lost Damascus, they had issues with supplies and food, whereas the Caliphate did not.

On the first day, as the forces lined up against each other, there was little fighting. Champions from each side went out to fight each other. There was a limited attack by the Byzantines but it was just to test the Islamic forces.

On day two, Vahan attacked at dawn when he thought the other side would be praying. He pushed forces up the middle, but the main attack came on the flanks.  al-Walid was ready and after being pushed back they managed to maintain their position until sunset.

On days three and four, the Byzantines tried again to push through with their superior numbers, but each time they were beaten back by al-Walid and his men.

On day five, Vahan and the Byzantines sought peace. Abu Ubaidah, the governor of Syria ecstatic that they could bring the fighting to a negotiated end, but al-Walid rejected the offer.

This was what he was looking for. He now knew that after days of failed attacks, the enemy was demoralized and that now was the time for him to strike.

On the 6th and final day of the battle, al-Walid enacted his plan of attack. The Arab infantry moved forward to engage with the Byzantine infantry. While that was happening, al-Walid sent his cavalry around the Byzantine left and to their rear to push the Byzantine cavalry off of the field of battle.

With that, the Byzantine infantry was surrounded on three sides, and the route began. Soldiers that weren’t cut down either ran into the Yarmouk River or jumped off a nearby cliff.

The Byzantines lost about half of their entire force. The deaths were in the tens of thousands, depending on the numbers you accept.

This battle completely changed the geopolitical balance of the 7th century.

Syria and the entire Lavant became predominantly Muslim, which his still the case today.

That same year, 636, they defeated the Sassanian Empire at the Battle of al-Qadisiyya.

The next year they took Jerusalem, which over 400 years later would be the impetus for the first crusade.

Muslim forces continued one of the most rapid expansions of territorial acquisition in world history, spreading throughout North Africa and eastward into Persia and Central Asia.

It wasn’t until the Battle of Tours almost 100 years later, which actually took place in France, that expansion of the Caliphate was halted.

If the Battle of Yarmouk had gone the other way, and it easily could have if things been just a bit different, the Muslim forces under the Caliph Umar and General Khalid ibn al-Walid would have been pushed back into the Arabian peninsula, and world history would have taken a radically different course.

As for the generals, Vahan was most probably killed in action on the last day of the battle. There were rumors about him surviving and becoming a hermit back in Armenia, but there was never any documentation.

Khalid ibn al-Walid was pretty much forcibly retired soon afterward. He died in the city of Homs, Syria, and his mausoleum is still there today.

Even if you had never heard of the Battle of Yarmouk, it easily qualifies as one of the most significant battles in world history.

In the words of military historian George F. Nafziger,  “Although Yarmouk is little known today, it is one of the most decisive battles in human history…… Had Heraclius’ forces prevailed, the modern world would be so changed as to be unrecognizable.”

I just wanted to give everyone a quick update on the state of the podcast. Sort of first-quarter report.

As I’m sure all of you know, producing this podcast is a lot of work. I’m literally the only person who works on it and I have no one who helps me with any aspect of the show. All of the research, writing, recording, editing, promotion, and marketing are all done by myself. The folks at Airwave Media help me find advertisers, but that’s it.

It is basically a full-time job where I don’t get weekends off, and so far it doesn’t come anywhere close to paying a part-time income.

The weird thing about the podcasting business is that only the top 1 or 2% of podcasters are actually able to make a living from it, and the vast majority of those are either celebrities or work for large networks that actually own the show and pay them a salary.

The show has grown quite a bit in 2022 so far. Things are looking better every day, and I can definitely see a light at the end of the tunnel.  My immediate goal is just to get to a point where I can cover basic expenses.

From there I have plans for hiring help to improve the show, and maybe even at some point in the future, spin off other related podcasts.

Anything you can do to help me continue doing the show would be appreciated. If you could be a supporter over at Patreon.com, that would be great. I still have an executive producer spot available.

I don’t make appeals like this very often, and I don’t intend to make a habit out of it, but if you enjoy what I’m doing, please help spread the word.