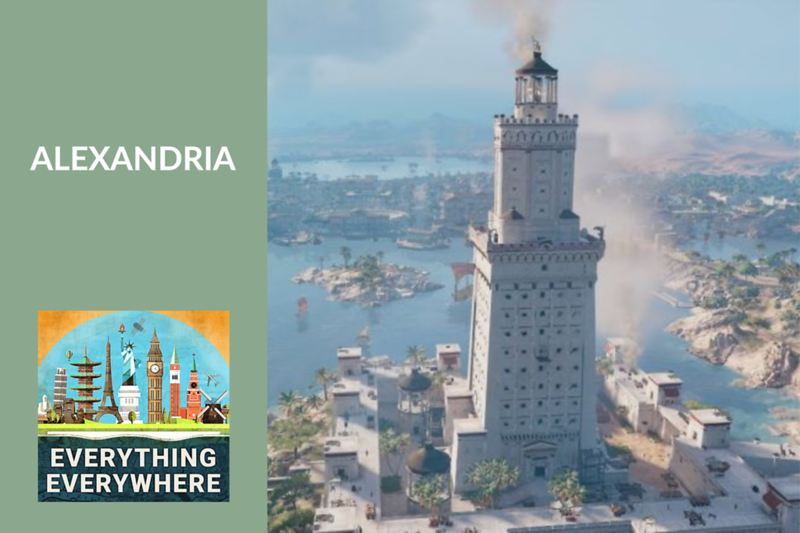 In the year 331 BC, fresh from his conquest of Egypt, Alexander the Great established a new city in Egypt named after himself.

This new city, situated on the shore of the Mediterranean Sea, at the end of the Nile Delta, would go on to become one of the most important cities in the world, and Alexander’s city is still alive and vibrant today.

Learn more about Alexandria, the “Bride of the Mediterranean” on this episode of Everything Everywhere Daily.

My audiobook recommendation today is The Rise and Fall of Alexandria: Birthplace of the Modern Mind by Justin Pollard, Howard Reid.

Founded by Alexander the Great and built by self-styled Greek pharaohs, the city of Alexandria at its height dwarfed both Athens and Rome. It was the marvel of its age, legendary for its vast palaces, safe harbors, and magnificent lighthouse. But it was most famous for the astonishing intellectual efflorescence it fostered and the library it produced. If the European Renaissance was the “rebirth” of Western culture, then Alexandria, Egypt, was its birthplace.

It was here mankind first discovered that the earth was not flat, originated atomic theory, invented geometry, systematized grammar, translated the Old Testament into Greek, built the steam engine, and passed their discoveries on to future generations via the written word. Julius Caesar, Mark Antony, Cleopatra, Jewish scholars, Greek philosophers, and devout early Christians all play a part in the rise and fall of the city that stood “at the conjunction of the whole world”.

If you look at a map of Egypt today, it is like a rectangular postage stamp in the upper right corner of Africa. However, most of the land which constitutes Egypt is totally empty. It is a desert.

If you look at a nighttime satellite image of Egypt, all of the lights in the country are located along a line going down the Nile River. This fact about Egypt hasn’t really changed over thousands of years.

Historically, everything about Egypt was centered around the Nile. The deserts to the east and the west of the Nile protected Egypt from invasion. There was some threat from Nubia in the south, in what is modern-day Sudan, but it wasn’t a huge threat.

Whatever threats Egypt faced always came from the north.  Almost all of their invasions came from the Levant. Babylon, Persia, and Greece all pretty much invaded Egypt from the same direction.

It is surprising then that so much of the infrastructure built in ancient Egypt was built further south. While Egypt did have some settlements on the Mediterranean, they didn’t have anything resembling something like Alexandria.

When Alexander the Great began his conquests of the known world, he came through Egypt and established the city in 331 BC. He named the city Alexandria after himself, which was pretty much something he did in every place he conquered. There were cities named after Alexander all throughout the Middle East and Asia.

There was already a small town already located nearby called Rhakotis. According to legend, Alexander didn’t have any chalk, so he laid out the outline of the city with grain, which was quickly eaten by seagulls.

The reason why the location was selected was that it had the potential for a harbor. There really weren’t any good harbors along the Mediterranean in the Nile Delta, which is one reason why the Ancient Egyptians never had a major city there. The harbor of Alexandria would have to be built, but Alexander had the foresight to see how it could be done.

When Alexander left Egypt, he left Alexandria never to return again. Well, he wouldn’t return again while alive. More on that in a bit.

The person who was left to actually layout the city was his chief architect, Dinocrates of Rhodes. Dinocrates designed Alexandria to be a pretty typical Greek settlement. However, there were some major differences.

For starters, there was hydraulic engineering which was done to bring fresh water from the Nile right into the city.

Secondly, right from the outset, he planned for something called the heptastadion. The heptastadion, which got its name from being seven Greek stadia long, was a 600-foot long land bridge that connected the mainland of Alexandria to the island of Pharos which was right off the coast.

The heptastadion was the basis of the two harbors of Alexandria, and once it was built, the then former island of Pharos became the location of the famous Lighthouse of Alexandria.

I should note here that from the very founding of the city, Alexandria might have been located in Egypt, but it was fundamentally a Greek city.

When Alexander died, he left no successor, so his top generals split up the empire and went to war with each other. One of his top generals, Ptolemy, raced back to Egypt after the death of Alexander and took Alexander’s body with him.

It was there he established himself as the first Pharoah of the Ptolemic Dynasty. The last dynasty of Egypt. Ptolemy set up the capital of his new dynasty in Alexandria.

This is the dynasty that Cleopatra belonged to and the dynasty was pretty much all Macedonian. In fact, the name Cleopatra isn’t even an Egyptian name, it’s a Macedonian name. I’ll be doing a future episode on Cleopatra and maybe one on her sister as well who is fascinating in her own right.

The body and tomb of Alexader will also be the subject of a future episode. In fact, one of the reasons I’m doing an episode on Alexandira now is that there are so many future episodes that will reference Alexandria, I figured it was better to do this episode first.

Alexandria, as the new capital of Egypt, grew quickly. Within a generation, it was bigger than Carthage. It quickly became one of the most important trading cities in the world. Goods from the Arab world, India, Nubia, and Ethiopia, would pass through on the way to the rest of the Mediterranean, and vice versa.

Within a hundred years of being founded, it became the biggest city in the world.

After the death of Ptolemy in 283 BC, his son Ptolemy II Philadelphus built the other structure which defined the city: the Great Lighthouse of Alexandria. This was listed as one of the seven wonders of the world, and it signified not only the importance of the city but the importance of trade and commerce as well.

The lighthouse actually stood for a surprisingly long time. It was destroyed by earthquakes in the early 14th century. Believe it or not, you can actually still see the ruins of the lighthouse underwater. I went SCUBA diving in Alexandria back in 2009 in the harbor and you can easily see the massive stones as well as some sphynx statues underwater.

The Library of Alexandria was started under Ptolemy and grew over the centuries. It wasn’t an architectural wonder like the tomb or the lighthouse, but it did culturally define the city perhaps more than anything else.

It wasn’t the first library in the ancient world, but it was almost certainly the largest. This was due to its status as a major trading hub, and the standing rule of the city than any ship which arrived in port was to have any books on board taken to the library where they would be copied.

While the library has gotten all the attention, it was part of a larger complex called the Musaeum, which is Greek for the Institution of the Muses. It is the origin of the English word museum. The musaeum was the ancient equivalent of a university. This was the real intellectual center of the city where scholars would come to study anatomy, astronomy, poetry, languages, music, and more.

This, of course, will all be dealt with in more detail in a future episode.

Alexandria became sucked into Roman politics when the Roman General Pompey was defeated by Julius Caesar and fled there. Caesar followed, only to find Pompey killed, and he met the young queen of Egypt Cleopatra. This was when the great fire at the Library of Alexandria occurred.

The result was Egypt becoming a protectorate of Rome, and years later Mark Anthony went there to take Cleopatra as a wife, and then they were defeated by Octavius, and Egypt became a Roman province.

Under the Romans, initially, Alexandria didn’t lose any of its importance. It was still the capital of Egypt, and arguably more important than Rome in some respects. It was richer and culturally more vibrant.

Over time, the musaeum became less important as a center for learning, and Alexandria became a center for Christian theology.

With the collapse of the Western Roman Empire, Alexandria remained the second most important city in the Byzantine Empire after Constantinople. It became the center of the Coptic Church, which is a distinction it still has today.

Byzantine rule wasn’t to last very long. By 641, the city was conquered by the Arabs.

This began a long decline for the city. Cairo was a much more important city for the Islamic rulers as a center for Islamic learning and a capital city. A new Islamic port city of Rosetta, located just 40 miles east of Alexandria, lessened Alexandria’s importance as a center of commerce.

Over the centuries the city changed hands several times, with brief periods of pirate or crusader rule, but it was mostly under Arab control until the year 1517 when it was conquered by the Turkish Ottoman Empire.

By the end of the 18th century, Alexandria had become a small town, however, it still had a part to play in world affairs.

Napoleon invaded in 1798 as part of his Egyptian Campaign, and the British fought the French there at the Battle of Alexandria in 1801. French assessed the population of the city at this time as being between 8,000 and 15,000 people.

The city began growing again in the 19th and 20th centuries. The British kicked out the Ottomans in 1914 as part of the First World War. It was the primary objective of the Germans and the British in the North Africa Campaign of the Second World War.

Egypt became independent in 1952 after a massive uprising against the British in Alexandria and the overthrow of Egyptian King Farouk at his palace in the city.

Today, Alexandria is again one of the largest cities in the world. It is the largest city on the coast of the Mediterranean Sea, and the seventh-largest city in Africa, with a population of 5.2 million people.

In 2002, a new Library of Alexandria was opened. Known as the Bibliotheca Alexandrina, it is the architectural centerpiece of the modern city and it is located right on the coast.

Even though Alexandria was one of the most important cities in the Ancient world, there aren’t a lot of ancient ruins to see. It doesn’t have anything like the Acropolis in Athens or the Colosseum in Rome. There are some things that are visible, but most of the iconic structures were destroyed or have been buried under centuries of urban development.

Nonetheless, Alexandria is a great place to visit and it is often overlooked in favor of cities with ancient Egyptian temples and tombs. Its seaside has dozens of great restaurants, and there still are some ancient ruins you can visit. And of course, if you SCUBA dive, you can actually see one of the seven wonders of the ancient world.