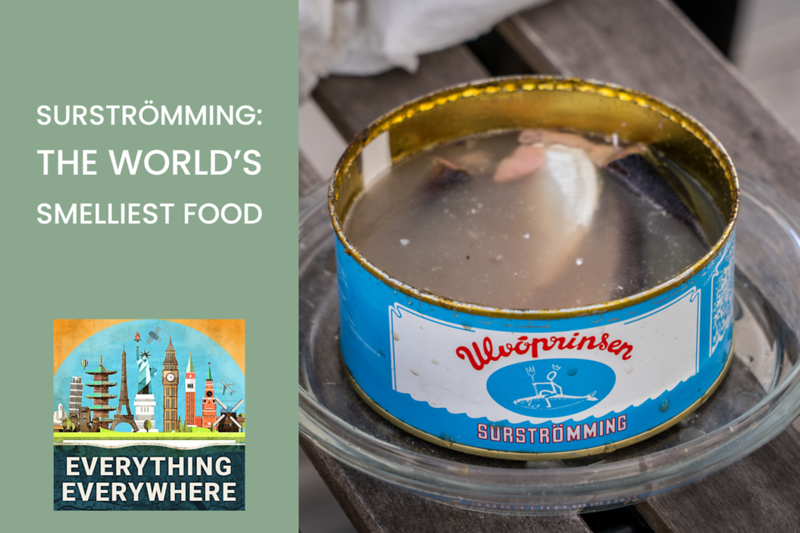 There are many foods that are considered an acquired taste. Foods that might not be very palatable the first time you try it, or something that just doesn’t sit right with most people.

It could be something as simple as blue cheese, or something like the Filipino delicacy, balut, which is a boiled, fertilized egg with the embryo still inside.

Sweden has its own acquired taste delicacy which has spawned hundreds of reaction videos and caused it to be banned by airlines.

Learn more about surströmming, the world’s smelliest food, on this episode of Everything Everywhere Daily.

My audiobook recommendation today is The Almost Nearly Perfect People: Behind the Myth of the Scandinavian Utopia by Michael Booth.

Journalist Michael Booth has lived among the Scandinavians for more than 10 years, and he has grown increasingly frustrated with the rose-tinted view of this part of the world offered up by the Western media. In this timely audiobook, he leaves his adopted home of Denmark and embarks on a journey through all five of the Nordic countries to discover who these curious tribes are, the secrets of their success, and, most intriguing of all, what they think of one another.

Why are the Danes so happy, despite having the highest taxes? Do the Finns really have the best education system? Are the Icelanders as feral as they sometimes appear? How are the Norwegians spending their fantastic oil wealth? And why do all of them hate the Swedes?

The word surströmming in Swedish literally means “sour fish” and that is probably an understatement.

That in and of itself doesn’t sound that bad. There are many fermented foods that we eat and we have no problem with them. Yogurt, sauerkraut, and kimchi are all fermented foods and no one freaks out at the idea of eating them.

Fermentation is an ancient form of food preparation by the breakdown of food via microorganisms like bacteria and yeast.

All well and good.

But there is another process of the breakdown of food via microorganisms. That is called rotting.

Surströmming toes the line between fermentation and rotting.

The history of surströmming goes back to at least the 16th century when we can find the first written mention of the food. However, the food might very well be older than that as fermentation is a pretty old process.

The legend of surströmming holds that it was accidentally created by fishermen who didn’t have enough salt to preserve their catch. They used less salt than normal and sold their fish to some locals in Finland. Salt is used to inhibit microbial growth and stop the fish from rotting.

When the fishermen returned, they thought that the locals would be mad at them for selling them fish that rotted. Instead, they loved the product and wanted more of it. They tried the fish themselves and thus, surströmming was born.

Today surströmming is prepared and purchased in a can. While in the can, the fermentation process continues. Fermentation results in the release of gasses, which means that the can will often be bulging due to the high pressures inside the can.

The fermentation of the fish in the can results in the singular most unique quality of surströmming: the smell.

In 2002, a Japanese study found it to be the worst smelling food in the world.

The smell is so bad that it has become legendary. It has been described as rotten eggs, a dead body, a dirty diaper, and raw sewage, but the truth is there are few things you can really compare it to because nothing else smells quite so bad.

The smell is what has made surströmming famous, and if it weren’t for the horrid smell, it would be about as controversial as pickled herring.

Children in Sweden have been known to open a can of surströmming in school so they could get out of class.

Airlines will not allow people to carry surströmming on flights. Because of the high pressure in the can and the low pressure in the cabin, the higher pressure differential can result in some cans rupturing, spewing the smelly liquid into the plane…and it isn’t as if you can leave a plane while its flying or open a window.

Most famously, a landlord in Germany evicted a tenant because they spilled a can of surströmming in the building’s stairwell.

German laws make it very hard to evict people. When the eviction came to trial, the landlord’s defense consisted of opening up a can in the courtroom.

The judge, having experienced the overwhelming odor, ruled in favor of the landlord.

If you do a search for surströmming online, you’ll find dozens and dozens of reaction videos of people opening up cans and trying to eat the contents

The videos mainly consist of gagging, retching, and sometimes vomiting.

The problem according to the surströmming experts, is that they are eating it wrong.

For starters, you never want to open a can of surströmming indoors for reasons which I think I’ve established by now.

Ideally, you want to open the can when submerged in water. That will prevent the liquid inside from spraying out all over the place. Alternatively, you could open it while it is enclosed in a plastic bag.

Once the liquid has been drained, you don’t eat it straight from the can. The herring which is put in the can hasn’t been gutted or deboned. You need to do that first.

Then the traditional way of eating it is with a Swedish flatbread called tunnbröd, along with potatoes, onions, and sour cream. It is usually eaten as a sort of small sandwich.

I’ve actually had the experience of trying surströmming, and it really doesn’t taste as bad as it smells. Granted, given that is it the worst smelling food in the world, that is a pretty low bar, but it isn’t bad so long as it is prepared properly.

If you really want the full surströmming experience, I’d have to suggest you visit the Island of Ulvön on Sweden’s High Coast. It is a center for herring fishing, and it is considered the Mecca for surströmming.

August is considered the best season for surströmming, and because it’s in the middle of summer, one of the best times to visit Ulvön, regardless. The main day for eating it is the third Thursday of August, also known as Surströmming Day, which is the day which by royal decree you used to be able to start selling that year’s surströmming.

If you are there, you might be able to meet Ruben Madsen, who is the self-proclaimed King of surströmming. He was the person who actually served me my first surströmming when I visited Ulvön.

Back in 2014, he was involved in opening a 25-year-old can of surströmming which was found in an abandoned cabin in Norway. Having been outside for a quarter of a century, the can was quite rusted, and due to 25 years of fermentation, it was bulging. A lot.

The contents of the container were mostly liquid. What solid material that came out didn’t really look anything like fish.

I’ve had several people reach out to me on Instagram because they didn’t know how to reach me via email. If you like to send me an email, you can reach me at [email protected].

If you have show suggestions or a question you would like me to answer in an episode, feel free to drop me a line.