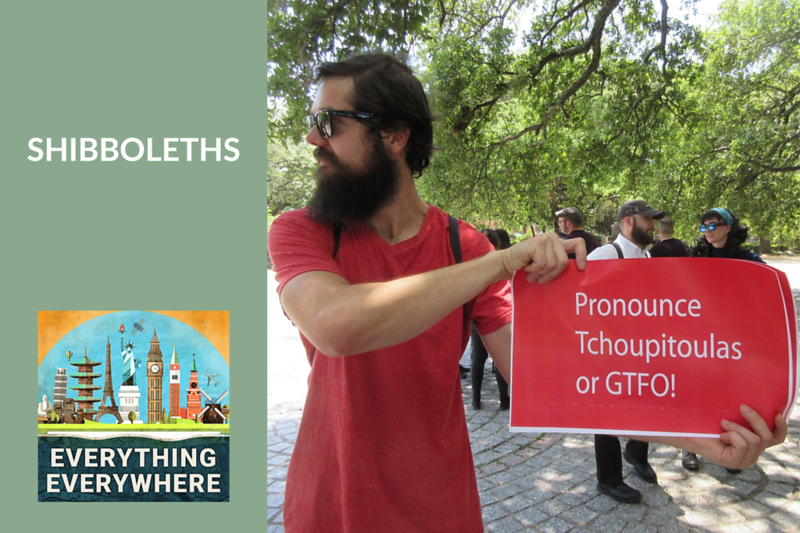 Have you ever met someone who couldn’t pronounce the name nearby town, or they just spoke different enough that you could tell that they were from somewhere else?

If so, you have probably learned about shibboleths without even knowing it. These differences in speech have been used to identify people for centuries.

Learn more about shibboleths, what they are and how they have been used throughout history, on this episode of Everything Everywhere Daily.

If you are a regular listener to this podcast, you definitely are a person who is intellectually curious. If that describes you, then you need to get a subscription to CuriosityStream.

CuriosityStream has documentaries on a wide variety of subjects covering almost everything you might have an interest in. You’ll find dozens of shows on economics, history, biology, technology, physics, culture, and philosophy.

Plus, they have tons of original programming which are being released on a regular basis.

My personal relationship with the word shibboleth dates back to when I was coaching high school debate in the early 90s. We were doing research and we came across the phrase “hoary shibboleth” and we had no idea what we meant. Neither are words that you encounter in everyday conversation.

However, for this discussion, and the meaning of the word in English, its original meaning isn’t really relevant.

In the Bible, the word shibboleth was used by the ancient Israelites as a sort of password. The story comes from the Book of Judges, chapter 12, verses 5-6. It reads:

The Gileadites captured the fords of the Jordan leading to Ephraim, and whenever a survivor of Ephraim said, “Let me cross over,” the men of Gilead asked him, “Are you an Ephraimite?” If he replied, “No,” 6 they said, “All right, say ‘Shibboleth.’” If he said, “Sibboleth,” because he could not pronounce the word correctly, they seized him and killed him at the fords of the Jordan. Forty-two thousand Ephraimites were killed at that time.

The Ephraimites couldn’t pronounce the “sh” sound because their language didn’t have it. When they tried to say shibboleth they would say sibboleth.

Here I want to give a fair warning that I’m probably going to mispronounce a whole bunch of words in this episode, as the whole point of this episode is how words can be used to identify people in groups. As I’m not in most of these groups I’ll be talking about, I will naturally butcher the pronunciation.

There are a surprisingly large number of examples of shibboleths throughout history, with examples both major and minor. In fact, there are probably some very minor examples that you know of that apply to where you grew up.

In 1302, in what is today the Belgian city of Bruges, it was occupied by the French. On May 18, in a surprise, nighttime attack, all of the French in the town were rounded up. They went to all the homes where the French soldiers were lodged and woke up all of the men.

As they couldn’t tell the French from the Flemish in the middle of the night, they asked them all to say the Dutch words for “shield and friend”. The French couldn’t pronounce it correctly, and those who couldn’t say it was killed on the spot.

From 1515 to 1523 there was an uprising in the Friesland region of the Netherlands against the Hapsburgs which controlled it. The leader of the uprising was a man named Pier Gerlofs Donia. They would attack ships off of the coast and ask the sailors to say the sentence “Butter, rye bread and green cheese, whoever cannot say that is not a genuine Frisian”

During the wars of independence in Latin America, revolutionaries in Colombia would use langue to determine who was a local and who was Spanish. They would make people say the world Francisco.

During the reign of dictator Rafael Trujillo in the Dominican Republic, there was an event called the Parsely Massacre which took place in October 1937. Dominican soldiers rounded up Haitians by getting them to say the Spanish word for parsley, “perejil”.

One of my favorite shibboleths was from world war II and again it involved the Dutch.

The Dutch would use the name the a seaside town located near the Hague called Scheveningen.

The Germans, and pretty much everyone else for that matter, can’t pronounce the word properly. The glottal sounds that Dutch use doesn’t exist in German.

Likewise in world war II, the Americans used the word lollapalooza in the Pacific as a challenge code as the Japanese had a hard time pronouncing the letter “L”.

Shibboleths can be used to separate people who are otherwise very similar to each other.

In Northern Ireland, there have been conflicts between Catholics and Protestants for years. By all outward appearances and even by language, it would be difficult to tell one from the other. It was a matter of religion, not language or ethnicity.

During the Vietnam War, Americans who fled to Canada to avoid the draft would often try to sneak back into the US by pretending to be Canadians. American border agents would ask them to say the alphabet as fast as they could.

Speaking of Canadians and Americans, if you don’t know if someone is Canadian or American it can be very difficult to tell them apart.

One way which really doesn’t work is the word “about”. There is a stereotype that Canadians will pronounce it “aboot”, and honestly you won’t find too many who say it in such an exaggerated manner.

When referring to the country south of the border, Canadians will often call it “the states”, whereas an American will almost never call it that.

These things are pretty easy to change if someone wanted to. I’ve had quite a few discussions with Canadian friends if it was possible to create a shibboleth for Canadians.

If Canadians wanted to ferret out an American, it would be pretty easy to do. Americans don’t know nearly as much about Canada as Canadians do about the US.

Questions about American sports or politics might not trip up most Canadians, but most Americans couldn’t tell you a thing about Canadian football or Canadian politicians.

The question was, what would most Americans know that most Canadians wouldn’t know. The one thing that we’ve come up with, and really one of the only things we could think of is the pledge of allegiance. Most Americans learned to recite it growing up, and most Canadians only might know the first line from movies and TV shows.

Shibboleths can get even more subtle to tell differences between people from different states or towns. You can probably think of some for wherever you live.

Australians and New Zealanders can tell themselves apart by subtle pronunciations like how they pronounce “fish and chips”.

I was born and raised in Northeast Wisconsin and then went to school in Minnesota. You might not think that there is much difference between Wisconsin and Minnesota, but there are, even though they are very small.

As children, you might have played the game duck, duck, goose. In Minnesota, they don’t play that. They play duck, duck, grey duck. Again, very small, but it’s there.

Likewise, where I grew up, we didn’t call water fountains that you drink from water fountains. We called them “bubblers”. It is a very very regional thing that most people don’t even know about.

Another thing we have is lots of rather complicated sounding places with Native American names. I grew up with them so have no problem with Wauwatosa, Kaukauna, Oconomowoc, Weyauwega, Chequamegon, Mukwonago.

The words themselves aren’t hard to pronounce per se, but almost everyone who isn’t from Wisconsin will butcher the pronunciation if they try reading it.

These sort of place name pronunciations are hardly unique to where I’m from. New Orleans has Tchoupitoulas (CHOP-i-TOO-l?s) Street, which there is no way you would know how to pronounce if you didn’t know it beforehand.

Shibboleths can extend to religions, companies, academic disciplines, and schools. I’m sure in the course of listening to this, you can think of pronunciations or words you use which would distinguish the place you live or the groups you are in.

They are really everywhere. Both how we pronounce words and what words we use signify who we are and where we’re from.